Gene Hackman became one of the most important actors of his generation in the 1970s. At that times, and really throughout his career, Gene Hackman movies were the sign of something artistically sound, films written and directed by some of the best in our business. Playing characters like Lex Luthor and Popeye Doyle, he became iconic, but it was his mastery of craft even in smaller, auteur-driven films that made him one of the most beloved actors of his generation. Gene Hackman films include some of the most acclaimed works of all time: “The French Connection,” “Unforgiven” “Bonnie and Clyde,” “The Royal Tenenbaums,” and so many more.

Gene Hackman was born in San Bernardino, California on January 30, 1930, and his one brother. He moved a lot when he was a child, but grew up most in the Midwest, living in Danville, Illinois. Gene Hackman’s age when he decided he wanted to be an actor was only ten, but he entered the United States Marine Corps. first, serving four and a half years, stationed in China whan the Communist Revolution happened there in 1949. He joined the Pasadena Playhouse in 1956, where he became a close friend of another actor there, Dustin Hoffman. In fact, the two would also become friends with another struggling actor in the area, Robert Duvall. They even shared apartments after moving to New York in the ‘60s. 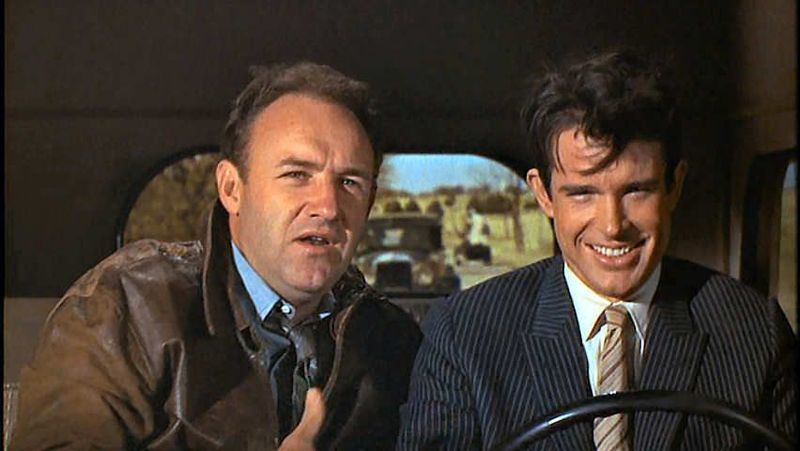 A young Gene Hackman started his career in the early ‘60s with guest roles on TV and some stage work, but his first film role came in “Lilith,” co-starring Warren Beatty. The two would team again on one of the most famous Gene Hackman movies, 1967’s “Bonnie and Clyde,” which landed the young Gene Hackman his first Oscar nomination for Best Supporting Actor. He bounced around stage, film, and TV in this era, reportedly even being offered the role of Mike Brady in “The Brady Bunch,” which he nearly accepted. 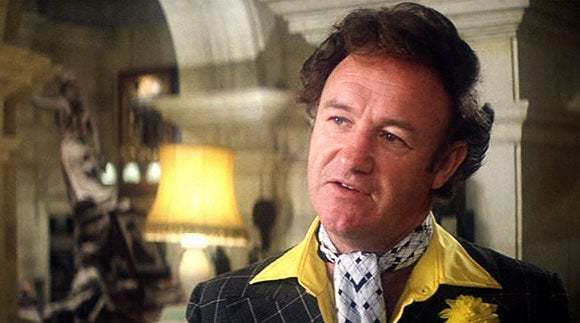 The 1970s were the most vital era for Gene Hackman films, starting with an Oscar nomination for “I Never Sang for My Father,” followed by arguably the role for which he will be most-remembered, Popeye Doyle. In William Friedkin’s “The French Connection,” he plays Jimmy “Popeye” Doyle, and it not only landed him his first lead actor Oscar nomination, but his first win. And he was just over forty, about to begin a lengthy stretch as one of the country’s most famous actors.

From there, Gene Hackman movies could be anything. They could be an action film like “The Poseidon Adventure,” a great classic like “The Conversation,” often named on any list of the best spy movies, or even a comedy like “Young Frankenstein”.

He would reprise his role as Popeye Doyle in “French Connection II,” and who didn’t love Gene Hackman in “Superman”? As Lex Luthor, the Oscar winner found a whole new generation of fans and played the role again in sequels in 1980 and 1987. 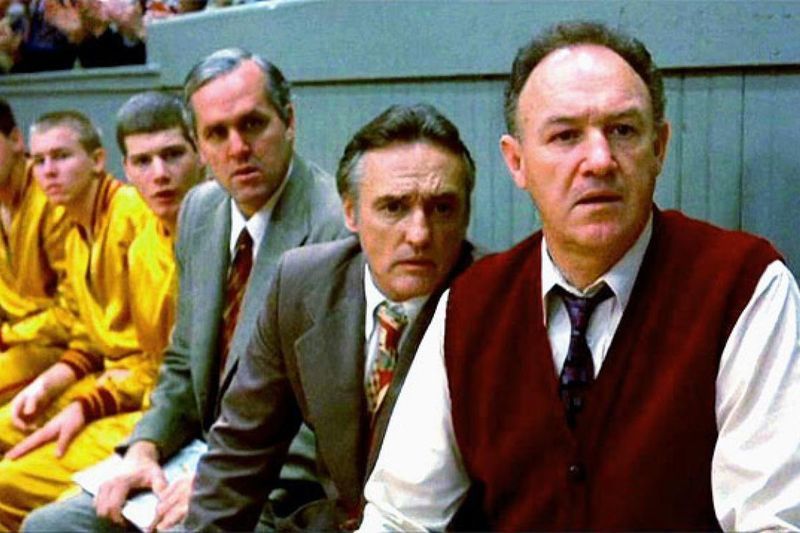 The 1980s weren’t as vital for Gene Hackman films as the decade before, but the actor really kicked off the decade reuniting with old friend and colleague Warren Beatty on the actor-director’s “Reds,” which won the Oscar for Best Picture. He would also star in one of the most beloved sports films of all time when Orion Pictures cast Gene Hackman in “Hoosiers.” Other 1980s Gene Hackman movies include “No Way Out” and “Mississippi Burning,” which netted Gene Hackman another Oscar nomination. 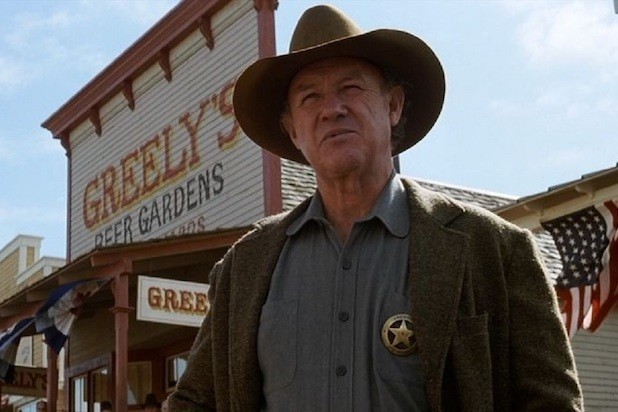 Another iconic role for Gene Hackman came when Clint Eastwood cast him in “Unforgiven,” a film that would go on to win Best Picture and net the actor his second Oscar for Best Supporting Actor. Already firmly ensconced as one of the best actors alive, Gene Hackman movies of the 1990s include “The Firm,” “The Chamber,” “Wyatt Earp,” “The Quick and the Dead,” “Crimson Tide” and “Absolute Power.” Gene Hackman also starred in a film many considers one of the best spy movies, riffing on his own “Conversation” protagonist in “Enemy of the State.” Another beloved entry in the canon of Gene Hackman films in this era is his comedic turn with Robin Williams and Nathan Lane in “The Birdcage.”

Gene Hackman continued to bounce around genres and budgets into his fifth decades in the business. Hit Gene Hackman films of the era include “Heist,” Wes Anderson’s “The Royal Tenenbaums,” another Grisham film in “Runaway Jury,” and 2004’s “Welcome to Mooseport,” which ended up being the last of the Gene Hackman movies.

The Most Critically-Acclaimed Gene Hackman Movies (per Rotten Tomatoes)

“I Never Sang For My Father”

“You go through stages in your career that you feel very good about yourself. Then you feel awful, like, 'Why didn't I choose something else?' But overall I'm pretty satisfied that I made the right choice when I decided to be an actor.”

“If I start to become a star, I'll lose contact with the normal guys I play best.”

“My grandfather had been a newspaper reporter, as was my uncle. They were pretty good writers and so I thought maybe somewhere down the line I would do some writing.”

A tribute to the great Fred Ward.

An essay about Wes Anderson's The French Dispatch, as excerpted from the latest issue of Bright Wall/Dark Room.

Bright Wall/Dark Room December 2021: I’ve Had a Rough Year, Dad: The Unbearable, Beautiful Messiness of One Line in The Royal Tenenbaums by Matt Chambless

This month's excerpt from Bright Wall/Dark Room on The Royal Tenenbaums.

A tribute to the late, great Richard Donner.

A tribute to Ned Beatty.

A look at the staying power of Alan J. Pakula's The Parallax View and the age of conspiracies.

A tribute to the legendary director Michael Apted.

A Far-Flung Correspondent looks back at Alan Parker's powerful visual presentation of racial hatred and its virulent terror.

How The Poseidon Adventure Got Me Hooked On Movies for Life

Far-Flung Correspondent Gerardo Valero reflects on one of his favorite movies, The Poseidon Adventure.

There's a moment when you get lost in a memory so intense that when you emerge, you aren't sure if you've been spacing out for a second or a minute. That's where Nicolas Roeg's cinema lived.

After all these years it’s hard for me to say if “Earthquake” is either a guilty pleasure or a movie so bad that it’s good.

A book excerpt from "Guillermo del Toro's 'The Devil's Backbone.'"

Man on the Outside: The Films of Willem Dafoe

A look at the career of Willem Dafoe.

It's About Us: The Legacy of "Bonnie and Clyde"

Much More than "Star Wars": The Cinema of '77 Strikes Back at Film Society of Lincoln Center

An in-depth look at an ambitious retrospective at NYC's Film Society of Lincoln Center that celebrates one of cinema's greatest years.

A look at three films from Cannes from our very own critic, Simon Abrams.

Rest in Peace, Al Nalbandian; Merging of Hollywood and China; Nnedi Okorafor on whitewashing; Decline of the Western; Kristen Stewart on bisexuality.

Ebertfest Flashback: Donald O’Connor on “Singin’ in the Rain”

The transcript and video of Roger Ebert's onstage conversation with Donald O'Connor at Ebertfest 2003.

Man on the run: the haunted grace of "The Fugitive"

A classic thriller that moves with a sense of purpose.

An FFC essay on Woody Allen's "Another Woman."

Anthony Daniels on "Star Wars VII"; History of Action-Movie Heroes; Love in the films of Jacques Démy; Emma Thompson on Trump; How Netflix could change the movie business.