It is a jungle out there in Hollywood, and "Get Shorty" presents the various kinds of animals residing at the lower strata of that jungle through a pungent but cheerful satire about one nutty pre-production process. Almost everyone in the movie wants at least one sweet slice of success while aspiring to move on to higher places in Hollywood, and, driven by greed and ambition, some of them are willing to do anything for that. The movie humorously juggles these people around a cool, clever, and charming hero, and we are amused to find that he is well-qualified to be a Hollywood producer because, as a smart criminal, he exactly knows what he has to say or do for getting what he wants.

He is Chili Palmer (John Travolta), a small-time loan shark operating in Miami, Florida. He has recently become a subordinate to a local mob guy named Ray 'Bones' Barboni (Dennis Farina) after the untimely death of Chili's New York boss, so now he has to take care of Barboni's loansharking business, although he dislikes Barboni a lot for many reasons. During the prologue scene at a local restaurant, he is angry to know that Barboni has taken his precious jacket without telling him, and that is led to the first terrific comic moment of the film.

Chili is ordered to collect a $18,000 debt from a dry-cleaner named Leo Devoe (David Paymer), who was allegedly dead due to an unfortunate plane crash. Through a cordial talk with Leo's wife, Chili quickly finds that Leo has a $300,000 life insurance on himself and he is very much alive and hiding somewhere with the insurance money. He tracks down Leo to Las Vegas without much difficulty, and he also learns that Leo went to LA after getting himself into a minor trouble at one of the casinos.

And then, as a big movie fan, Chili finds a very tempting opportunity for him in LA. As a small favor to his casino manager friend, he makes a surprise night call on a B-horror movie producer Harry Zimm (Gene Hackman) for collecting his casino debt when Harry is at the home of Karen Flores (Rene Russo), a struggling actress who previously appeared in some of Zimm's trashy horror films including "Slime Creature" and its two sequels. It turns out that Zimm is in a very difficult circumstance; besides owing lots of money due to his reckless gambling, he also threw away $200,000 given by his shady investors for producing another cheap horror film, and it is only a matter of time before they will ask him about the money – and they are not very nice guys. 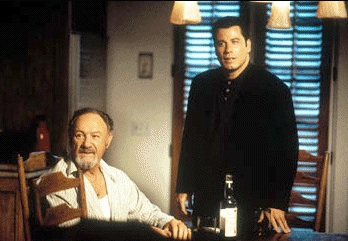 After having some good night chat with Harry on whether they can a movie based on Chili's latest task, Chili quickly insinuates himself into Zimm's business as his associate/fixer and, surprise, he is very good at his new occupation because, after all, crime business is not so different from movie business. Mainly fueled by greed and opportunism, both businesses require wits and guts to manipulate others for survival and benefit, and, needlessly to say, Chili has plenty of them for maneuvering others from one thing to the other thing while helping Zimm's new project based on a very promising screenplay named "Mr. Lovejoy," which will possibly give them a big break in the town if everything goes right as they want.
Advertisement

The movie is based on the novel by Elmore Leonard, who is regarded by many as one of the great American crime novelists. He has been writing numerous enjoyable crime novels decorated with twisty fun plots and colorful criminal figures, and "Get Shorty" is no exception. As the story gleefully moves around several turns and surprises, the conversations between his talky characters are accompanied with wits and humor to draw us into their world and their story. It is no surprise that Quentin Tarantino cited Elmore Leonard as one of the major influences on him as a writer; "Pulp Fiction" (1994) was as good as Leonard's best works can be in many aspects, and his next film "Jackie Brown" (1997) was loosely based on Leonard's novel "Rum Punch."

The adapted screenplay by Scott Frank, who would later work on another of Leonard's novels in "Out of Sight" (1998), is mostly faithful to the novel while retaining much of its lively spirit. The story gets more complicated as more characters coming into its busy picture, but the movie seldom loses its sense of fun while generating good laughs from the selfish and cynical denizens of Hollywood who follow their Darwinian instinct with very little concern on morality or ethics whenever they smell a potential of next big success. In case of Karen, who is tired of being cast as a scream queen "walking around in f*ck-me pumps and a tank-top", she is in bed with Zimm for getting better acting role when Chili slips into her house at night. She is skeptical about Chili like any jaded Hollywood people would be, but, when she discerns a good opportunity from Chili and Zimm's ongoing project, she actively joins them as a production partner who can introduce and connect them to Martin Weir (Danny DeVito), a major star and two-time Academy winner who is also her ex-husband ("….and I'm wondering: how did it all slip away?" "Well, it didn't slip away, Martin. You did, when you went off to sleep with Nicky at my birthday party.").

It is rather unbelievable that the witty dialogue derived from Leonard's novel could have been downgraded to the bland ones during the pre-production process, for the comic moments in the film largely depend on how quick and smart the dialogue is. They are enjoyable enough to make a good audio book, and I was especially tickled by a funny conversation on the difference between e.g. and i.e. The movie is also sprinkled with several movie references, and some of you may appreciate the poster of "The Thin Man" (1934) at Chili's Miami office or a small scene in which Chili and Karen watch the finale scene of "Touch of Evil" (1958) together at a local theater.

Considering their delightful performances, it is apparent that the actors had lots of fun with their characters and juicy dialogues. Right after his comeback performance in "Pulp Fiction", John Travolta solidified his career rejuvenation with this film. He injects lots of likability to Chili through his own star presence, and Chili comes to us as a nice, pleasant guy who can amiably talk with you a lot about movies even if he comes to you for his rough business matters. As the smartest and coolest person in the story, this courteous tough guy can grip your attention by merely saying 'look at me', and the laid-back confidence in Travolta's magnetic performance makes us believe that Chili will get whatever he wants from others even if he faces meddling complications in his scheme.

As a hapless and hopeless movie producer Harry Zimm, Gene Hackman is an effective counterpoint to Travolta's cool performance. Hackman plays his silly character completely straight, and that is why his performance works. Zimm thinks he can handle his circumstances even though they are way over his head, and, unfortunately for him and his body, this buffoonish guy is not aware of that at all. 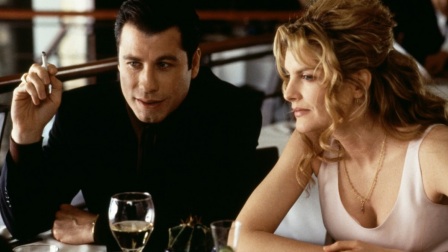 Rene Russo has good chemistry with Travolta as a practical actress who finds herself attracted to Chili while staying on business mode. When they have a private talk at her house in the sunset, both perceive it well that their moment feels like being in a movie – but they gladly roll to the next base anyway.

As the supporting character crucial to their plan, Danny DeVito may look a little too short as a major Hollywood star, but he brings an ample amount of personality and ego to his role. His presence hovers over the story as a little running visual gag throughout the film, and he has the funniest scene in the movie where Weir attempts to look like an authentic loan shark in front of Chili and Karen during their private meeting at his mansion. We cannot help but laugh at this sight, for, as being coached by Chili, he is absolutely concentrated on giving a short but credible performance as a dedicated professional (A small bit of trivia: it was said that this character was inspired by Leonard's private experience with Dustin Hoffman). 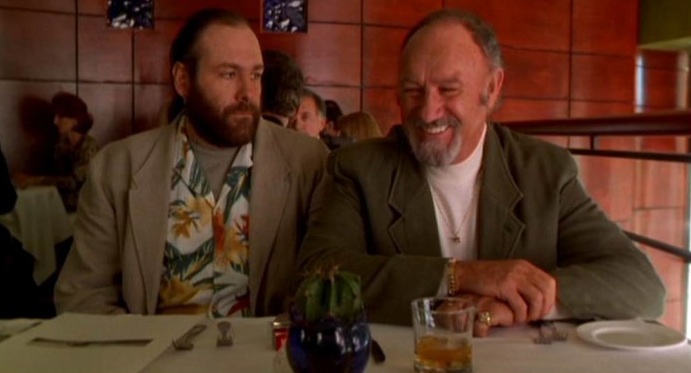 The movie also pays considerable attention to other supporting characters, and it is a pleasure to watch reliable veteran actors like Dennis Farina, David Paymer, Delroy Lindo, James Gandolfini, and Bette Midler, who has a hilarious scene with Hackman as your average middle-aged Hollywood seductress craving for, uh, a man's touch. With the comically injured nose on his face, Dennis Farina is boisterous with his expletive lines as a mean mob guy who, according to Chili, does not like movies (but, like others, he is somehow drawn to that irresistible charm of Hollywood). Delroy Lindo is a drug lord who immediately assumes the attitude of Hollywood studio executives as soon as he comes across a chance to get involved in movie business, and James Gandolfini, who was few years before acclaimed TV series "The Sopranos" when the movie came out, gives a sympathetic performance as Lindo's henchman Bear, a bulky stunt man who discovers that he is not as imposing as he looks through a few dismal encounters with Chili.

The director Barry Sonnenfeld once gave me one of the most embarrassing movie theater experiences during my adolescent years through that disastrous mess "Wild Wild West" (1999), but he has consistently made good comedy products including "Men in Black" (1997) and "The Addams Family" (1991), and "Get Shorty" remains as his best work. Under his slick direction, the movie smoothly rolls out its increasingly intricate plot as aided by the spunky jazzy score by John Lurie, and I particularly enjoyed the way the camera flexibly moves around to present several things going on in different directions during one brief but busy shot.

As we come to see the overall picture of what is going on in the story while having fun with it, it gradually revolves around a questionable luggage locker at the LA airport as its center, and the movie is never slows down as the screenplay brilliantly pushes its set pieces toward the finale without a hiccup. Lots of things happen around the characters during the last 20 minutes, but everything is organically progressed according to the characters' natures, and we come to appreciate the finale as an ironic punch line for its comic story and its subject.

I watched "Get Shorty" for the first time in 1996, and I was just an adolescent kid who had become a little more serious about watching movies around that time. I was mildly entertained by it during the first viewing, but, after watching lots of movies for many years and learning some little things about Hollywood, I found myself far more amused while I revisited this funny black comedy. To be frank with you, while chuckling during the scene in which Chili kindly explains to the other character how he confused "El Dorado" (1966) with "Rio Bravo" (1959), I felt an urge to write the additional line for that scene: "And you made a wrong movie reference like Alan Rickman in "Die Hard" (1988), you doofus. Do you remember what happened to that guy, by the way?"