Rally 'round the Cruise, boys! 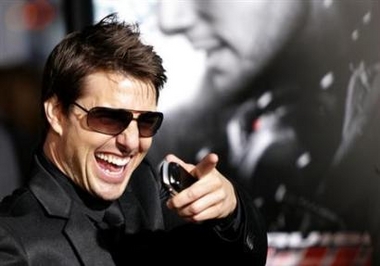 At first I wasn't going to write anything about last weekend's "disappointing" domestic grosses for "M:I:III" (or, as Stephen Colbert pronounces it, "Miiii"), because, well, who really cares about the box-office numbers of movies like "Miiii" (or Celebs Who Act Out)? Especially when "24" gives you trickier plotting, more believable stunts, top-flight production values, first-class actors (Kiefer Sutherland, Mary Lynn Rajskub, Stephen Spinella, William Devane, Ray Wise, Jean Smart...) and characters for whom you can actually feel something besides an indefinable creepy revulsion (though some have that quality, too), week after week (and in digital surround and HDTV, no less) -- making pre-packaged, pre-fab disposable summer action products like "Miiii" seem as dinosaurish and unnecessary as they truly are. (Note to self: How do I really feel?)

But then I saw this headline above a Reuters story Thursday: "Hollywood friends rally around Tom Cruise." Yes, dear readers, Tom needs some friends just now (if only, evidently, to buy batches of opening-weekend tickets to "M:I:III" at the Scientology Celebrity-Center-adjacent ArcLight Theater in Hollywood). It was too absurd to pass up.

So (he said wearily), let's recap:

His Cruiseness's public "approval ratings" (says a USA Today opinion survey) are way down there with the likes of...George W. Bush:

... according to a USA TODAY/Gallup Poll over the weekend when "Mission: Impossible III" opened to $47.7 million, about $12 million less than expected, the public has lost its loving feeling for Tom Cruise.

When 1,013 adults were asked their opinion of Cruise, 35% were favorable and 51% unfavorable. Nearly a year ago, when War of the Worlds opened on July 4 weekend to $77 million, the rating was 58% favorable and 31% unfavorable. (Sampling error is plus or minus 3 percentage points.)

"MI3" [Finke's spelling of the inscrutable title] has been shaping up as referendum more than recreation. That's because the opening box office numbers would gauge Tom Cruise's viability given all that bad press he's getting (most of it his doing). There's always been an imbecilic debate in Hollywood whether bad pre-release buzz can harm a movie's financial prospects. But that focused on the content or cost or production of the movie. "MI3" had an altogether different dilemma focusing on Cruise personally: his Scientology, his girlfriend, his bizarre behavior. Today, Hollywood players told me they blamed Cruise for the poor "MI3" opening....

Still, as much as Cruise's career may be down around his ankles, I was confident the May 5th opening wouldn't be "Waterworld" redux. It would follow the summer pattern: the earlier a film is released in May, the better the box office. But, in the final analysis, "MI3"'s first weekend was near disastrous.

And then there was this, from that awful E! gossip Ted Casablanca (of "The Awful Truth"), who had the temerity to suggest that Cruise's relationship with the mother of his child, Katie Holmes, was nothing but a (disastrous) public relations sham -- like Michael Jackson and Lisa Marie Presley, or something!

According to a source who plans everything from Mr. C.'s vitamin schedule to his glad-handing duties (gosh, which one's more exhaustive, the former or the latter?), Katie Holmes and Tom C. are working out, as we cyber-gossip, a respectable amount of time to remain together after [baby] Suri's arrival, until they will call it quits.

"They are not getting married," insists this Cruise insider. "Won't happen."

How bad are things for poor Tom Cruise? Well, on Kathy Griffin's stand-up special "Strong Black Woman" (which debuted on Bravo this weekend), she asked a roaring crowd:

How much fun is the Tom Cruise meltdown? Here's my favorite thing about it... He's so crazy the gays don't want him anymore. They don't want him. They don't care... I love how the gay guys only want hot guys to be gay, right? They want Gyllenhaal, they want Ledger, they want Colin Farrell. Here's what you'll never hear from one of the gays: "Oh, girl. Don't be naive. Don't tell me you don't know about Miss Gene Hackman."

So, in the face of all this (and I think it's that last one that really made 'em freak about Cruise's popularity; as Griffin might say: "As go the gays, so goes the nation..."), what's a mega-rich-and-famous movie star dad to do? Call out the big guns who have tons of money riding on him to defend his marquee value! From Reuters:

In a rare public show of support for a beleaguered star, some of Hollywood's top executives rallied to Tom Cruise's side on Wednesday as a new poll suggested his odd behavior in recent months may have cost him millions of dollars at the box office.

"Tom Cruise is one of the most important stars ever in the motion picture business," Ron Meyer, a close friend and former agent, told Reuters. "I don't know anybody who has had the consistent success rate that Tom has. And nobody should be counting him out."

Added Grey: "He is clearly, on a profit basis as well as a creative basis, one of the biggest stars in the world."

OK, you tell me: Does all this hysterical, over-the-top, defensive fuss make the publicity look better or worse for Tom Cruise and "Miiii"? Be sure to let me know when we're all supposed to start feeling sorry for him. So we can commence building him back up for the next tear-down...