"'The secrecy has been ludicrous': 'Star Wars' actor Anthony Daniels on the new film and his life as C-3PO": A wonderful interview connected by The Guardian's Ryan Gilbey.

“‘Ah, the prequels,’ says Daniels ruefully. ‘Hmm. I turned one on the other night. Sky seems to have devoted a whole channel to them.’ He leaves no doubt that this is a risible state of affairs. But then he has never been shy of nibbling, if not biting, the hand that feeds him. He gives a shudder when mentioning the Ewoks, the teddy-bear tribe from ‘Return of the Jedi,’ and claims to have been unimpressed by the lurch in the prequels toward fully digital sets. ‘The effects are clever but pointless. The skill is there, but so what? Coldness, that’s the word. Bleakness, even.’ All the signs are that ‘The Force Awakens’ will be different. ‘It became clear early on that with JJ we were getting back to the old-fashioned kind of film-making. We have walls. Actual sets! All right, so you might not have a view out of the window, but you have a window. Now, what else can I tell you?’ He mulls something over, then says: ‘No, I can’t tell you that.’ We are in the office of DK Books, which is publishing an exhaustive new Star Wars encyclopedia to which Daniels has contributed the foreword. An editor is sitting with us to ensure that we don’t stray too far on to the subject of ‘The Force Awakens.’ Daniels is a model of discretion, even when he emails me later to say how Abrams has approached C-3PO’s place in the new movie: ‘While meticulously directing every moment of ‘Episode VII,’ and giving 3PO time and space to do his thing, JJ is far too respectful to suggest that he change the droid’s ways in any way. There was, however, some debate about a certain issue, whose outcome will become apparent in due course …’” 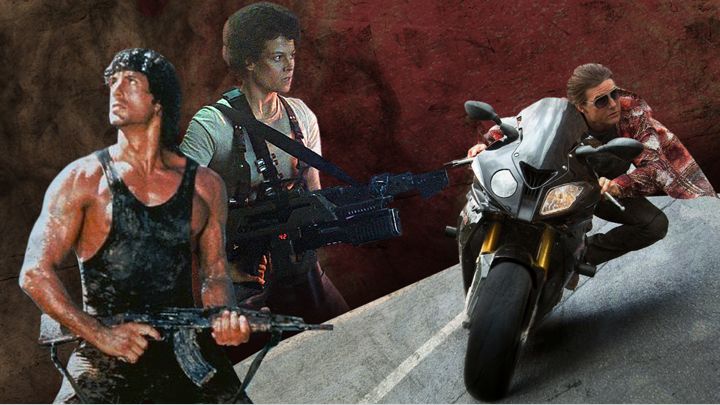 "From Swashbucklers to Supermen: A Brief History of Action-Movie Heroes": An enjoyable, clip-filled piece by Rolling Stone's David Ehrlich.

“The next generation of action hero resulted from a simple question: What if Steve McQueen were an unrepentant a—hole? Their presence was announced by gunshots instead of footsteps, and they punctuated every sentence with a bullet. They were mean sons of bitches who walked with a swagger and broke all the rules just because they could — unsurprisingly, a lot of them were cops (some things never change). Anything to catch the bad guys, right? Clint Eastwood already knew his way around a six-shooter thanks to his star-making years in spaghetti Westerns, but everything changed when they put a .44 Magnum in his hand. Once a taciturn gunslinger who just wanted to ride into the sunset with his piece of the action, ‘Dirty Harry’ saw Eastwood reborn as, well, a sociopath. Harry Callahan didn't just stop the bad guys, he also messed with them for his own sick amusement. He wasn't forced into violence, he was excited by it — for this breed of action hero, the villain was just a good excuse. Tellingly, the movie ends with Callahan tossing his badge into some murky water. But Harry Callahan was practically a boy scout compared to ‘The French Connection’’s Detective Jimmy ‘Popeye’ Doyle (Gene Hackman), the bigoted, womanizing alcoholic who accidentally killed a fellow officer during his film's climactic chase and didn't even stop to say sorry. And then there was the ‘Death Wish’ series, which didn't even bother to give its hero a badge. The iconic Seventies urban-paranoia, Horror City franchise just gave Bronson's everyman an excuse to take justice into his own hands — and thus his action hero went from peaceful architect to one of the most prolific movie mass-murderers of the 20th century.” 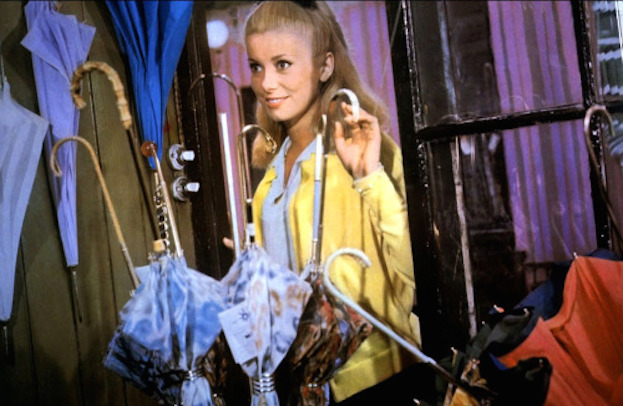 "What Happens to Love in Jacques Démy's 'The Umbrellas of Cherbourg' and 'The Young Girls of Rochefort'": A great essay from Scott Tobias at Oscilloscope.

“‘Our life is a romance, a melody composed by chance.’ So sings one of the carnies who blow through town in Jacques Démy’s ‘The Young Girls of Rochefort,’ putting the director’s thesis statement to music. Played by George Chakiris and Grover Dale, they’re the happiest characters in the film because they’re the only ones who don’t imagine a destiny greater than the next stop on the tour. For them, Rochefort is another town with another gallery of pretty women, and when they’re done cavorting in the streets—and hawking a brand-new Honda motorcycle at the fair—they’re on to new adventures, untroubled by the desire for some greater and more elusive destiny. The people they meet in Rochefort, by contrast, are constantly in search of some ideal love that’s out there somewhere—of that they are convinced and perhaps correct—but it can’t possibly be in this little town, which isn’t big enough to house their dreams. Perhaps it’s in Paris. Perhaps it’s on the other side of the world. Both a part of and apart from his French New Wave brethren, Démy directed deceptively bright confections that carry themselves lightly, but are more troubled under the surface than they might appear. With 1964’s ‘The Umbrellas of Cherbourg’ and 1967’s ‘The Young Girls of Rochefort,’ Démy paid homage to the American movie musicals with much the same vigor as his contemporaries in the movement embraced and reconfigured American genre pictures. What comes through in both films is the purity of emotion that the musical affords: private desires expressed openly and vigorously, the joys of courtship, and love requited, popping off like starbursts in the choreography. The songs express a desire for love, but fate doesn’t guarantee its realization—and beyond that, there’s no certainty that one’s romantic ideal will last forever. Life is complicated. Circumstances intervene.” 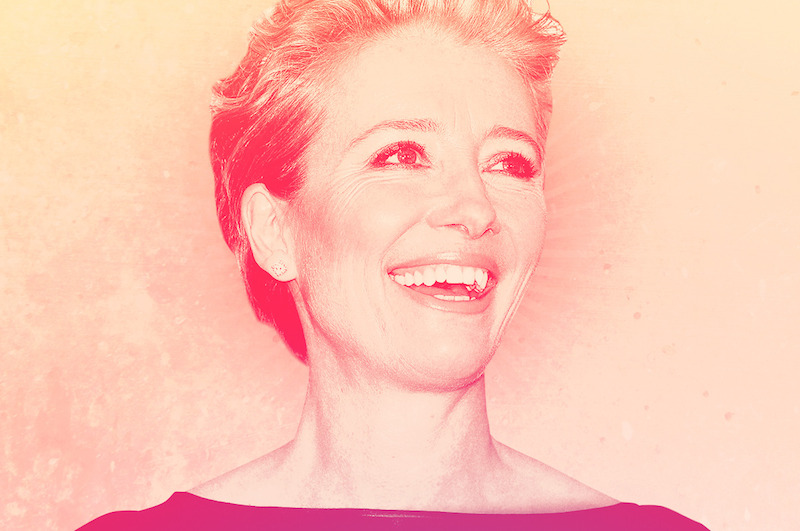 “Even though she’s won an Original Screenplay Oscar, Thompson isn’t immune to having her scripts polished or totally rewritten by others: Last year’s ‘Annie,’ for example, bore little resemblance to the draft Thompson first scripted for producer Will Smith. Still, she’s sanguine about the process. ‘I’m totally used to it,’ she admitted. ‘I’ve had three or four films made on scripts that haven’t been touched by anyone else, but I have rewritten people and been rewritten subsequently. Each time I do that, or when I write something that hasn’t been made, I think, Well, I learned something doing that, so it doesn’t matter. You have to be incredibly philosophical about it.’ Thompson’s not so keen on rewriting, anyway — ‘For me, the first draft is a really glorious ride, and it’s the next 17 that are like pulling teeth’ — though she says the act of writing itself has gotten more pleasurable over the years. ‘There’s a great thing that happens after you’ve spent a morning writing,’ she said, ‘and you think, I haven’t got anything there, not anything, and then you go away and become depressed, and when you come back, you find a good sentence or a good speech buried somewhere in the yards you’ve written. It’s in those hours of writing crap where you find a little thing that’s worth it, that makes you believe in the process of writing.’” 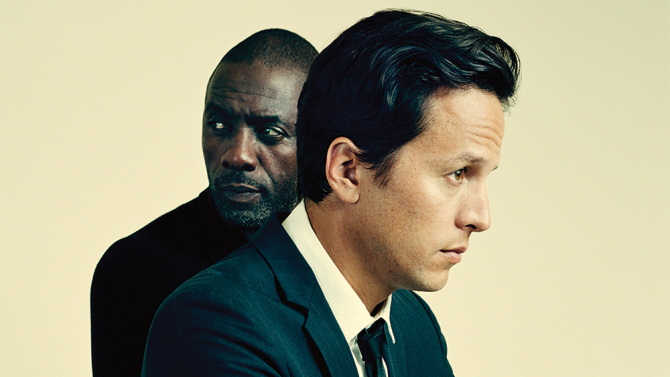 "How Netflix's 'Beasts of No Nation' Could Change the Movie Business": According to Variety's Ramin Setoodeh.

“Despite some resistance, Netflix’s entrance into the movie business will be a game changer. Unlike theatrical distributors, whether Disney or Fox Searchlight, the video-streaming goliath doesn’t need to rely on ticket sales to measure a film’s success. Rather, Netflix makes money through its paid subscriber base, which is 65 million and growing. The Los Gatos, Calif.-based company is moving its Southern California headquarters from Beverly Hills to Hollywood by 2017, doubling its L.A. office space, with plans to occupy 200,000 square feet in the 14-story Icon Building at Sunset Bronson Studios. ‘There’s no theatrical revenue expectation in our business model on any movie,’ says Netflix’s chief content officer Ted Sarandos, who has been on a features buying spree (he’s expected to spend more than $500 million on original content next year). In the months to come, Netflix subscribers won’t have to leave their sofas to watch Adam Sandler’s new Western ‘The Ridiculous Six’ (debuting Dec. 11); martial arts sequel ‘Crouching Tiger, Hidden Dragon: The Green Legend’ (early 2016); ‘Pee-wee’s Big Holiday,’ starring Paul Reubens (March 2016); ‘Jadotville,’ a true-life drama headlined by Jamie Dornan; and the Brad Pitt military parody ‘The War Machine.’ ‘I feel like it’s incumbent on us to make and distribute movies that are so good that theater owners will want to book them,’ says Sarandos, arguing that limited access to first-run movies is bad for business. ‘Every single bit of media in the world has been impacted by the Internet — books, television, music; everything, except for the window of theatrical movies,’ he notes.” 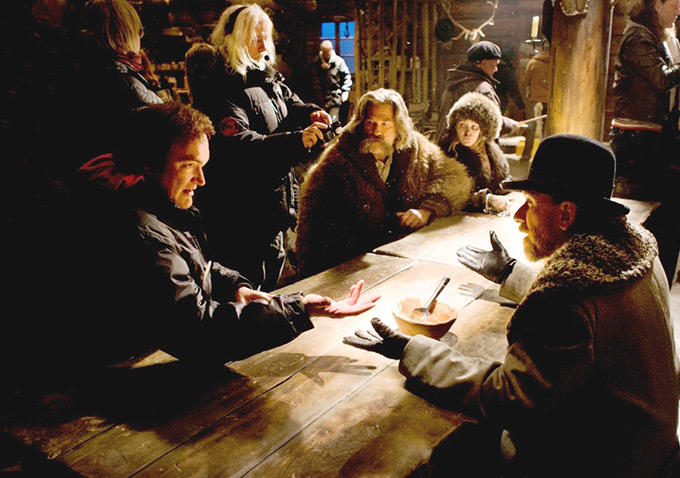 RIP Dean Jones, the beloved actor whose 1970 performance of "Being Alive" in Sondheim's "Company" is one for the ages.