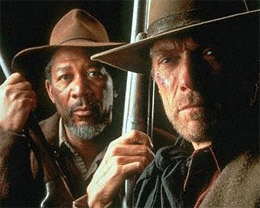 Clint Eastwood is one of the few filmmakers whose work I always attend on his reputation alone. This is not to say they've been classics (think of his orangutan movies) but when entering a theater I can be reasonably confident, worst case scenario, of seeing something above average.

Eastwood has had several defined periods, such as his Spaghetti Westerns of the 1960s and the cop pictures of the 70s and 80s (which arrived a bit late here in Mexico because "Dirty Harry" was censored). In a career that spans five decades and included dozens of features, a single splits it into Pre and Post, and that film is "Unforgiven." It's hard to think of a single feature that puts into perspective a filmmaker's career like this one does for Eastwood, and it opens the door to his current stage which has included some of his best work.

When "Unforgiven" came along in 1992 I can't say I paid it any special attention before its opening. Clint Eastwood had been chewing out one violent film after another for what seemed like an eternity and this one simply seemed like another one of the countless shoot-them-ups that he had done before in his career.

They ranged from the average ("The Gauntlet") to the good ("Dirty Harry") to the classic ("The Good, the Bad and the Ugly"), and it's hard to blame Eastwood for choosing this direction considering he seemed to have been made for cinematic violence; him holding a pistol suited him as well as a tuxedo on James Bond or a magic wand on Harry Potter. 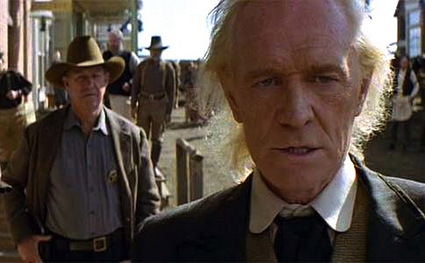 "Unforgiven" is the story of a terrible conflict between what seem to be the two main population groups in the town of Big Whisky --the lawmen and the hookers. It is set in motion by the maiming of one of the latter and the inability by sheriff's Little Bill (Gene Hackman) to bring justice to those responsible. A reward is set with word spreading far and wide, bringing the interested parties in a collision course with the legendary lawman. Among them is the flashy English Bob (Richard Harris) and another legend of a very different kind (Will Munny) a man of violence who swore off it long ago but finds himself going back to it because of the terrible circumstances his family is going through. He is accompanied by a youngster (Jaimz Woolvett as The Schoffield Kid) who sees violence as no big deal and his old side-kick Ned (Morgan Freeman), who knows much, much better.

"Unforgiven" didn't turn out more more of those earlier Eastwood films. In many ways it feels autobiographical. I'm not sure if David Peoples wrote the script with this in mind but in this movie you can sense that Eastwood paused for a moment to ponder what the violence in his previous films had meant.

If you were to remove this concept from the picture you could make a case, as was done in the Siskel & Ebert show, that the character of English Bob (played by Richard Harris) is superfluous to the story of the avenging prostitutes. However, it seems to me like Eastwood made the concept of cinematic violence the central theme of "Unforgiven" and tried to elaborate on this point by providing us with several points of view about the subject through the film's four main characters.

Among them, the figure of English Bob may just be the one closest to the old Eastwood persona, not that Clint ever aimed precisely at exuding Harris' charm but this character does represent violence, first and foremost, as something appealing, even glamorous: he's rather good at it, lives for it and wants to be remembered for it once he's gone. If a little fiction helps in adding flavor to his legend, all the better.

Morgan Freeman's Ned simply sees violence as a fact of life. He's not bad at it but apparently, it didn't permeate enough that he can go back to it indiscriminately, as he once thought. The character's obvious reason for existing is to provide the audience with the friend and confidant required to recall those amazing old stories of Will Munny in action.

Gene Hackman's, Little Bill seemingly has grown perfectly used to violence; what's more, he's better at it than anybody else around and being aware of this, he has no qualms about dispensing it. Eastwood's Munny is a man of "notoriously vicious and intemperate disposition" whose only constant when involved with violence is the fact he always ends up on top. He doesn't have the deep comprehension about it that Little Bill does but he is self-aware enough to realize the "hell-of-a-thing that is killing a man"; then again, shooting drunk or sober, no matter how pressured-filled the moment, the bottom line is he's "always been lucky when it comes to killing folks." 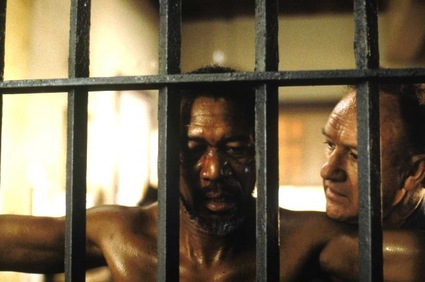 Hackman's character is especially difficult to describe, the first contradiction being how a savage man like him could get a name like "Little Bill." Why doesn't he resent it is an obvious sign of his confidence. A violent monster on the surface, Bill doesn't particularly enjoy violence but understands it as an absolute necessity in the old west. The genius of this character was providing him with plenty of eccentricities that managed to turn a brute like this into a most endearing character, be it his love for telling these fascinating tales of violence, his hapless roofing capabilities or the indignant expression on his face when his newly acquired biographer, drenched in water from Bill's leaking roof, proposes "shooting the carpenter." With four leads as memorable as those in "Unforgiven" it would be a stretch to say any one of them stole the film but if there is one of them who comes the closest, that would surely be Hackman's Little Bill.

There's so much philosophizing about violence in "Unforgiven" that during my first viewing it crept up on me that Eastwood might very well try to end the film with some sort of philosophical debate about it between the two main characters, but unlike Scorsese in the "The Color of Money," Eastwood (thankfully) never loses sight of exactly what kind of movie he is making. If the audience is to fully appreciate what exactly the Munny character was like in his old life, we have to watch him in action and the final scene where he avenges Ned, in a shower of flying bullets, turns out to be the perfect setting. 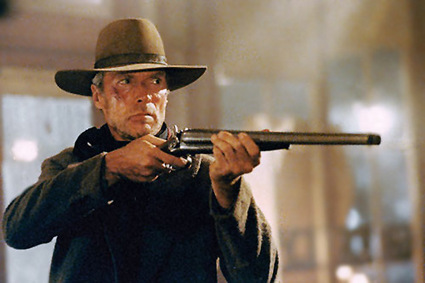 Even in such a terrifying scenario we notice Little Bill's biographer (the single, frightened character most of us in the audience can easily identify with) taking the whole event as a graduation of sorts--as terrorized as he is, he can't help but be inquisitive about the peculiar greatness of what he has just witnessed.

Lennie Niewhaus' rather simple tune manages to provide "Unforgiven" with something that I can only describe as a soul and, judging from later Eastwood films, it seems to have given Clint with a template on which he has based most of his later, self-written scores. A bit repetitive as they all might be, they all share one thing in common, they stay with the audience long after leaving the theater and, what's most important, they help provide the same effect for their movies.

After decades of shoot-ups in which every Clint Eastwood lead had no problem intuitively identifying exactly those villains that needed to be rid of, a film like this comes along in which we see two characters becoming his targets, one of them guilty as can be, the other barely so, but like Will Munny says: "deserving had nothing to do with it." Add the moral repercussions here to the terrible circumstances that force Munny into a life he swore never to come back to and the movie feels like much more than just the usual target practice of Clint's prior works.

In his later, post- "Unforgiven" era, Eastwood has made few films with violence as the central subject but it's impossible to imagine gems such as "Million Dollar Baby," "Gran Torino" and the recent "Hereafter" without him having taken that next step at some point of his career. He could have easily kept on going and I doubt many people would have questioned him for remaining on a course that had worked so well for him for so many years but then again, who can blame him for changing directions? With "Unforgiven", Clint Eastwood seems to have said all there was for him to ever say about movie violence.