Film Critics Honor the Best of 2014

Members of the Broadcast Film Critics Association (BFCA) bestowed their honors in film during the 20th Annual Critics’ Choice Movie Awards (CCMA). These honors coincided with the revealing of the coveted Academy Awards nominations (January 15)—which can be either a feather in your cap or a hard pill to swallow. In the latter case, three films were vindicated: “Life Itself” won Best Documentary Feature while “The LEGO Movie” won Best Animated Feature and “Force Majeure” won Best Foreign Language Film, all of which are shockingly absent in the Oscar race. At the end of the day—or night, in this case—filmmakers can walk away knowing that their CCMA award was garnered by people (critics) who spend countless hours in dark theaters analyzing film by peeling back the layers, down to the minutest of details that general audiences may have missed.

It was a star-studded night, as they say, at the Hollywood Palladium in Los Angeles, complete with iconic tall beam lights that shined up into a clear night sky. Stars arrived on the Red Carpet, posed for photos, gave sound bites to reporters, and were whisked inside to their respective tables all to applaud on cue as the show aired live on A&E, hosted by the energetic Michael Strahan.

Strahan opened the show with a bang as tuxedo-clad “Magic Mike” dancers, who at the end of the number were wearing only their spandex shorts, surrounded him. Strahan followed suit, mentioning his up-coming appearance in the sequel to “Magic Mike” while taking off only his trousers followed by a joke about his legs. He displayed a large, charismatic stage presence and comfortably moved amongst the tables in the audience during various points in the show. 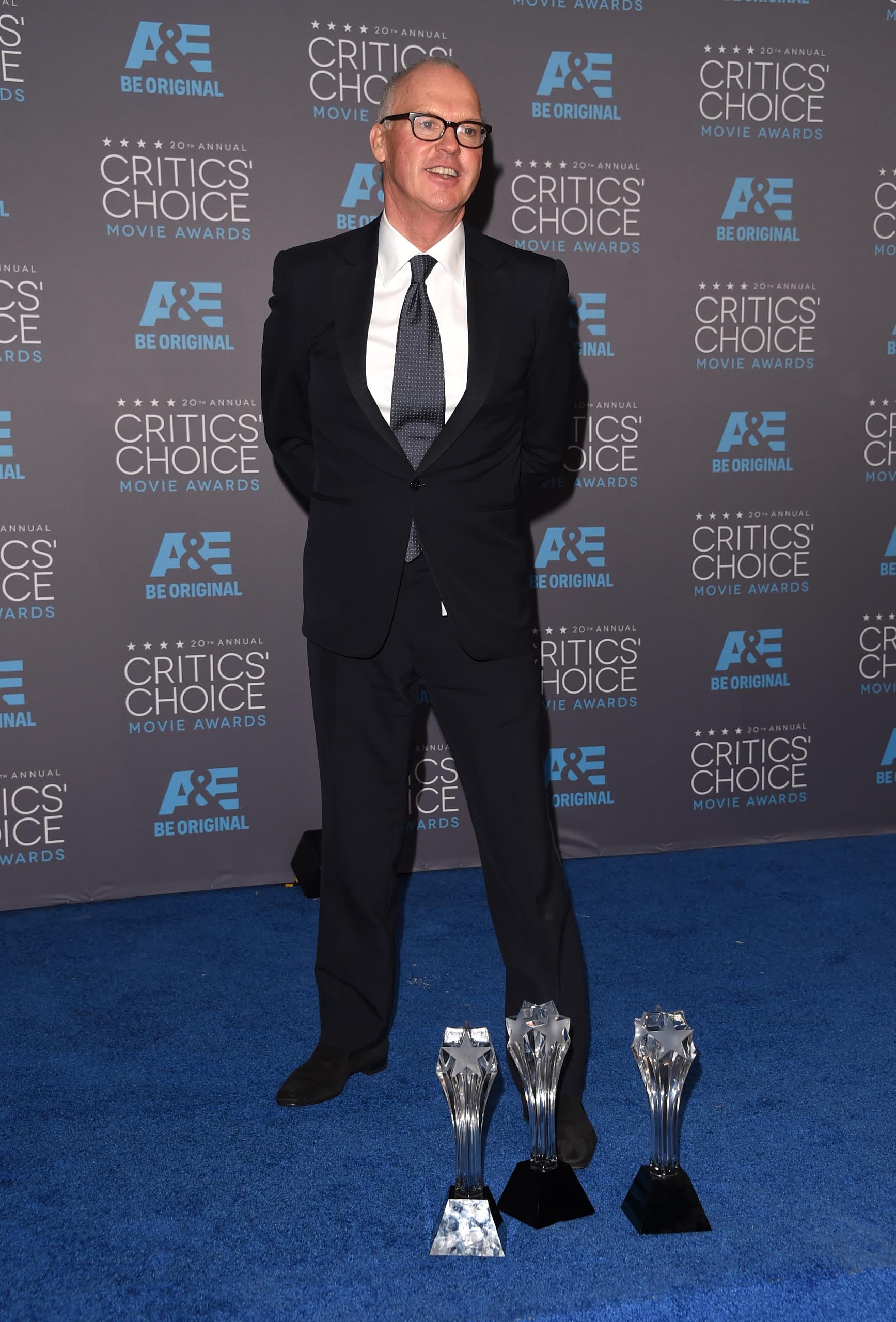 Michael Keaton is the first person in the twenty-year history of the Critics’ Choice Movie Awards to win three awards in a single year (Best Actor, Best Actor in a Comedy, and as part of the “Birdman” Best Ensemble). Yes, he was busy jaunting to and from the stage and, at one point, he tripped on a step and fell approximately four feet off the stage. Ethan Hawke came to his rescue, at which time he regained this balance and seemed to be walking fine.

Keaton was as humble as in his memorable Golden Globe acceptance speech this past Sunday, stating from the podium, "I just wanna thank anybody who's ever thrown me a solid.”

“Boyhood” was named Best Picture and was presented by Sir Ben Kingsley, who, by the way, sat next to me at my assigned table. The film had three additional wins, including Best Supporting Actress for Patricia Arquette, Best Young Actor/Actress for Ellar Coltrane, and Best Director for Richard Linklater.

Linklater was grinning ear to ear as he accepted. He reminisced about his personal “boyhood.” He grew up shuffled back and forth between households, having the stigma of “child of divorce” along with being a product of “a failed marriage, a broken home.” Clearly, his view of his childhood changed. He said, “Especially as I got older, I realized, you know, no one was broken. No one failed. This happens to so many people, you know. It's just life. All of these little imperfections that we carry around with us, that is really just the essence of life itself. Life doesn’t give you perfect, but it does give us all an opportunity to care about one another and be supportive.” 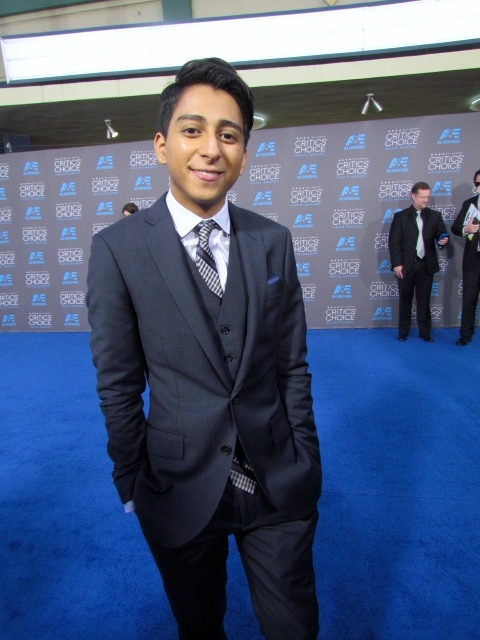 On the Red Carpet, we talked with “the lobby boy,” Tony Revolori, who stated upon being asked about his famous penciled-on mustache, “Wes Anderson would not allow the make-up people to put it on me. I had to do it myself every day. Every single scene you see me applying the mustache is mine.”

He further stated that working with Wes Anderson was, “Nothing but spectacular; he’s an amazing genius who’s twenty steps ahead of you. I learned so much from him.”

Julianne Moore, seated a table away, won for Best Actress for “Still Alice.” She looked stunning while walking to the podium, giving a heartfelt speech centering on her role as a woman with Early Onset Alzheimer’s disease.

"Thank you very much to the Broadcast Critics for this award. Thank you for noticing a little movie and thank you for honoring me among these really wonderful women. One thing I know about myself for sure is that I'm a girl's girl. I love talking to women, hanging out with women, acting with women. One of the things about being an actress, the hardest part is that you never get to act with other women — or very rarely, anyway.

“I'd like to thank all the women who I spoke to who are living with Alzheimer's disease. They are truly, truly amazing. I want to thank them for their time and their generosity, and sharing their experience. I really hope I did you justice. And I want to give a special shout out to my friend Sandy Oltz [50 years of age], my redheaded sister who has been living with Alzheimer's for the last three years. Thank you very, very much for this."

J.K. Simmons won for Best Supporting Actor for “Whiplash,” Bradley Cooper for Best Actor in an Action Movie for “American Sniper.” Both were not present.

“Interstellar” won for Best Sci-Fi/Horror Movie and Best Visual Effects went to “Dawn of the Planet of the Apes.” 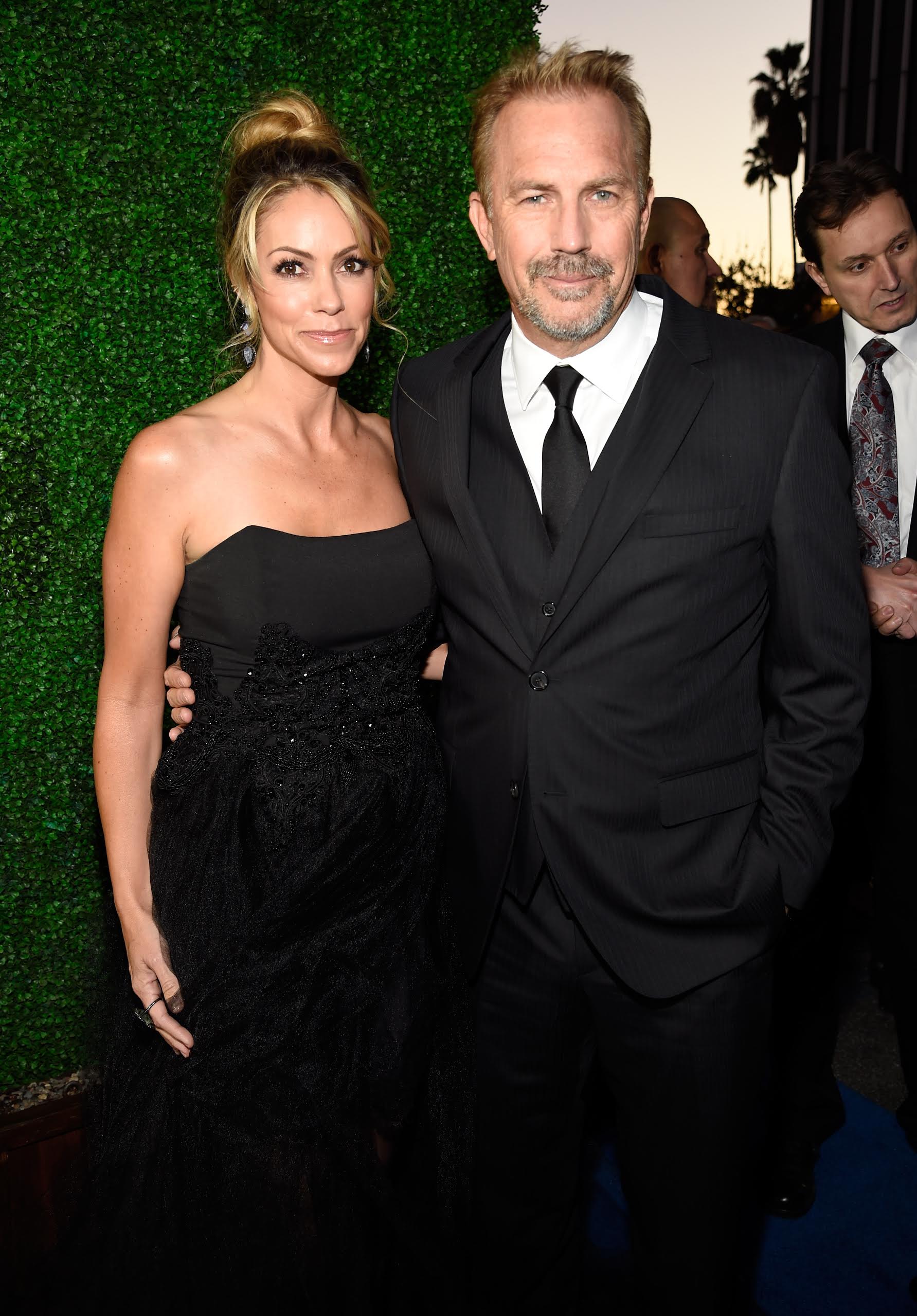 As Costner took the stage, he was given a standing ovation. He began his grateful speech stating, “I stand here and can’t help but think there’s been some kind of mistake, like this isn’t for me, like I’m really accepting this for Sean Connery or Gene Hackman because they couldn’t be here themselves.

“I don’t know about you, but I miss them. The weight that Sean and Gene gave to our business, the way they carried the title ‘leading man.’ So, however this happened, however my name found its way, stumbled onto the list of actors of a certain age that happen to be in town, I’m humbled and honored by your selection tonight.”

Those comments received applause from the crowd as he touched on how actors do choose an end date to their careers. He continued by saying that it was his dream to act, thanking the writers first and then the directors. He then mentioned his drivers, craft service, his assistants, film crews, and fellow actors. Costner finished by thanking his parents, wife, and his children, whom he stated, “Are bigger than the movies.”

Ron Howard and Jessica Chastain also received special honors at the ceremony. Chris Hemsworth presented the “Critics' Choice LOUIS XIII Genius Award,” established to honor an icon who has demonstrated unprecedented excellence in the cinematic arts, to multiple award-winning director, producer, and actor Ron Howard. Chris Pratt presented the inaugural “Critics’ Choice MVP Award,” to Jessica Chastain, recognizing an extraordinary actress for her work in several standout movies throughout a single year – “Interstellar,” “Miss Julie,” “A Most Violent Year (which also earned her a Best Supporting Actress nomination this year),” and “The Disappearance of Eleanor Rigby.”

Chaz Ebert said, “I can tell you, talking about this movie and talking about the takeaways, which are ... you know, talking about love, just ... it enlarges your heart. It really enlarges your purpose on this Earth. It helps give you more empathy and compassion for other people. And those are the principles that Roger stood for. And that's why he, when he said, "Cinema at its most noble will do those things. To be able to talk about the film and talk about Roger, it does a lot for me.”

Steve James commented, “Well, I hope they take a lot of different things away from this film. Roger, I think, looked at his life like a movie, but in the most deepest way. Sometimes, it was a grand adventure. It was often a love story, especially in the later years. Sometimes, it had tragedy to it, but yet, he and Chaz, they kind of got through it. They soldiered on, so to speak, as Herzog would say. So I think his life is a great sort of model for how to live your life, really.” 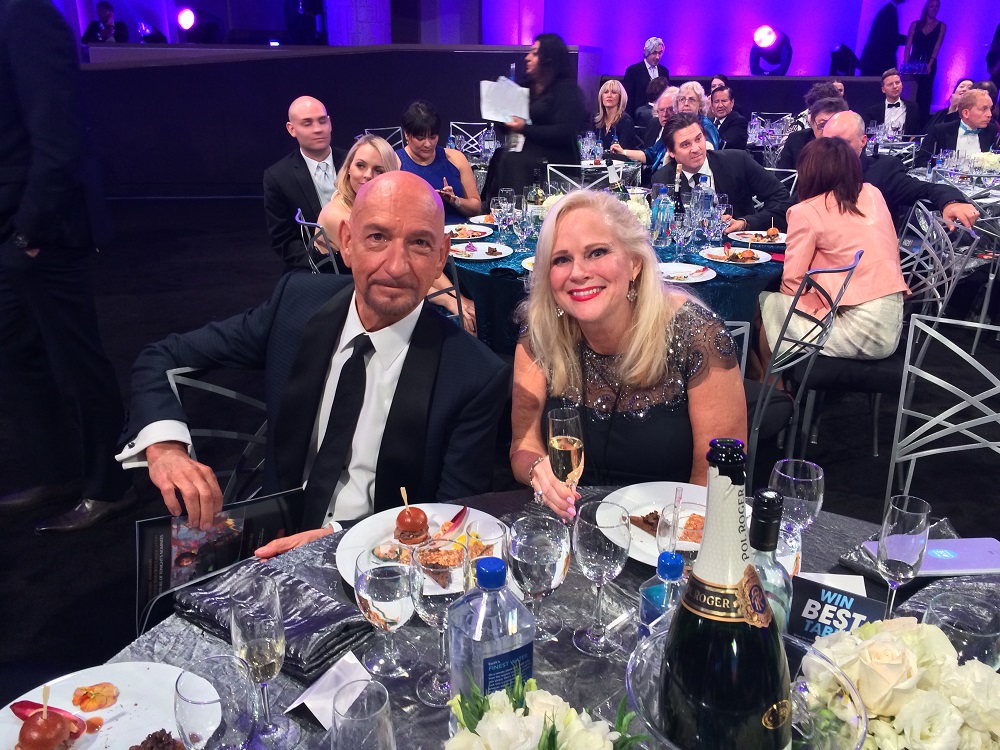 Highlights of attending the awards show were the interactions between the stars and the critics during the commercial breaks. Table-hopping, chatting, and photo taking were all accepted and the norm. Sitting beside Sir Ben Kingsley was incredible in and of itself. He was charming and toasted with my husband and me after he was poured a glass of champagne. When speaking about his colossal amount of film roles, he told us, “They are like my children, I have no favorites, and who knows what’s to come ahead…that may be my favorite.” No need to do too much table-hopping when you’re sitting with a legend. Jessica Chastain, however, was someone I wanted to meet. She is very beautiful in person; we spoke about her work with Liv Ullmann and the film “Miss Julie.” Chastain had nothing but praise for Ullmann, noting her good fortune to be directed by such a talented woman.

The lavish after-party was held a few blocks away at the Hollywood Athletic Club, which few stars attended, although twelve-year-old Jaeden Lieberher, who stars alongside Bill Murray in "St. Vincent," chatted about how “Bill” always cracked jokes on set every day and that he was constantly laughing, which was not the case with his movie mom, Melissa McCarthy. She was much more serious. As in the film, he’s very comfortable with adults.

Best Visual Effects – “Dawn of the Planet of the Apes”