The Quick And The Dead

“The Quick and the Dead" takes the premise of those old Tough Man Contests and moves it to the old West, where the sadistic despot of a small town holds a shoot-off every year. The rules are simple: The last man alive wins a big cash prize. It's a movie that is intimately familiar with the conventions of Westerns, especially those rules that state: (a) when a Kid comes riding into town for a showdown with the big man, he is probably the man's unacknowledged son, and (b) when a woman rides into town, also for a showdown, she is probably seeking revenge for a terrible wrong in the past.

The movie stars Gene Hackman as a man named Herod, who lives in a dark, Dickensian house that looms at the end of Main Street.

Protected by henchmen in long black leather coats, he collects a 50 percent tax on all business in the town, shoots anyone who gets out of line and holds his bloody competition once a year.

In this contest, anyone can enter. The contestants are paired off, and at the stroke of 12 on the town clock, they stand in the middle of the street and shoot at each other. One must die in order for the other to win. Then it's on to the next round (in this town it's "High Noon" over and over again). The last man standing collects the prize money.

Herod is always the last man standing. I figured that out because he's still alive. His motives for holding this contest may seem obscure, but actually they are pretty clear; he holds it because it provides a simplistic story structure for the movie, giving it a long series of duels on Main Street as a substitute for any form of genuine dramatic conflict.

You'd think contestants would have to be pretty hard up to enter a contest where the odds are about 10-to-1 in favor of their being killed. But there's no shortage of entrants, including one guy who adds an ace to his deck every time he kills someone, and another who cuts a scar into his arm after every kill. Also arriving are two strangers: the Kid (Leonardo DiCaprio) and Ellen (Sharon Stone). The Kid is cocky and self-confident: "Damn, I'm fast!" he says after polishing off one opponent, and later he asks idly, "Is it possible to improve on perfection?" Ellen is a little harder to read. She is a lone rider who puffs on a thin black cigar and makes a bartender regret it when he assumes she's a hooker. She's sexy in leather pants and a trim outfit (and later manages to find a ballroom gown in her saddlebags). She wants to enter the contest. Hackman, who is attracted to her, doesn't want either Ellen or the Kid to shoot it out, possibly because he suspects that the Kid is his own son.

Oh, he denies it. But the Kid is adamant. "I'm his son," he declares, "and if this is the only way he's gonna admit that, so be it." In other words (I think), the theory is that if the Kid kills Hackman, by golly, that'll make him admit it.

The movie's story, as you have grasped, isn't much. But "The Quick and the Dead" is not without its good points. The director is Sam Raimi (the "Evil Dead" movies, "Darkman") and he displays once again his zest for stylistic invention. Early in the movie, a character gets shot through the hat brim, and the sun shines through the hole into the camera lens. A nice touch, but Raimi tops it later in the film by showing the sun shining through a bullet hole clean through a guy's body, and by a third shot in which we look down Main Street through a large hole in a man's head.

The cinematographer, Dante Spinotti ("The Last of the Mohicans") makes the material look terrific. The lowering skies around the isolated town make it look ripe for vengeance of biblical proportions, and there are quiet satirical touches, as when a man stands in a saloon door and his shadow seems about 6 miles long. It also helps the visuals that it rains all the time in this town (although when it doesn't, nothing is green).

It must also be said that Hackman somehow survives the material.

I am beginning to believe he is an actor who can say anything and make it work. As preposterous as the plot was, there was never a line of Hackman dialogue that didn't sound as if he believed it. The same can't be said, alas, for Sharon Stone, who apparently believed that if she played her character as silent, still, impassive and mysterious, we would find that interesting. More swagger might have helped. Do you suppose she took the plot seriously? 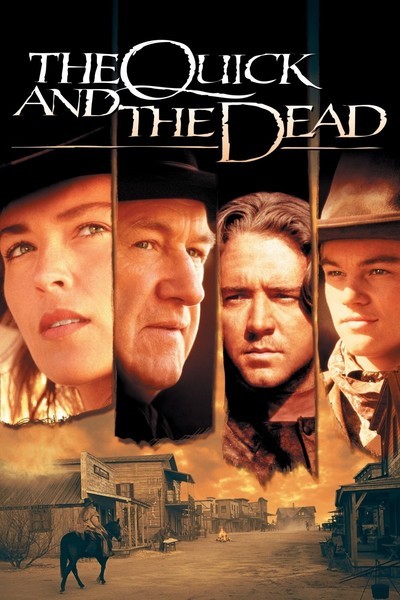