Sheila O'Malley January 02, 2015
Tweet
"Casting is destiny in so far as the character goes, and character is plot." - Warren Beatty on casting "Reds."
The moment lasts two seconds and consists of only two words: "Welcome home." Two seconds and two words is all an actor like Edward Herrmann needs to get the job done.
Herrmann, who died Wednesday in Manhattan at 71, played many roles during his long career, but you can see the totality of his skill reflected in this one moment from one memorable film, Warren Beatty's Reds" (1981). The actor portrays Max Eastman. It is a small role, but crucial in helping Warren Beatty set up the world shown in the first half of the film, the jostling, free-loving Greenwich Village/Provincetown crowd, politically radical, driven, argumentative, walking the walk. Eastman was an important member of the clique surrounding John Reed (Warren Beatty) and Louise Bryant (Diane Keaton).
Advertisement
In one early scene, Emma Goldman (Maureen Stapleton) holds court at a little tavern, arguing with Reed and Eastman about Woodrow Wilson, America's neutrality, all as Louise Bryant sits quietly, listening. At one point, Louise manages to get in a comment, contradicting Emma, and Emma shoots her down contemptuously, letting her know in no uncertain terms that she doesn't think Louise has anything to contribute. Watch Edward Herrmann across the table. He keeps his eyes on Diane Keaton during the entire exchange, and as Emma continues bulldozing over Louise, he smiles gently. A supportive smile, an "I heard what you said" smile, with a gentle, humorous hint of, "Yup, Emma's going on and on again, but I heard you." The smile provides texture, depth, without a word said. It is through such details that not only a character emerges, but a world. 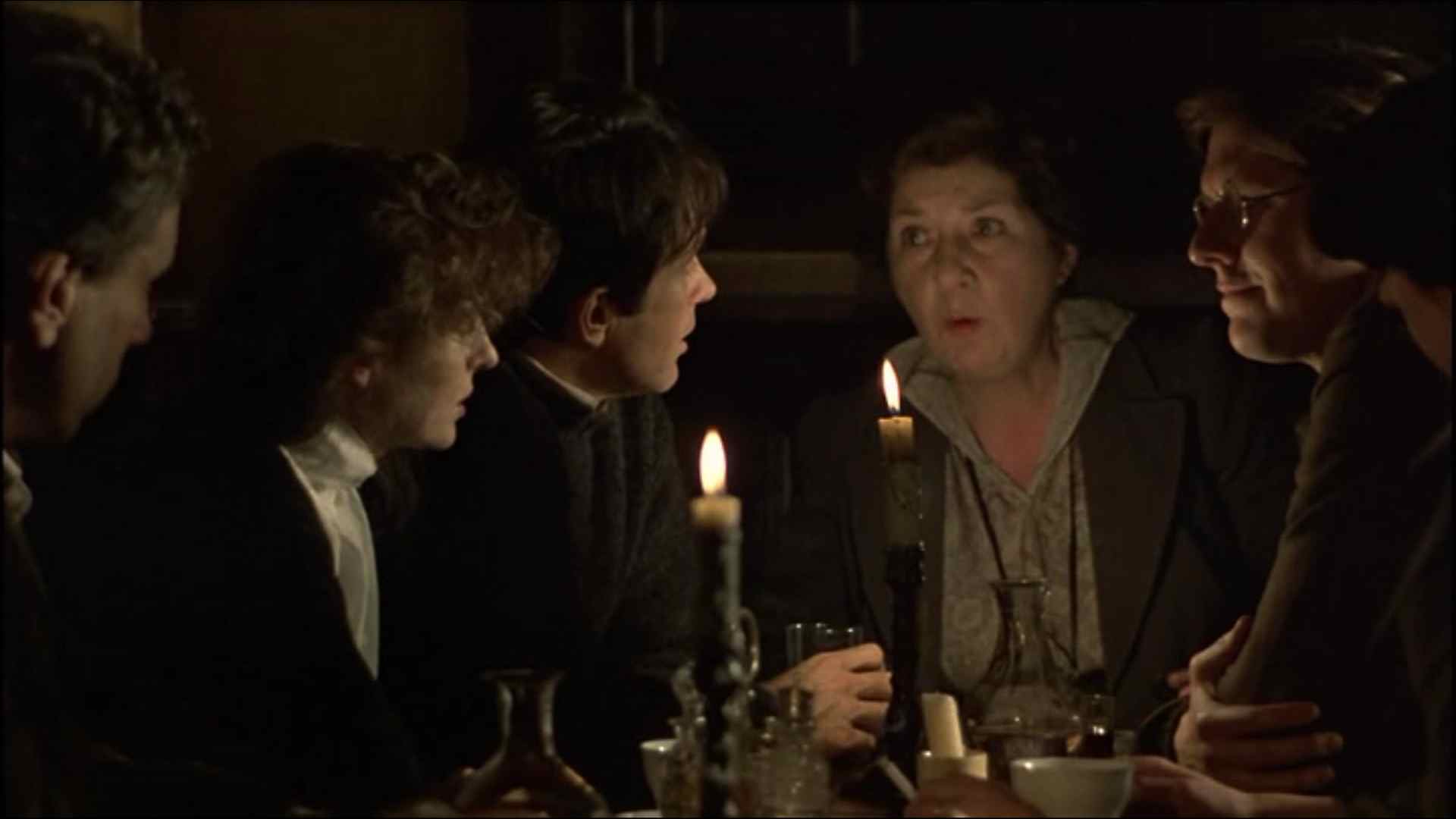 Herrmann has many such moments in the film, but the most important, in terms of the larger themes and complicated plot Beatty needed to make clear, comes in the scene when Max Eastman goes to greet John Reed on Reed's return to America after being in Russia reporting on the Revolution.
Reed emerges from customs, at the boat-dock, harried and furious. "They" went through his things and took all of the notes for his book. Reed is frustrated, enraged, helpless. "They took my notes - they can't do that, can they?" he demands of Max Eastman, standing there waiting for him, bundled up against the cold.
Eastman does not answer Reed's question. He just says quietly, with a sad sense of knowingness, "Welcome home."
As Beatty said, character is plot. Edward Herrmann's line-reading of "Welcome home" in "Reds" goes beyond the emotional or the personal: it is the plot.
Character actors, on the margins of the main story, playing support staff, are often given these moments that need to handle or speak the larger themes, the broader context. Through their witnessing, we understand how to look upon the leads, we understand the stakes in a way the leads cannot. If Herrmann had not had that chastened, sadly knowing aspect to his demeanor when he says "Welcome home", we wouldn't have understood all that had happened during the time John Reed was out of the United States. Herrmann's "Welcome home" acts as a counter-weight to Beatty's fury and openness, his vulnerability and outraged idealism. Herrmann's line-reading shows a sad self-awareness that a shared dream is in the process of dying.
Advertisement
This is why Warren Beatty, when casting "Reds," went after heavy-hitters like Maureen Stapleton, Gene Hackman, Jack Nicholson, Paul Sorvino, and Herrmann to represent  all of the issues swirling around the two compelling romantic leads. Beatty had spoken about how he didn't want the film to be about two romantic idealists riding off into the sunset. He wanted to make a film about that group of people, about the development of the American Left, of all of the characters and their reactions to the seismic events of WWI and the Russian Revolution. Heady intellectual stuff, but made palpable, visceral, grasp-able, and, above all else, emotional, in the hands of someone like Herrmann.
In the special features to the anniversary DVD release of "Reds," Herrmann observed: "Warren understands life in a very personal way. I have a feeling that he thinks the intellectual side of life is a result of the organic biological side of life and that the huge complex intellectual constructions that we have, these passionate debates about the dialectics of Socialism is mostly about who's the biggest guy on the block, who's the one who's sexy, who's the one who's got the juice. And that the intellectual arguments are more emotional than intellectuals like to think. And that's the way he approached it, which I thought was absolutely great."
His comment is an example of how character actors (even more so than the lead actors, in many cases) need to align themselves with a director's vision, in order to bring out that larger world in which the stars must operate. If you don't have a Max Eastman who approaches his intellectual arguments as "emotional," then you don't have "Reds." It's that simple. Movie stars do not act in a vacuum. As wonderful as Beatty and Keaton are, they rely on these secondary and tertiary characters to create the world of the film.
Advertisement
Beatty also helped himself, famously, by his use of the "witnesses," real-life people from that time period, like Henry Miller and Rebecca West, who commented on the events and the people as they remembered them. There are widely varying interpretations in each witness account, which dovetailed beautifully with Beatty's sense that the truth changes, depending on where you stand, especially when spoken across a vast gulf of years. The "witnesses" spoke of America's entry into WWI, they spoke of the effect the breakout of the Russian Revolution had on their respective circles (conservative, liberal, radical), they filled in the blanks for us, they provided exposition. John Reed and Louise Bryant witness the Russian Revolution, marching, protesting, writing, witnessing the looting of the Winter Palace, making love to the sweeping strains of the "Internationale." They are in the bubble of the event, America far far away.
But back home, things were getting ugly. People, friends, were deported.  There were crackdowns, censorship, hysteria, Senate hearings, paranoia. The glory days were over. The hope of another kind of political future that had buoyed up the first half of the film began to shatter. We understand that from the witnesses. But we also get it, loud and clear, from Herrmann's expression and tone when he says "Welcome home." 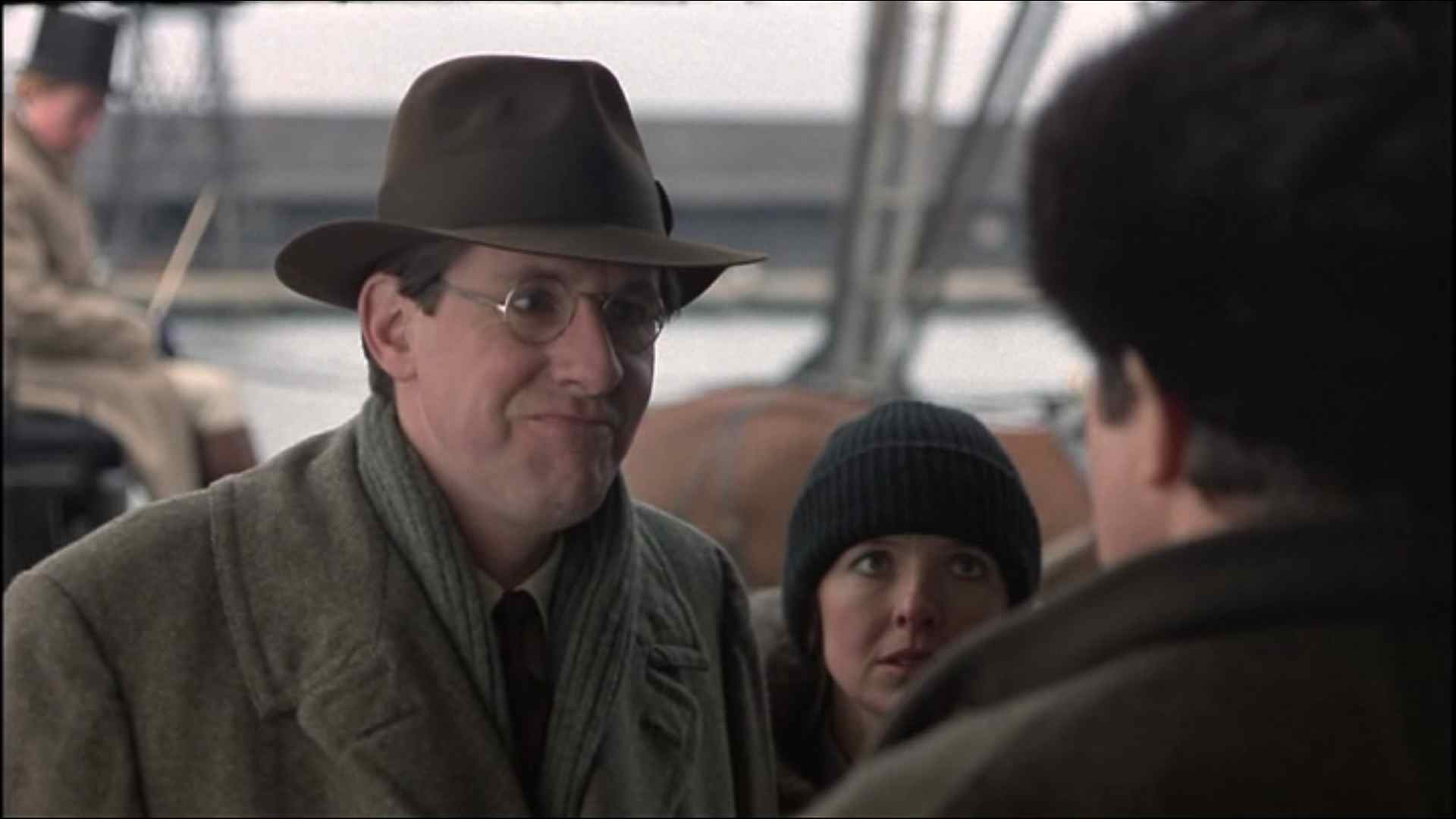 In that line reading we see multiple things: we see Max Eastman's entire experience while John Reed was away (and, by extension, the experience of the rest of the community). We also see that a sad resignation has come over Max Eastman, an acceptance of the harsh reality of the present moment. John Reed is still capable of being outraged, blustering at his friend, "Can they do that?" Eastman has been chastened, crushed a little bit. Eastman knows Reed will have to go through the rude awakening that he himself has gone through. So he has sympathy for Reed in the line reading too, the sympathy of the man who has understood a terrible truth and waits, patiently, for his friend to get it.

Edward Hermann was a character actor who constantly worked, not at all a surprise considering his brief comments above about Beatty's direction and how he understood it, and how it helped him know how to play his role. There was an intelligence and a total lack of ego in Herrmann's approach.

While many were referencing his recurring role in "Gilmore Girls" when they heard of Herrmann's death, the first thing I thought of when I heard of his death was the sad and knowing expression on his face in "Reds" as he watched his friend thrash angrily towards him. The expression on his face came from an acceptance of rancorous ugliness, and mourning that his friend's idealism is about to be shattered, just as his has been. Edward Hermann was able to deliver a simple line like "Welcome home" and somehow put the entire history of the Socialist Left in America into it. That's a character actor.