“I'm not gonna say any more than I have to, if that," a Miami loan shark named Chili Palmer says, early in "Get Shorty." The perfect note in this sentence is the addition of if that. It comes with our knowledge that everyone in the movie will say more than they have to, because "Get Shorty" is based on a novel by Elmore Leonard, that grandmaster of low-life dialogue.

Chili (John Travolta) is a man who knows his way around organized crime but dreams of the movies. In the course of "Get Shorty's" intricate plot, he follows a mob assignment from Miami to Brooklyn to Las Vegas to Los Angeles, where he finds himself sitting in the middle of the night in the living room of a sleaze merchant who produces movies with titles like "The Slime People." For Chili, who knows the man's work, it is like being in heaven.

The producer is Harry Zimm (Gene Hackman, with an overbite).

He has always moved hopefully on the fringes of the Hollywood big time, making a living but never making a hit. Chili has broken into his house to intimidate him into paying a gambling debt. But Chili originally came out west on the tail of a Miami dry-cleaner named Leo Devoe (David Paymer), who collected a $300,000 insurance payout when a plane crashed and everyone thought he was on it. Devoe owes the money to "Bones" Barboni (Dennis Farina), a Mafia boss. And Chili, sitting in Harry Zimm's den in the middle of the night, ends up pitching this story to the producer because he thinks it would make a good movie.

One of the pleasures of "Get Shorty" is watching the way the plot moves effortlessly from crime to the movies - not a long distance, since both industries are based on fear, greed, creativity and intimidation. Elmore Leonard's characters may exist in the crevices of society, but they are smart and verbal, and don't take forever to get to the point. There are a lot of scenes in the movie where people come into the room wanting one thing and leave wanting another. They are persuaded to change their minds by the seductive lure of Hollywood. Even Barboni (one of Farina's best performances, with a broken nose that grows more painful to look at every time we see it) is not immune to the glitter.

Of course, this is low-grade glitter. We meet a gallery of characters, all played in a laconic key as Hollywood types for whom all sentiments are cynical. Harry Zimm, for example, is found in bed with Karen Flores (Rene Russo), a "scream queen" who is the kind of actress who becomes a cover girl for Fangoria. She used to be married to Martin Weir (Danny DeVito), a major, if short, movie star. They all scheme to get "Shorty" into their picture, and the movie's single best scene is one where Travolta gives DeVito acting lessons in how to look filled with menace.

Many characters seem lifted from the autobiography of Ed Wood: Bo Catlett (Delroy Lindo), who owns a limousine service and is owed big money by Zimm; Bear (James Gandolfini), a stunt man who thinks he is very tough but has never met anyone like Chili Palmer before, and Doris (Bette Midler in an uncredited cameo), whose success is based on being as close to a 1930s sex siren as anyone is likely to get in this lifetime.

One of the tactile pleasures of "Get Shorty" is the dialogue. John Travolta has said in interviews that he insisted the original Leonard dialogue be put back into the screenplay, which had been translated into flat, functional Hollywood Speak. In Time magazine this week, he provides an example: In the novel, when Chili's beloved jacket is taken from a check room, he says, "You see a black leather jacket, fingertip length, has lapels like a suitcoat? You don't, you owe me three seventy-nine. You get the coat back or you give me the three seventy-nine my wife paid for it at Alexander's." In the screenplay, he says, this speech had been changed to, "Where's my coat? You better find it. It cost $400." Travolta was right to see that the soul of the story is in the way the characters speak. What is amazing is that anyone would buy an Elmore Leonard novel and want to change the dialogue. The language is the whole point. In "Get Shorty," it sings in counterpoint to the plotting, which is so complex it gets funny, especially after $300,000 is put into a locker at the airport and everyone wants it, but the FBI has it staked out.

"Get Shorty" was directed by Barry Sonnenfeld, a former cinematographer ("Miller's Crossing," "Misery") who directed the two Addams Family movies. He has made a small jewel: a film that demonstrates, to our amazement, that even the Hollywood characters in "The Player" were not quite at the bottom of the barrel. 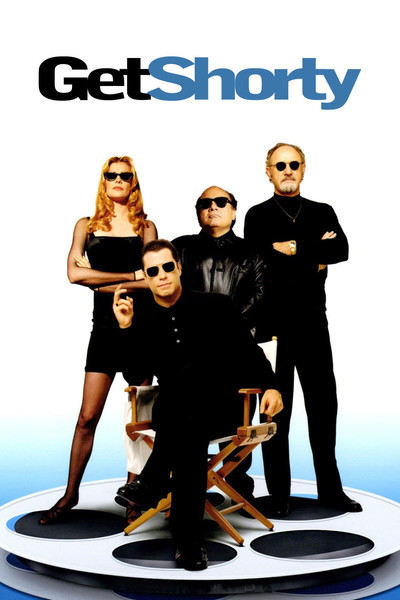 Rated R For Language, Some Sexual Situations and Comedic Violence