"That's Not Funny!": The Atlantic's Caitlin Flanagan reports on the censorship of stand-up comics on college campuses.

“For the comics, the college circuit offers a lucrative alternative to Chuckle Hut gigs out on the pitiless road, spots that pay a couple hundred bucks and a free night in whatever squat the club owner uses to warehouse out-of-town talent. College gigs pay easily a grand a night—often much more—and they can come in a firecracker string, with relatively short drives between schools, each hour-long performance paid for (without a moment’s ugliness or hesitation) by a friendly student-activities kid holding out a check and hoping for a selfie. For all these reasons, thousands of comics dream of being invited to the convention. The colleges represented were—to use a word that their emissaries regard as numinous—diverse: huge research universities, tiny liberal-arts colleges, Catholic schools, land-grant institutions. But the students’ taste in entertainment was uniform. They liked their slam poets to deliver the goods in tones of the highest seriousness and on subjects of lunar bleakness; they favored musicians who could turn out covers with cheerful precision; and they wanted comedy that was 100 percent risk-free, comedy that could not trigger or upset or mildly trouble a single student. They wanted comedy so thoroughly scrubbed of barb and aggression that if the most hypersensitive weirdo on campus mistakenly wandered into a performance, the words he would hear would fall on him like a soft rain, producing a gentle chuckle and encouraging him to toddle back to his dorm, tuck himself in, and commence a dreamless sleep—not text Mom and Dad that some monster had upset him with a joke.” 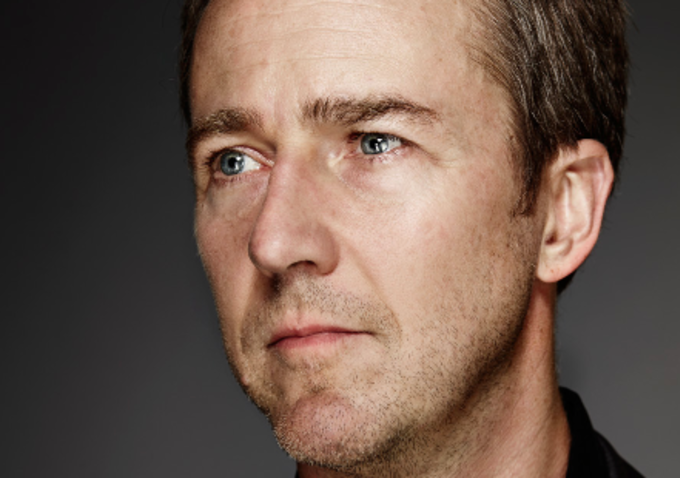 "Edward Norton Has a Solution to the 'Monetization' of the Oscars": A great interview conducted by Eric Kohn of Indiewire.

“[Norton:] ‘I think the industry needs to set some boundaries. It's like Melville's story ‘Bartleby, the Scrivener’ — you know, an individual who tries to politely say, ‘I prefer not to.’ It's like Garry Trudeau's line: ‘America is the only country in the world where failure to promote oneself is considered arrogant.’ If you skip out on it, everybody takes that as a middle finger. And that's challenging, even for a very brave person who doesn't want to diminish a quality experience. It's going to happen anyway in many ways.’ [Indiewire:] ‘What do you mean?’ [Norton:] ‘I’ve talked about this with some people. I think the Academy could do things. Nobody in the industry cares about any of it except the Academy, which carries weight, because they're peers. The rest of it is seen as a dog and pony show. The Academy, which is a private organization, could save the industry by saying, ‘It's our award and we can do whatever we want.’ They could say that any film putting out paid solicitation ads of any kind — all these for your consideration ads that cost millions and millions of dollars, which just solicit awards — they could say that any film using them is disqualified from the Academy Awards. It would end it overnight.’” 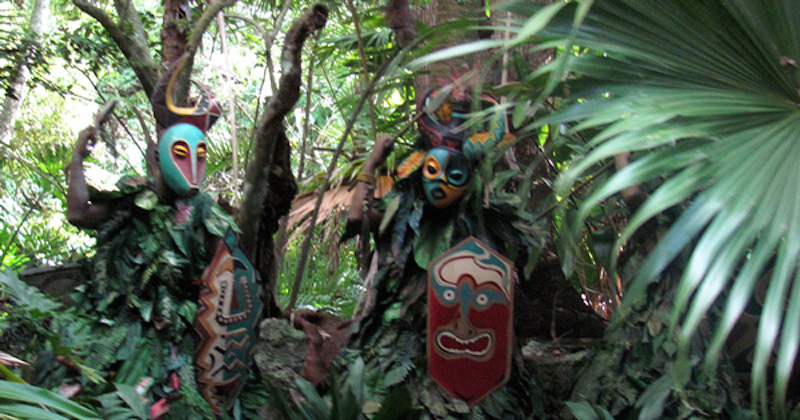 “In the spring of 2015, a nine-year-old boy named Dexter went to Disneyland with his family and found himself deeply unsettled — not by a scary ride or the unpleasantness of waiting in line, but by some of the most unsettling cultural issues of our time: racial and gender stereotypes. Disney, the world’s most prolific purveyor of pink plastic, has a long history of perpetuating gender stereotypes and feeding our unconscious biases, but what Dexter so astutely observed seemed like a particularly acute symptom of a larger cultural malady. I’ve known Dexter since he was a peanut — the son of my dear friends Jake Barton and Jenny Raymond, he is the smartest, most sensitive child I know — so I was hardly surprised by what happened next: Upon returning to New York, Dexter conferred with his classmate Sybilla, who had just had a similar experience while visiting Disney World in Orlando with her family; with the disarming sincerity and simplicity of which only children are capable, the two third graders wrote a magnificent, precocious, immensely insightful open letter to Disney, calling out the problematic treatment of race and gender, and suggesting more intelligent and culturally sensitive alternatives.” 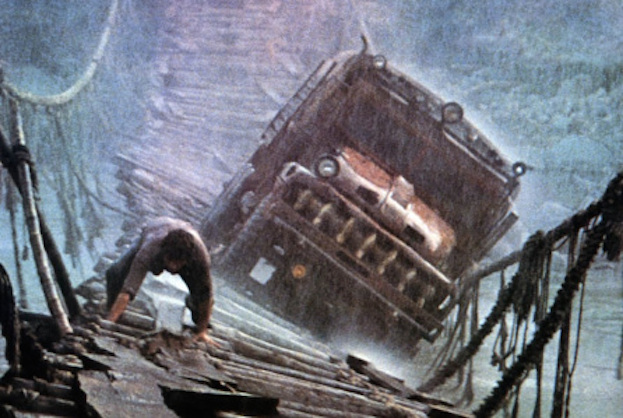 “The chase scene [in ‘The French Connection’] was never in a script. I created that chase scene, with the producer Philip D’Antoni. We just spit-balled ideas. We walked out of my apartment, headed South in Manhattan and we kept walking until we came up with that chase scene, letting the atmosphere of the city guide us. The steam coming off the street, and sound of the subway rumbling beneath our feet, the treacherous traffic on crowded streets. We didn’t have a lot of time, because Dick Zanuck, who had already turned it down, told us that he would make the film for a million and a half dollars if we could get it done right away, because he knew he was going to get fired. And he was right. That’s why we settled on Gene Hackman who was not our first choice. We walked 55 blocks and came up with a chase. Nobody ever asked to see a script. We went three hundred thousand over that million and a half dollar budget, and they wanted to kill me every day for that. Nobody spent the kind of money they do today. You had groups of guys running the studios who were afraid they might be out of touch, and young filmmakers who had fresh ideas that were more like what indie film is today than what fit the classic Hollywood movie, which was the musicals of the ‘40s and the ‘50s like ‘Singing in the Rain.’ What prevails in American film today that didn’t then was, if a film succeeds and seems to represent a formula, it will be repeated over and over, with more and more computer-generated images. I can’t think of any superhero film that existed in the 70s. None come to mind. No formulas and the start was the fear of those executives back then that ‘Easy Rider’ caused in the hearts of guys running the studios back then.” 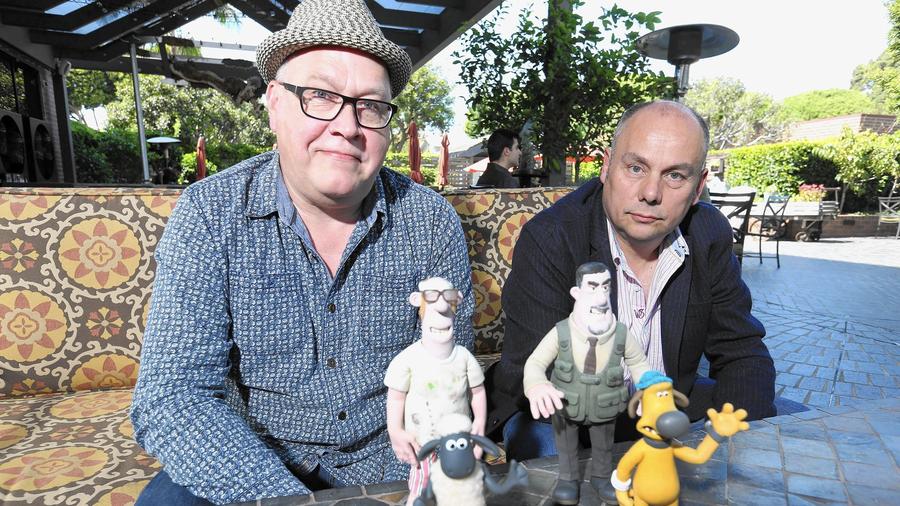 "How 'Shaun the Sheep' creators use woofs, oinks, bleats but no words in its wooly adventure": Filmmakers Richard Starzak and Mark Burton chat with Rebecca Keegan of The Los Angeles Times.

“In 2007, when Starzak started writing and directing the ‘Shaun the Sheep’ TV show, which aired on the Disney Channel in the U.S., he needed to keep budgets down. Manipulating characters' mouths was time-consuming for animators and, therefore, expensive. ‘The initial idea was labor-saving,’ Starzak said of the lack of dialogue. ‘I knew it would help us internationally a bit, but I had no idea — Shaun's gone really global now. That's been the big surprise. The lovely thing is when you go to China and everyone laughs in the same place.’ Starzak, who previously went by the name Richard Goleszowski, started out fetching coffee and props at Aardman in the 1980s. He worked as an animator and director on projects as varied as the video for the Peter Gabriel song ‘Sledgehammer’ and a British TV special about Rudolph the Red-Nosed Reindeer's overweight son, Robbie. He's the shy, self-effacing member of the filmmaking duo, while Burton, who wrote dialogue for ‘Chicken Run’ as well as the script for DreamWorks Animation's ‘Madagascar,’ is more gregarious. Together, they have a dryly humorous rapport. Burton teased Starzak when the latter paused before listing his film references for ‘Shaun the Sheep.’ ‘You're trying to sound film-literate, but you can't. Your crib sheet's gone missing,’ Burton said. ‘Uhhhhh … ‘Casablanca.’’ Actually, the list includes classic film comedians like Charlie Chaplin, Buster Keaton, Laurel and Hardy and Jacques Tati.” 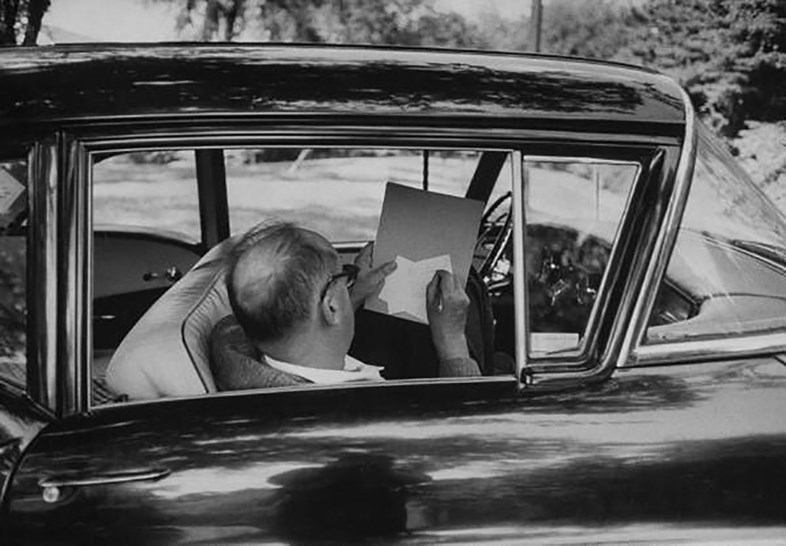 AnOther Mag's Holly Isard presents a glimpse at the various places 'where great writers write,' including Vladimir Nabokov (pictured above).

Proper Path: The Films of Paul Thomas Anderson - A Tribute from Parker Mott on Vimeo.