TIFF: The Pervert's Guide to Cinema 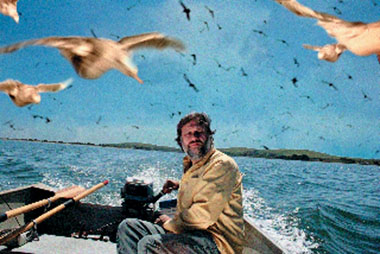 Slavoj Zizek in the wake of Melanie Daniels, crossing Bodega Bay in a small motorboat.

At 150 minutes, in three parts, "The Pervert's Guide to Cinema" (catchy title, no?) is probably the fastest-moving, most shamelessly enjoyable film I've seen in Toronto so far this year. There is no story, and only one character -- but what a character he is. He's Slavoj Zizek (more precisely, Žižek), Slovenian philosopher and psychoanalyst, and he comes across as a delightfully unhinged Freudian maniac, the sort of heavily-accented mad doctor who might narrate an Ed Wood movie. But, believe it or not, he's the real thing. (I Googled him to be absolutely sure, and now I can't wait to read more of, and about, him.)

And what he does as narrator of this film (directed by Sophie Fiennes, sister of actors Ralph and Joseph) is talk -- and talk and talk and talk -- about movies. He's terrific at it, too. Turns out the good doctor is quite the cinephiliac (with a strong Freudian/Lacanian bent, natch), and in what feels almost like a two-and-a-half-hour free-association, he lets his brilliant and facile mind wander through many of the greatest films ever made -- with a heavy concentration on Hitchcock (emphasis on "Psycho" (1960), "Vertigo" and "The Birds"), David Lynch ("Lost Highway," "Blue Velvet," "Mulholland Drive," "Wild at Heart") and Andrei Tarkovsky ("Solaris," "Stalker"). One image, one idea, flows into the next, which makes for an intoxicating strain of film criticism.

This isn't quite the first film of this sort ("A Journey Through American Cinema with Martin Scorsese" springs to mind) -- but there ought to be more. The genre of movies about movies -- in-depth appreciations and evaluations of films that go beyond clip reels like "That's Entertainment!" into something deeper and, well, more entertaining -- is something I hope will blossom over the next few years. It's something I've been thinking about a lot: Film criticism needs to expand beyond mere words, and make better use of other media, including the web and film/video itself, where the images themselves can be seen while they are analyzed.

"Pervert's Guide" begins with a series of Rorschach ink blots, and the movie itself is a lot like those patterns. You may reject some of Zizek's theories or readings, but he's always playing around with fascinating ideas. Are Groucho, Chico and Harpo the Superego, Ego, and Id? Well, to some extent, but that's too neat a formula. And Zizek is flat-out wrong when he describes Harpo as both innocent and evil. Harpo is neither, and Zizek oughtta know better -- he's the Id (much more clearly than Grouch or Chico fit the roles he assigns them), and the Id is amoral, pure appetite, beyond good and evil.

But that's just a quibble. Zizek's central thesis, the way I see it, is that the forces that created the world of "reality" -- God, evolution, however you choose to conceive them -- have left it unfinished and in less than optimal working condition. (No argument from me there.) The world is broken and incomplete (and unstable, forever changing), and fantasy (in every sense of the word) is necessary to complete our experience of reality.

That's where the cinema comes in, as the form that most closely resembles and reflects our own (sub-)consciousness. We are limited in our exposure to reality (through our senses and our brains and our emotions) -- there's no such thing as direct contact with "reality" -- and so, the movies provide the necessary "phantasmic space" (or a similar marvelous phrase Zizek uses) in the place of the abyss. Or something like that.

Zizek offers a perfect short-hand description of what's going on in "Eyes Wide Shut," when he says that after Nicole Kidman impregnates Cruise's character with her fantasy, he spends the rest of the movie trying to "catch up." (Zizek doesn't go much further, but I will: The movie begins with Kidman in the bathroom mirror. They're getting ready to go out and she asks him how she looks. He says she's "beautiful" -- but he doesn't even look at her. He no longer sees her at all; she's just a projection of his own idea of his "wife." That's why she lets him have it later when he smugly says he doesn't feel jealous or threatened when another man finds her attractive because he knows her. And he doesn't know the first thing about her....)

Zizek even takes a brief step into my particular area of fascination and expertise: plumbing in the cinema, and uses techniques similar to ones I've envisioned for exploring the subject (by placing himself into interiors and exteriors from the films). He cites the motel toilet scene in "The Conversation" as a metaphor for our experience of reality. When we flush, we know the excrement (or in that case, blood) doesn't really disappear, leaving a clean white bowl "Sanitized for Your Protection." It has to go somewhere. And our nightmare (defined by him more or less as fantasy made real) is that the awful stuff we've put down there could (and will, eventually) come back up. He compares Harry Caul (Gene Hackman) staring into the toilet bowl to the existential act of looking into the void -- and to the act of watching a movie screen, as the excrement is served back up. Ah, what a marvelous image for the magic of the movies!

For those who want to read more about Zizek and how his ideas relate to the movies (his newest book is called "The Parallax View," after the terrific 1974 Alan Pakula thriller starring Warren Beatty), I recommend starting off with the Wikipedia article, which includes this:

The fetish is the embodiment of a lie that enables us to endure an unbearable truth (Slavoj Žižek 2000). This is the Real itself (in the Lacanian sense), an isolated object (the Lacanian objet petit a) whose fascinating and meaningful presence guarantees the structural real, the social order. This real enables one to gain a distance from everyday reality: one introduces an object that has no place inside it, that cannot be named or otherwise symbolized -- the photo collage of the beloved in the film "The Truman Show," for example. What Žižek means is that every symbolic structure must contain an element that embodies the moment of its impossibility, around which it is organized. This is both impossible and real (in its effect) at the same time. The symptom on the other hand is the return of the repressed truth in a different form.

Žižek explains this objet petit a—the MacGuffin—in the following way: "MacGuffin is objet petit a pure and simple: the lack, the remainder of the real that sets in motion the symbolic movement of interpretation, a hole at the center of the symbolic order, the mere appearance of some secret to be explained, interpreted, etc." (Love thy symptom as thyself).

And to think, just the other day, I was describing the device of narrative itself as the MacGuffin! That's what I love about films, and film festivals, and this film in particular -- somehow or another, everything connects and reconnects in your memory and imagination.

After seeing "Pervert's Guide" (by myself), I met some friends for a fantastic Ethiopian feast at a nearby restaurant. Every movie we talked about reminded me of something Zizek had said -- or that he had triggered in my own head -- in "The Pervert's Guide to the Cinema." I couldn't shut up about it, even when I disagreed with Zizek (or, OK, maybe especially then). I think that's one measure of a good movie. And I'm sure I'll be reminded of more from this movie as I see more movies in the festival...

P.S. OK, one last thing from the Wikipedia article about Zizek's notion of "The Real," much of which he also discusses in "Pervert's Guide":

The symbolic real: the signifier reduced to a meaningless formula (as in quantum physics, which like every science grasps at the real but only produces barely comprehensible concepts)

The real real: a horrific thing, that which conveys the sense of horror in horror films

The imaginary real: an unfathomable something that permeates things as a trace of the sublime. This form of the real becomes perceptible in the film "The Full Monty," for instance, in the fact that in stripping the unemployed protagonists disrobe completely; in other words, through this extra gesture of voluntary degradation something else, of the order of the sublime, becomes visible.

If you find that a bit dry, believe me, Zizek in "Pervert's Guide" is not -- especially when watering his Lynchian tulips ("Flowers are not suitable for children"), and launching into a Herzogian fit of disgust over obscenity of these vile eruptions of nature: "It's an open invitation to all the insects: 'Please come and screw me!'"
Advertisement