An American actor in film and theatre, as well as a director, Al Pacino is an Oscar-winning, Emmy-winning, and Tony-winning master who is widely considered to be one of the best actors of his generation. Especially early in his career, Al Pacino movies meant a different caliber of performance. Working consistently with some of the world’s best filmmakers for five decades, Al Pacino has also been given numerous lifetime achievement awards, including the National Medal of Arts and the Cecil B. DeMille Award. Generations of actors have grown up inspired by Al Pacino films. Al Pacino has been married twice and has three children.

Rose and Salvatore Pacino gave the world Alfredo James Pacino on April 25, 1940. Nicknamed “Sonny” as a teenager, Pacino was dreamt of becoming a baseball player as he grew up in New York City, but everything changed when he went to the High School of Performing Arts. His parents were divorced by now, and his mother did not support the decision, meaning that Pacino left home at a young age, getting odd jobs and working theatre gigs in the Bronx in the ‘50s. One of his early teachers at a place called the HB Studio was Charlie Laughton, who became his mentor, and he would later study under the legendary Lee Strasberg at the Actors Studio, which he returned to in 2019.

Like a lot of actors of his generation, the actor honed the craft that would later be defined in Al Pacino films on the stage first, winning an Obie Award in 1968 for Israel Horovitz’s The Indian Wants the Bronx, and then a Tony Award the next year for Don Petersen’s Does a Tiger Wear a Necktie?. Al Pacino would return to the stage in every chapter of his career, earning raves for his work with David Mamet in the ‘80s, and revivals of major works in the years since. 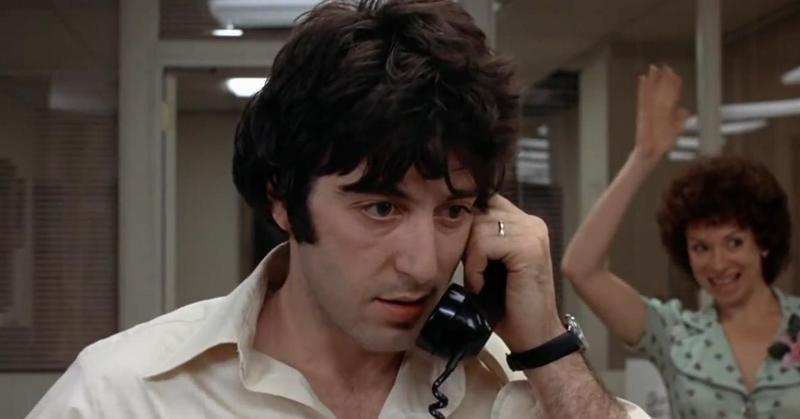 Al Pacino’s film career took off with 1971’s “Panic in Needle Park,” which earned enough attention that a young filmmaker named Francis Ford Coppola decided to check it out, and the rest was history. In 1972, Coppola cast Al Pacino in "The Godfather" as Michael Corleone and the result was one of the most acclaimed movies of all time, and its sequels “The Godfather, Part II” in 1974 and “The Godfather, Part III” in 1990. He earned his first Oscar nomination, although he famously boycotted the ceremony because he was upset he was in supporting when he truly belonged in lead.

A string of massive critical and commercial hits would follow, including “Scarecrow” with Gene Hackman, “Serpico” (his second Oscar nomination), “The Godfather, Part II” (his third), Sidney Lumet’s “Dog Day Afternoon” (his fourth Oscar nod in consecutive years), “Bobby Deerfield,” and a Norman Jewison’s courtroom drama “…And Justice For All,” which netted Pacino his fifth Oscar nomination in his first decade in the profession. He became known as one of the most dominant performers on the screen even though Al Pacino's height stands only 5' 7". Many critics consider Al Pacino in "Dog Day Afternoon" to be among the best performances of all time.

The 1980s weren’t as nice to Al Pacino as the ‘70s. A few critical bombs followed, including “Cruising” and “Author! Author!,” although one role from this period would become one of Pacino’s most iconic. As Tony Montana in Brian De Palma’s “Scarface,” Pacino created a legendary character that would come to be one of his most defining and produce some of the most legendary Al Pacino quotes and impressions. A few passion projects, including the disastrous “Revolution,” would push him out of films for a large portion of the decade as he went back to the stage to find himself again. This period gave the world the first of Al Pacino's children, Julie Marie, whose mother was an acting coach named Jan Tarrant. 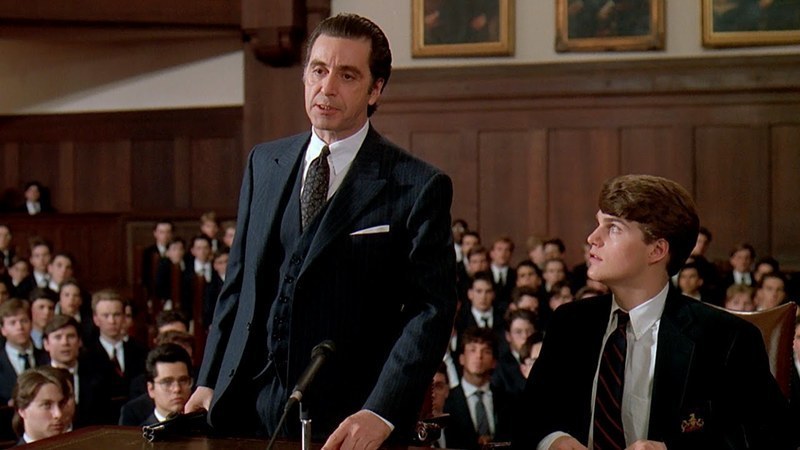 The Oscar winner returned confident in how to use his middle-age to his advantage in Al Pacino films like 1989’s “Sea of Love” and 1990’s “Dick Tracy.” The third film in the “Godfather Saga” was considered a disappointment, but the actor had a nice run of smaller movies in the ‘90s, including “Frankie and Johnny” with Michelle Pfeiffer, “Glengarry Glen Ross” with Jack Lemmon, and a reunion with De Palma for 1993’s “Carlito’s Way.”

Perhaps the most notable film from this era as Martin Brest’s “Scent of a Woman,” which won Pacino his only Oscar, widely considered a sort of Lifetime Achievement Award for not giving him a trophy earlier. As a blind Army Lieutenant, Pacino chews the scenery in ways that would amplify the impressions people do of him, but he also finds truth in the melodrama in ways that other actors would fail to do. And he should have won three or four times before then anyway.

Major roles would follow the Oscar, and many of them would seem to riff on this new over-the-top persona, including “Heat,” “The Devil’s Advocate,” “Donnie Brasco,” and “Any Given Sunday.” He would start the next century with the birth of twins, Anton James and Olivia Rose, with actress Beverly D’Angelo, whom he had been partners with since 1996. The two broke up in 2003 and Al Pacino has never been married despite confirmed relationships with D’Angelo, Diane Keaton, Tuesday Weld, Jill Clayburgh, and more. He has been with the same woman, Lucila Polak, since 2008.

The 2000s were an odd period for Al Pacino, but he work with daring filmmakers like Christopher Nolan (“Insomnia”), Andrew Niccol (“S1m0ne”), and Steven Soderbergh (“Ocean’s Thirteen”), and try develop his own passion projects. Disasters would also litter this part of Pacino’s career, including “Gigli,” “88 Minutes,” “Jack and Jill,” and “Righteous Kill,” but one of his most-acclaimed parts dropped in here too in HBO’s adaptation of the Pulitzer Prize-winning “Angels in America,” for which Pacino won an Emmy. Other quality work on HBO would follow, including “You Don’t Know Jack,” “Phil Spector,” and “Paterno.” It’s arguable that Pacino’s best work in the 2010s was on TV. 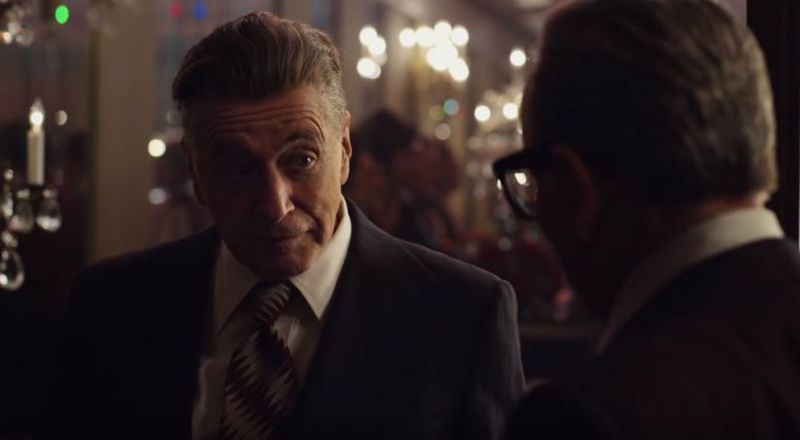 Al Pacino's age didn't hold him back as he made a major comeback in 2019, appearing in arguably the two most critically acclaimed films of the year. He has a minor role in Quentin Tarantino’s “Once Upon a Time … in Hollywood,” but a major one in Martin Scorsese’s “The Irishman,” reuniting with friend Robert De Niro, and marking the first time that arguably the best actor and best director of the ‘70s have ever worked together. Al Pacino and Robert De Niro worked together on "The Godfather, Part II," "Heat" and "Righteous Kill," but Pacino had never worked with Scorsese. Al Pacino and Robert De Niro have been friends since the '70s and were once considered the two best living actors. Seeing the pair work with Scorsese for the first time was worth the wait as it's one of the best Al Pacino movies.

In all, Al Pacino has been nominated for eight Oscars, 17 Golden Globes, four BAFTAs, three Emmys, three Golden Globes, and three Tony Awards. As of 2019, Al Pacino's net worth was reportedly $165 million.

"Scent of a Woman"

"I don't ever give my opinion. Opinions I have about anything are in my personal life.

"There has been a lot of self-doubt and unwelcome events in my life."

"The hardest thing about being famous is that people are always nice to you. You're in a conversation and everybody's agreeing with what you're saying - even if you say something totally crazy. You need people who can tell you what you don't want to hear."

"You do get very tired sometimes, when you're sitting around for hours in movies. You get depleted."

"I was not prepared for fame. It hit me hard, and I did not have the capacity to cope."

More Al Pacino Quotes From the Actor Himself

The Godfather Coda: The Death of Michael Corleone (2020)

A review of the Paramount+ series The Offer, about the making of The Godfather.

The latest on Blu-ray and streaming, including Encanto, Eternals, House of Gucci, and Criterion editions of The Piano and Miller's Crossing.

The Films That Could Shake Up the Oscar Race

A preview of the movies that skipped the fall festivals that could still win the next Best Picture Oscar.

Breaking In: On the 40th Anniversary of Tangerine Dream's Thief Score

An appreciation of Tangerine Dream's score for Michael Mann's Thief and how it changed the industry.

The pioneering character actor always brought something extra to every project.

The Joke's On Him: Tom Cruise and Eyes Wide Shut

An appreciation of Tom Cruise's performance in "Eyes Wide Shut."

The latest and greatest on Blu-ray and DVD, including Tenet, The Irishman, Possessor, The Dark and the Wicked, and special edition releases of Total Recall, The Lord of the Rings, and Tremors.

Why Heat is the Greatest Heist Movie Ever Made

A reappreciation of Michael Mann's Heat on its 25th anniversary.

A Look Back at Martin Scorsese's The Irishman

Expressing our gratitude to Managing Editor Brian Tallerico, who has now been a part of the RogerEbert.com team for six years.

An essay about the 2018 film Book Club, as excerpted from the latest edition of BW/DR.

Thumbnails Special Edition: In Praise of Our Writers at RogerEbert.com

A special edition of Thumbnails highlighting articles about our writers at RogerEbert.com.

The Uncanny Valleys of Martin Scorsese's The Irishman

It’s possible that even the uncanny valley ushered in by Scorsese’s so-called “youthification” is there by the director’s elaborate design.

The best films of 2019, as chosen by the staff of RogerEbert.com.

Matt writes: With Martin Scorsese's "The Irishman" being named the best film of 2019 by the National Board of Review and the New York Film Critics Circle soon after its Netflix debut over Thanksgiving weekend, let us take a closer look at this masterwork.

Martin Scorsese’s Dangerous Men: On the Actors of The Irishman

A piece on Robert De Niro, Harvey Keitel, and Joe Pesci, and what they've meant to the career of Martin Scorsese.

Video Interview: Martin Scorsese and Al Pacino on The Irishman

A special interview with Martin Scorsese and Al Pacino about their new movie, The Irishman.

Bright Wall/Dark Room November 2019: I Don't Know How to Do Anything Else by Kellie Herson

An essay about Robert De Niro, as excerpted from the online magazine Bright Wall/Dark Room.