Biggest Acting, Best and Worst: Over the top, Ma! 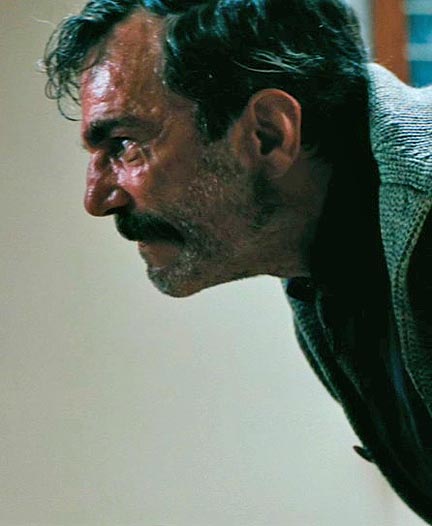 I believe it was Gordon Gekko who proclaimed: "Ham is good!"

The "Wall Street" supervillain (superhero?) was not advocating violation of any dietary laws, of course, but simply stating a fact: Sometimes Big Acting can be quite enjoyable. Other times, of course, it can be cringe-worthy, irritating, risible, embarrassing. Only you can decide which is which. For you.

Take for example the story of Faye Dunaway as Joan Crawford in "Mommie Dearest" -- she of "No wire hangers!" and "Eat your meat!" (both precursors of "I drink your milkshake!"). Pre-release publicity reports claimed that Dunaway was giving a serious dramatic performance. But from the very first screenings it was painfully (yet fasciatingly) clear that somebody was going off her rocker -- but which actress was it: Crawford or Dunaway?

Performances pitched at the balcony, or the moon, always take the risk of falling somewhere between "tour-de-force" and "trying way too hard," virtuosity and showboating. And opinions may vary about where they come down. (See "A Journey to the End of Taste," below.) You may wince at the Method nakedness displayed by Marlon Brando or James Dean in some of their most intense emotional moments ("You're tearing me apart!"). Or you may rejoice at even the most outré dramatic and/or comedic efforts of Daniel Day-Lewis, Sean Penn, Johnny Depp, Bette Davis, Jack Nicholson, Klaus Kinski, Will Ferrell, Robert De Niro, Christopher Walken, Kevin Spacey, Whoopi Goldberg, Al Pacino, Robin Williams, Dustin Hoffman, Barbra Streisand, Nicolas Cage, Ben Stiller, Tyler Perry, Owen Wilson, Gene Wilder... while others find them excruciating, overwrought or unintentionally campy.

The bigger the performance, the bigger the risks. Or maybe not. Just look over the history of Oscar nominations for acting.

In Stanley Kubrick's "The Shining," Jack Nicholson plays a guy who, as one wag said about Daniel Plainview in "There Will Be Blood," starts off insane and goes even more insane. The End. But this raises the question: Isn't "too much" precisely the point in some movies? One of my favorite scary-funny moments in all of cinema is when Jack Torrance puts his hands over his face in alcoholic anguish and desperation, then drops them and, startlingly, gazes straight into the camera at an off-screen bartender: "Hi Lloyd. Little slow tonight, isn't it? Hah-hahahahahahahahaha!" (Let's not forget Shelly Duvall's famously frazzled and hysterical performance, either.)

Just because an actor is "big" doesn't mean he or she can't be subtle, too. Klaus Kinski in Werner Herzog's "Aguirre, the Wrath of God" plays a raging conquistador in search of El Dorado, but he's not just a big slice of Deutsch jamon. He finds authentic madness and makes it terrifying....

Then there's comedy. I find George C. Scott's broad clowning as General Buck Turgidson in Kubrick's "Dr. Strangelove" laugh-out-loud hilarious. Likewise Sterling Hayden as Brigadier General Jack D. Ripper and Slim Pickens as Major T.J. "King" Kong. Alan Arkin can rant and sputter (in "Little Murders" and "Catch-22") and crack me up. But Jim Carrey (exception: "Eternal Sunshine..."), Jerry Lewis (exception: "The Nutty Professor," because Buddy Love balances out Julius Kelp) and Mickey Rooney ("Breakfast at Tiffany's" -- ouch) usually make me want to put a pillow over my head. Or theirs. I was never a fan of Milton Berle or Sid Caesar, either. But Jonathan Winters knocks me out.

I think Meryl Streep (an actress I thought was too calculating early in her career) knows how to do "big comedy" expertly, as in "Death Becomes Her" or "The Devil Wears Prada" (2006). And yet I wanted to hide under the table watching Annette Bening (an actress whose sense of proportion I've always admired) in "American Beauty." Some sketch-comedian friends of mine reported similar reactions: We felt bad for her, and we blamed the director, Sam Mendes. And then there's Theresa Russell's career-threatening star turn in "Whore," which reportedly was the performance director Ken Russell (no relation) pushed her to deliver, but not the one she wanted to give.

I could go on and on. Here's what I want to ask you: What are some of your favorite "over-the-top" performances -- drama, comedy, both, neither -- and what makes them work for you? What performances, characters or movies are just too excruciating for you to stand? Can you think of a fingernails-on-a-blackboard performance is that makes you seriously uncomfortable and that you admire?

Reach deep within yourself. Don't hold back....