We are all Untouchables: A Bollywood Ballad:Discussed by Omer Mozaffar 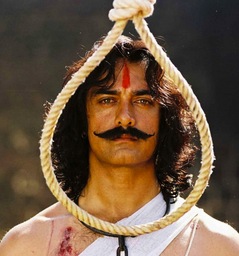 After commenting on George Clooney as Hollywood star, and as star of the very excellent Jason Reitman film "Up in the Air," I decided to shift attention to a similar figure in Bollywood cinema: Aamir Khan. Aamir Khan is the star of the most successful Bollywood movie in history, the comedy "Three Idiots." Like Clooney (and perhaps Redford before him) he uses his star power to make serious movies, with the most famous being "Lagaan." Here, in "Mangal Pandy: The Rising" we look at this story of one of the respected heroes of Indian cultural memory.

On the surface, the film continues the popular David vs. Goliath anti-imperialist genre we find in such films as "The Ten Commandments," "King of Kings," "Lion of the Desert," "The Battle of Algiers," some revisionist westerns like "The Outlaw Josey Wales," the TV miniseries "Masada," "Braveheart," and "Paradise Now," where otherwise unlikely characters take on the role of heroes and anti-heroes against occupation and exploitation. "Mangal Pandey: The Rising" follows that tradition, with a story that includes ruthless one-dimensional imperialists, former servants of the crown who "go native" and betray the empire, as well as collaborators for the empire who betray their own people, and multi-dimensional, unlikely heroes.

It is thus, Post-Colonial, in critiquing the conduct and impact of empire, while also remaining self-critical. Meaning, Indians in this story are victims as well as participants in the atrocities of the British Army and East India Company. The general idea, however, is that history is often written by the victors who depict the imperialists as civilized and justified in their actions, while the "natives" are often savage, uncouth, beneficiaries of the imperialism.

The post-colonial artists and authors, however, present the "peoples' history" asserting that empire is nothing less than exploitation and ruthless subjugation of people and land. Thus, from the British Imperialist perspective, Mangal Pandey's revolt launched "The Sepoy Mutiny of 1857" yet for many Indians it was "The Uprising" and "The First War of Indian Independence."

As a Bollywood film, it also remains true to those conventions, featuring acting (and edits) that might seem excessive (in the way we might consider the acting of Jack Nicholson, Al Pacino, John Wayne or James Cagney to be frequently overacting), vibrant colors, captivating songs and elaborate dance sequences, and lines that are extra dramatic (calling for a split second pause in action). 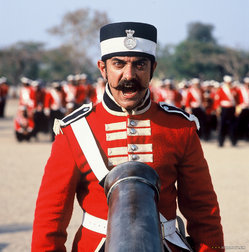 It also has a thread of classical Greek influence, featuring a sort of Greek Chorus in the form of a troupe of performers who travel on a great Indian elephant commenting on the state of Indian life. Perhaps this is a convention of Indian art that I did not notice before.

While seamlessly merging these styles into one unique whole, the film is especially interesting in its comments on perspective. First, we find the issue of perspective explored in matters of tradition and cultural sensitivity. It is one thing to speak of religious traditions in a vacuum, but when we add social context to those same traditions, we visit a new dimension of concern. Here, the film does not hesitate to critique certain traditional Indian practices it finds problematic. 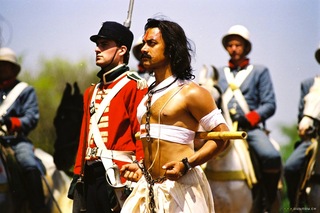 But, the central event that inspires the Revolt in this film might in a vacuum seem to be something easily reformed: the Indian Sepoy soldiers are to lubricate their gun barrels with grease that is rumored to be produced from the fat of cows (problematic for Hindus) and pigs (problematic for Muslims). Here, however, in a context of a subjugated people who are watching their girls get sold into slavery, watching their countrymen get trampled, mocked, and killed, watching their land get exploited dry, the matter of having to chew open a packet of grease becomes the fuel for massive unrest. # Second, this event itself - the Rising - is such an important event in Indian cultural memory itself, yet the actual revolt led by Mangal Pandey was remarkably small.

We would think that the film is leading us to a huge national riot, but Pandey's revolt was surprisingly small. Its impact, however, was immense, and the film illustrates that result through a brief montage and set of stills. In fact, the scope of this film is so deceptively small, that I wonder if we can call it an epic? Nevertheless, we often find that our great heroes and defining pivotal events were themselves far smaller than the ripples they later caused. 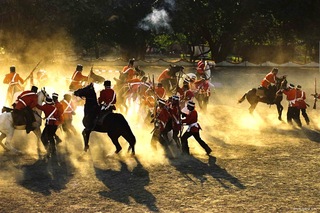 To give an idea of the impact of the events of 1857, I should mention that some of the most influential Islamic seminaries were established during the following decade in India, providing various responses to Colonialism. One of these institutions, the Madrasa at Deoband provides the dominant seminary curriculum for many Islamic schools from the Indian subcontinent through Central Asia.

Regardless of what we might think of them, the Taliban are or were students of this curriculum. Now, consider the link: the Madrasa at Deoband was formed as one response to the British Empire, and subsequently had a hand (one hand among many others) some 140 years later in launching the force which we -- the United States -- regard as an obstacle to our own imperialism. In any case, history does take interesting turns.

What are some of your favorite historical films and epics, and what did you like about them?

"Mangal Pandey - The Rising" can be viewed legally in 16 parts on YouTube. Begin here: