It is a wild and unfortunate coincidence that “The Humbling” comes out three months after the vastly superior “Birdman,” and that it covers so much of the same territory through so many similar images, moments and beats.

Both follow the struggles of an aging, once-great actor as he tries to regain his former glory. Both begin with the actor talking to himself in his dressing room as he prepares to take the Broadway stage, addressing his nagging, internal doubts. Both show the actor being accidentally locked out of the theater and dashing through the streets of Times Square before reentering through the lobby. And both feature the actor succumbing to sequences that blur fantasy and reality, both for him and for us as viewers.

But both also feature veteran stars doing some of their best work in a long time in their respective leading roles: first Michael Keaton in “Birdman” and now Al Pacino in “The Humbling.” Pacino dials down the manic, wide-eyed “Hoo-ah!” that has defined his screen presence over the past couple decades, and often rendered the Method master a parody of himself. Reteaming with Barry Levinson (who directed him as Dr. Jack Kevorkian in the 2010 HBO film “You Don’t Know Jack”), Pacino gives a refreshingly quiet and understated performance with poignant moments of vulnerability. It is the most consistent factor in a film that is frustratingly inconsistent.

“The Humbling” is based on Philip Roth’s 2009 novel of the same name, and in typical Roth fashion, it features an older man and a younger woman in a relationship which may seem ill-advised and even toxic, but provides some fulfillment for both parties in unusual ways. (See: “The Human Stain,” “Elegy.”) Here, the counterpart to Pacino’s Simon Axler is Greta Gerwig as a free-spirited woman named Pegeen who’s half his age. She’s also the daughter of some longtime actor friends, and a lesbian, sometimes, when it suits her; elusive and manipulative, she’s emblematic of the negative way nearly all of the female characters are portrayed in “The Humbling.” But, given that the script comes from Buck Henry and Michal Zebede, there are also many moments of intelligent humor and absurd observation. This is what we mean when we talk about inconsistency.

At the film’s start, a befuddled Simon has a breakdown on stage during a performance of Shakespeare’s “As You Like It.” Even as he’s being wheeled into the hospital for treatment, he wonders whether his suffering is believable; all the world really is a stage for him. During a stay at a leafy rehabilitation center arranged by his agent (Charles Grodin, one of many great actors whose talents are underused here), Simon describes in fragile tones and vivid detail his fear over having lost his gift. The words don’t come anymore when he needs them, and inspiration is even harder to find. “The Humbling” is at its best in these introspective, reflective moments. The openness, the doubt and the questioning of purpose give Simon (and the actor playing him) a powerful accessibility and a relatable sense of humanity, especially in contrast with his formerly famous charisma.

But that charisma is exactly what prompts Pegeen to come knocking on Simon’s door once he returns to his sprawling and lonely Connecticut estate. She’s had a crush on him since she was 8; now, nearly 30 years later, she’s finally old enough to act on it. Gerwig’s naturalism provides an intriguing contrast at first with Pacino’s studied intensity, but eventually it becomes clear that her character is more of an idea that an actual, fleshed-out figure, even as she remains thoroughly dominant. While that’s probably intentional, her vagueness and flightiness make it difficult to connect with her.

Among the other crazy women surrounding Simon are Sybil (Broadway veteran Nina Arianda), a socialite he met at the psychiatric hospital who’s now stalking him in hopes of hiring him to kill her husband. The versatile actress is given just one note of driven mania to play, which inspires some laughs at the beginning but ultimately grows tiresome.

Kyra Sedgwick, meanwhile, has even less to do as Pegeen’s spurned former girlfriend. She also stalks Simon, angrily warning him that this beguiling creature will ruin his life the way she ruined hers, but she does so mostly by phone. The character feels like an antiquated stereotype of the predatory and possessive lesbian. Dianne Wiest and Dan Hedaya come and go in just a couple of brief scenes as Pegeen’s disapproving parents.

But “The Humbling” reserves its worst treatment for another ex of Pegeen’s: a young black man named Prince (Billy Porter) who used to be a young black woman named Priscilla before undergoing gender reassignment surgery. Through Simon’s behavior, the film regards Prince as a freak and mocks him for having feelings of loneliness and confusion.

While Levinson draws some lovely work from Pacino, his tone veers uncomfortably between intimate honesty and broad comedy; then again, this is tricky, ever-changing material which would be difficult for anyone to navigate well. But Levinson does make the most  of a small budget, a handful of locations (including his own house), and a brief shooting schedule. Similarly, he ventured into low-budget territory in 2012 with the eco-horror film “The Bay,” a real departure for the Oscar-winning director of “Rain Man.” It’s easy to see why Roth’s novel resonated with both Pacino and Levinson with its themes of remorse and redemption at an older age, as well as issues of identity that can only come with a life lived publicly.

But if you’re going to see a film that covers these topics – and does so exquisitely – seek out “Birdman” first. 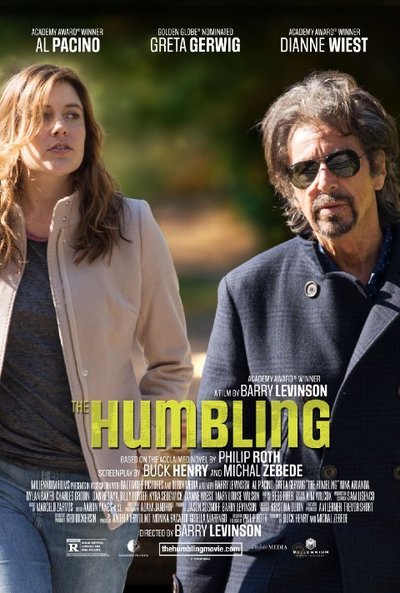