“We tell ourselves stories in order to live,” Joan Didion once said. And yet, watching “Misconduct,” a twisty but exceptionally bone-headed—one might even say cretinous—legal thriller, sitting through its story hardly felt like “living.”

The movie begins with Anthony Hopkins as powerful pharma bigwig Denning having an intense spat with trophy girlfriend Emily (Malin Akerman), something about if-you-don’t-do-X-I-will-do-Y, as is the custom. Emily goes off in a huff and Denning soon gets a text with a picture of Emily with a busted lip. Oops, she’s been kidnapped, and soon Denning is consulting with a hostage-negotiation expert played by Julia Stiles. Soon Denning is in an art gallery with a duffel bag containing a couple million in small denominations, and he winds up punching out a guy who everybody in the movie’s circumscribed world, and outside of it, automatically knows is just a doofy art dealer. So far, so “Okay” and a shrug.

Then, there’s a cut, and a title comes up reading “One Week Earlier.” One suspects that this movie, written by Simon Boyes and Adam Mason, who were also behind 2012’s “Junkie” and directed by Shintaro Shimosawa, making his helming debut after dutifully co-producing some “Grudge” movies and several must-avoid TV series, underwent a little tinkering prior to its coming out, because the flashback structuring serves no purpose except to open the movie with a relatively flashy sequence of events featuring several of its bigger names. In “One Week Earlier” land we are stuck for a while with Josh Duhamel, hotshot low-man-on-the-pole in a big-time law firm. He’s just gotten an estate settlement for a widow whose deceased left no will, so he’s clearly got skills, but there’s also his best pal the computer hacker. “It’s not cheating if the good guy wins,” Ben smirks at one point. Later in the movie, a friend, entrusting Ben with a gun, tells him “If the cops catch you with this, they’re gonna shoot first and ask questions later.” The dialogue is just filled with little gems like that. Anyway, Ben soon receives several communiqués from the self-same Emily we saw standing up to Anthony Hopkins. She’s an old girlfriend of Ben’s, and she offers him several varieties of forbidden fruit: the standard-issue carnal variety, and a file of e-mails that prove that her boss/boyfriend lied egregiously about a disastrous drug trial. The married Ben refuses to have sex with Emily (the scene in which he does so is accompanied by a shockingly kitschy musical theme, by Federico Jusid, that wouldn’t sound out of place in a 1990s Shannon Whirry softcore picture) but concocts a hare-brained scheme to bring down Denning using these highly-illegally-obtained e-mails. What could go wrong? Ben makes his pitch to his firm’s boss. That’s none other than Al Pacino, sporting a goatee (dead giveaway there) and deploying an outrageous Southern accent (the movie is set in Louisiana, although it lacks for any kind of regional character whatsoever) (also, whatever happened to Shannon Whirry? I wonder sometimes).

Mixing things up, narrative-wise, are Ben’s wife, Charlotte (Alice Eve) a busy nurse still suffering after the loss of an unborn child sometime earlier, and a mysterious, motorcycle-riding Asian man who himself suffers from a wasting illness when he’s not randomly menacing, it would seem, a quarter of the film’s cast. Eve’s portrayal of Charlotte is so unyieldingly catatonic that you have to admire its commitment even as you wonder about its ultimate intent. Byung-hun Lee is credited with playing “The Accountant” in the film’s end credits, although you have to have paid super-hard attention to understand just why. Such a ragged and desultory muddle is “Misconduct.” When the movie, in its coda, takes a plot point from a pretty famous L. Scott Turow novel and expects the audience to be taken by this “twist,” well, I can’t speak for anybody else who might be unlucky enough to see this, but I myself no longer had the energy to be insulted. 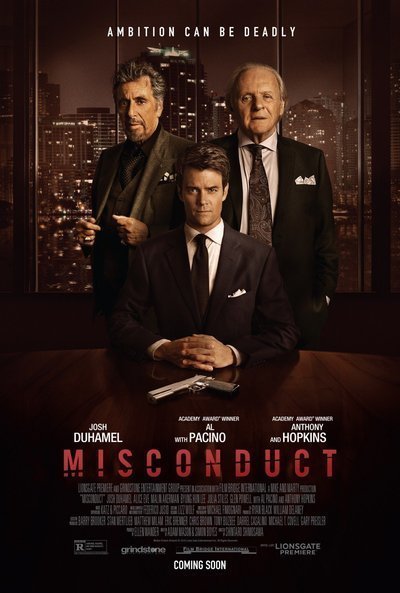 Rated R for language, violence and some sexuality/nudity.

Lee Byung-Hun as The Accountant