100 Great Moments in the Movies

For the centennial of cinema, 100 great moments from the movies:

Clark Gable in "Gone With the Wind":

Buster Keaton standing perfectly still while the wall of a house falls over upon him; he is saved by being exactly placed for an open window.

Charlie Chaplin being recognized by the little blind girl in "City Lights."

The singing of "La Marseillaise" in "Casablanca."

John Wayne putting the reins in his mouth in "True Grit" and galloping across the mountain meadow, weapons in both hands.

Jimmy Stewart in "Vertigo," approaching Kim Novak across the room, realizing she embodies all of his obsessions - better than he knows.

The early film experiment proving that horses do sometimes have all four hoofs off the ground.

Gene Kelly singin' in the rain.

The Man in the Moon getting a cannon shell in his eye, in the Melies film "A Voyage to the Moon."

Pauline in peril, tied to the railroad tracks.

A boy running joyously to greet his returning father, in "Sounder."

Harold Lloyd hanging from a clock face in "Safety Last."

Orson Welles smiling enigmatically in the doorway in "The Third Man."

An angel looking down sadly over Berlin, in Wim Wenders' "Wings of Desire."

The Zapruder film of the Kennedy assassination: Over and over again, a moment frozen in time.

A homesick North African, sadly telling a hooker that what he really wants is not sex but couscous, in Rainer Werner Fassbinder's "Fear Eats the Soul: Ali." 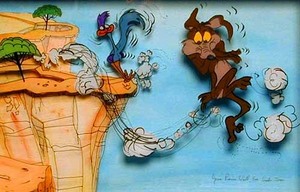 An old man all alone in his home, faced with the death of his wife and the indifference of his children, in Yasujiro Ozu's "Tokyo Story."

"Smoking." Robert Mitchum's response, holding up his cigarette, when Kirk Douglas offers him a smoke in "Out of the Past."

Marcello Mastroianni and Anita Ekberg wading in the fountain in "La Dolce Vita."

The moment in Akira Kurosawa's "High and Low" when a millionaire discovers that it was not his son who was kidnapped, but his chauffeur's son - and then the eyes of the two fathers meet.

The distant sight of people appearing over the horizon at the end of "Schindler's List."

E.T. and friend riding their bicycle across the face of the moon.

Hannibal Lecter smiling at Clarise in "The Silence of the Lambs."

"Wait a minute! Wait a minute! You ain't heard nothin' yet!" The first words heard in the first talkie, "The Jazz Singer," said by Al Jolson.

"Nobody's perfect": Joe E. Brown's last line in "Some Like It Hot," explaining to Tony Curtis why he plans to marry Jack Lemmon even though he is a man.

The shooting party in Renoir's "Rules of the Game."

The haunted eyes of Antoine Doinel, Truffaut's autobiographical hero, in the freeze frame that ends "The 400 Blows."

Jean-Paul Belmondo flipping a cigarette into his mouth in Godard's "Breathless."

The casting of the great iron bell in Andrei Tarkovsky's "Andrei Rublev."

"What have you done to its eyes?" Dialogue by Mia Farrow in "Rosemary's Baby."

Moses parting the Red Sea in "The Ten Commandments."

An old man found dead in a child's swing, his mission completed, at the end of Kurosawa's "Ikiru."

The haunted eyes of the actress Maria Falconetti in Dreyer's "The Passion of Joan of Arc."

The children watching the train pass by in Ray's "Pather Panchali."

The baby carriage bouncing down the steps in Eisenstein's "Battleship Potemkin."

"Are you lookin' at me?" Robert De Niro in "Taxi Driver."

"My father made them an offer they couldn't refuse:" Al Pacino in "The Godfather."

The mysterious body in the photographs in Antonioni's "Blow-Up."

"One word, Benjamin: plastics." From "The Graduate."

A man dying in the desert in von Stroheim's "Greed."

"There ain't no sanity clause!" Chico to Groucho in "A Night at the Opera."

"They call me Mr. Tibbs." Sidney Poitier in Norman Jewison's "In the Heat of the Night."

The sadness of the separated lovers in Jean Vigo's "L'Atalante."

The vast expanse of desert, and then tiny figures appearing, in "Lawrence of Arabia."

Jack Nicholson on the back of the motorcycle, wearing a football helmet, in "Easy Rider."

The geometrical choreography of the Busby Berkeley girls.

The peacock spreading its tail feathers in the snow, in Fellini's "Amarcord." 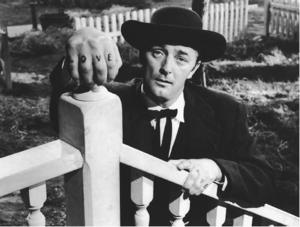 Robert Mitchum in "Night of the Hunter," with "LOVE" tattooed on the knuckles of one hand, and "HATE" on the other.

Bette Davis: "Fasten your seat belts; it's gonna be a bumpy night!" in "All About Eve."

"That spider is as big as a Buick!" Woody Allen in "Annie Hall."

The chariot race in "Ben-Hur."

Barbara Harris singing "It Don't Worry Me" to calm a panicked crowd in Robert Altman's "Nashville."

The game of Russian roulette in "The Deer Hunter."

The shadow of the bottle hidden in the light fixture, in "The Lost Weekend."

"I coulda been a contender." Brando in "On the Waterfront."

George C. Scott's speech about the enemy in "Patton:" "We're going to go through him like crap through a goose." 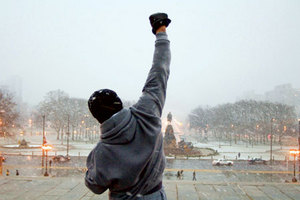 Rocky Balboa running up the steps and pumping his hand into the air, with all of Philadelphia at his feet.

Debra Winger saying goodbye to her children in "Terms of Endearment."

The montage of the kissing scenes in "Cinema Paradiso."

The dinner guests who find they somehow cannot leave, in Bunuel's "The Exterminating Angel." 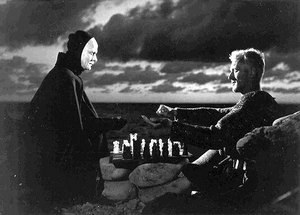 A knight plays chess with Death, in Bergman's "The Seventh Seal."

The savage zeal of the Klansmen in Griffith's "The Birth of a Nation."

The problem of the door that won't stay closed, in Jacques Tati's "Mr. Hulot's Holiday."

"I'm still big! It's the pictures that got small!" Gloria Swanson in "Sunset Boulevard."

"We're a long way from Kansas!" Judy Garland in "The Wizard of Oz."

An overhead shot beginning with an entrance hall, and ending with a closeup of a key in Ingrid Bergman's hand, in Hitchcock's "Notorious."

"There ain't much meat on her, but what's there is choice." Spencer Tracy about Katharine Hepburn in "Pat and Mike."

The day's outing of the mental patients in "One Flew Over the Cuckoo's Nest."

"I always look well when I'm near death." Greta Garbo to Robert Taylor in "Camille."

"It took more than one night to change my name to Shanghai Lily." Marlene Dietrich in "Shanghai Express."

W.C. Fields flinching as a prop man hurls handfuls of fake snow into his face in "The Fatal Glass of Beer."

"The next time you got nothin' to do, and lots of time to do it, come up and see me." Mae West in "My Little Chickadee."

Richard Burton exploding when Elizabeth Taylor reveals their "secret" in "Who's Afraid of Virginia Woolf?" 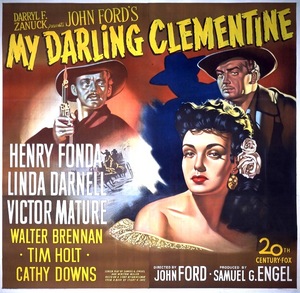 Henry Fonda getting his hair cut in "My Darling Clementine."

"Badges? We ain't got no badges. We don't need no badges. I don't have to show you any stinkin' badges!" Alfonso Bedoya to Humphrey Bogart in "The Treasure of the Sierra Madre."

"There's your dog. Your dog's dead. But there had to be something that made it move. Doesn't there?" Line from Errol Morris' "Gates of Heaven."

Burt Lancaster and Deborah Kerr embrace on the beach in "From Here to Eternity."

Mookie throws the trash can through the window of Sal's Pizzeria, in "Do the Right Thing."

"I love the smell of napalm in the morning," dialogue by Robert Duvall, in "Apocalypse Now."

"Nature, Mr. Allnut, is what we are put in this world to rise above." Katharine Hepburn to Humphrey Bogart in "The African Queen."

"Mother of mercy. Is this the end of Rico?" Edward G. Robinson in "Little Caesar."

TIFF 2020: True Mothers, Limbo, Another Round