“How could a person that I thought to be so genuine and kind and caring be, in fact, the opposite? I will never understand.”—Emily Morales

When disgraced Olympic gymnastics doctor Larry Nassar was put on trial this past January, Judge Rosemarie Aquilina allowed over 150 of his victims, dubbed “sister survivors,” to share their stories. The videotaped testimonials delivered by these courageous women and girls, including the 18-year-old quoted above, are among the most powerful footage I’ve ever seen, detailing horrific acts of sexual abuse administered by the world-renowned physician. Decades of systemic enabling led this serial child molester to have his reputation as a “nice guy who loves kids” safeguarded until he was finally caught.

I couldn’t look at Nassar without being instantly reminded of Jerry Sandusky, the celebrated assistant football coach at Pennsylvania State University who founded a non-profit charity for at-risk youth in order to prey upon children. His conviction on multiple counts of rape and molestation was chronicled in Amir Bar-Lev’s harrowing 2014 documentary, “Happy Valley,” which also took an unflinching look at the anger that swept across campus, triggered not by Sandusky’s crimes so much as the irreparable damage done to the school’s reputation. Chief among the casualties was Joe Paterno, Penn State’s revered paternal figure, who served as the university’s head football coach for 45 years, leading the Nittany Lions to a record-breaking 409 wins. Though he received offers to coach elsewhere for more money, Paterno stubbornly stayed put, thus cementing his local status as a saint.

“Denial is healing for me,” said Paterno’s son, Jay, when faced with troubling allegations regarding his father. Though it remains unclear just how much the coach knew about Sandusky’s abhorrent conduct, the fact that he had knowledge of it is inarguable, and his failure to notify anyone—outside of his superiors—is crushing. “Paterno,” director Barry Levinson’s dramatization of these events, airing this weekend on HBO, lacks the scope of Bar-Lev’s film, yet stands on its own as a potent cautionary tale. The script co-authored by Debora Cahn and John C. Richards frames its narrative around the two-and-a-half months following Sandusky’s 2011 indictment, a period of days that turned out to be Paterno’s last.

Though the film stops short of staging the coach’s final moments, as he succumbed to cancer at age 85, it could be argued that the entire film is, in essence, a protracted death scene. Within a handful of weeks, the legacy of integrity that Paterno had built to be synonymous with his own name came crashing down, smothering Penn State in an avalanche of humiliation. Cinematographer Marcel Rév (“White God”) deftly illustrates how the once-towering stature of this sports legend suddenly became severely diminished, as expressed in a shot of the man walking past rows of empty seats at his cherished stadium. The film opens in equally chilling fashion, as Paterno shuffles down the blinding white corridor of a hospital, his famously razor-sharp mind rendered hazy and directionless. On the soundtrack, we hear snippets of commentators echoing through the man’s memory, one of whom labels him “the godfather.”

This line, of course, carries an added resonance with Al Pacino cast in the titular role. “Paterno” marks the actor’s third collaboration with Levinson as director, the first being another fact-based HBO film, 2010’s “You Don’t Know Jack,” which deservedly earned Pacino an Emmy. The greatness of his performance as Jack Kevorkian, the controversial doctor who aided ailing patients in ending their lives, was in its subdued nature. Though the opportunities for scenery-chewing were plentiful, such as when Kevorkian showed up in court dressed in a wooden pillory costume, Pacino stayed true to the grounded persona of his character, who kept his cool even while facing an outrageous jail sentence. Kevorkian’s flaws were never more apparent than when he made the unwise decision to represent himself in court, yet he was also a noble figure. Viewers fearing that Levinson will take a similarly sympathetic view of Paterno can rest assured that this film is far more merciless in its portrayal of unchecked hubris.

The methods utilized by the coach to keep calm and collected on the field are hopelessly misguided when applied to weathering the Sandusky sex scandal. As family and colleagues attempt to break the news to him, Paterno’s eyes remain glued to the television, a telling sign of how his attention was always consumed with football, so much so that it took years of badgering for him to even consider dating. His penchant for drawing up game plans while listening to opera takes an ironic turn as his final days veer into an operatic tragedy. Only toward the end does his mind seem to register the atrocious repercussions of the witness accounts he willfully overlooked. Up until then, his reactions amount to an indignant shrug clouded in naiveté (he admits not to knowing the meaning of “sodomy” when it is brought up in the charges). After Paterno’s press conference is cancelled, his silence is deemed a confession, prompting calls for his resignation, as lawyers inform him that he’s not disciplined enough to speak before news cameras. When he makes a brief televised statement to students protesting his firing, feebly coaxing them to “pray a little bit for the victims,” his failure to use the platform bestowed to him in any meaningful way is thoroughly maddening.

Pacino’s work here is as wrenching and richly textured as any in his astonishing career. Many of his most shattering moments contain no dialogue at all, such as when Paterno is forced to hear his team lose in their first game since his ousting. For perhaps the first time, he finds himself unable to watch the screen, pressing himself against his bed as he listens to players flailing about on the field, cast adrift without the coach’s guidance that had always sent a ripple effect through the stadium. Yet no matter how much the film invites us to share in Paterno’s agony, it never once portrays him as a victim. A large amount of the screen time is devoted to Sara Ganim (a superb Riley Keough), the Patriot-News journalist who did precisely what Paterno should’ve done—track down the students who were abused by Sandusky and serve as the whisteblower empowering countless others to come forth. Her story on the scandal earned her a Pulitzer Prize, and there are distinct echoes of the Boston Globe reporters’ heroism depicted in Tom McCarthy’s Oscar-winner, “Spotlight,” especially when Ganim receives a call from a victim alleging that he informed Paterno of Sandusky in 1976, and was resoundingly ignored by the coach.

In actuality, this charge came to light two years ago, a revelation that will hopefully silence those members of Penn State still unwilling to treat sexual abuse survivors as anything other than a nuisance. Levinson includes a stirring soundbite from former team president Matt Millen, whose assertion, “If we can’t protect our kids, we, as a society, are pathetic,” was contradicted by his unwavering support for Paterno. While we are currently seeing American youth at their best, shaming adults with their eloquence at March For Our Lives rallies, the Penn State students who fought against the truth by taking part in riots while ridiculing victims represent hateful nationalism at its worst. When Ganim asks for permission to quote students opposed to the demonstration, they refuse to let their voices be heard, if only to preserve their own safety, as their surrounding peers continue to chant, “F—k the media!”

Clocking in at 100 minutes, Levinson’s film does leave you wanting more. We’re only afforded fleeting glimpses of Paterno coaching on the field, smacking players and barking orders while displaying the energy of a man half his age. The endless hours he spent working with Sandusky, and the red flags he may have observed while in the presence of his longtime friend, remain enigmatic. What makes “Paterno” such a disquieting experience is its preoccupation with the cost of denial, and the nightmarish way it can burrow into your subconscious. The monster embodied by Sandusky has taken on many faces in our society, utilizing its power to target those who are vulnerable. In every instance—whether it be the Catholic Church, Hollywood, USA gymnastics or Penn State—there are culpable multitudes who chose to turn a blind eye, allowing this abuse to occur again and again. By prioritizing wins over all else, Paterno endangered the children he loved, even those who were his own flesh and blood. “I spent my whole life trying to make my name mean something,” he tells his son during a heartbreaking monologue late in the film. Indeed, his name now has two meanings, standing as a lasting symbol for both the winningest coach and the biggest loser. 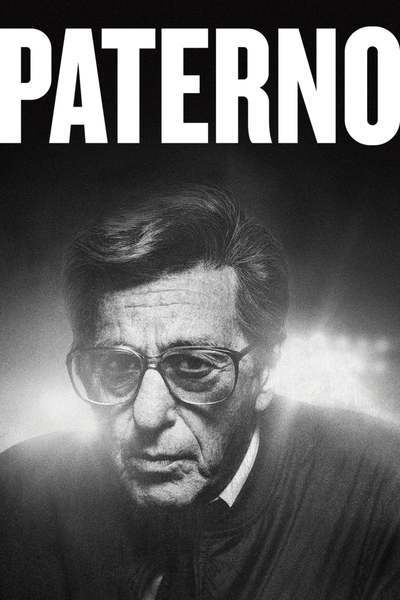