The legacy of “The Godfather, Part III” has largely been reduced to two statements: “It’s not as good as the first two” & “Sofia Coppola isn’t good in it.” Neither of these declarations are false, but they turn what was always at least a solid film into a footnote, something director Francis Ford Coppola seeks to correct with this month’s “The Godfather Coda: The Death of Michael Corleone,” a new version of the 1990 film that’s being released in theaters today and on Blu-ray and VOD on December 8th. The director has a long history of recutting his work with alternate editions of films like with “Apocalypse Now: Final Cut” and “The Cotton Club Encore”. In this interesting endeavor, he hasn’t radically altered the bulk of the film in a way that feels designed to appease critics—his daughter’s performance hasn’t been cut, for example—and yet “The Godfather Coda” does seem different, thanks largely to how he opens and closes the film. Overall, this version feels even more elegiac—a true coda instead of just another part of the same story.

The biggest change that Coppola makes is to get right to the heart of the story, and it's a drastic improvement. Gone is the wishy-washy opening segment of the film that connects it more directly to “The Godfather, Part II,” as this new version opens in Italy with Michael Corleone (Al Pacino) meeting with Archbishop Gilday (Donal Donnelly) to discuss his contribution of $600 million to the Vatican, followed immediately by the after-party. Instead of dragging its feet, “The Godfather Coda” opens with Corleone doing business to legitimize his family and reputation. And then it dives into an extended sequence that mirrors the wedding from the first film, while also getting Andy Garcia’s Vincent involved more quickly. Everyone who really matters is at that party, which happened much later in the original cut. From there, “The Godfather Coda” plays out in ways that will be familiar to fans of the 1990 version. There are tweaks here and there—some notable—but the biggest change to come is the ending, which has been tightened and then cuts earlier with an on-screen quote that I’m not fully convinced works.

“I had a whole different destiny planned.” Even more than the original version, “The Godfather Coda” feels like a film about regret. The oft-quoted line from the film is about “being pulled back in,” referring to the criminal underworld that Michael Corleone is trying to leave behind, but it also refers to the regrets and memories he can’t escape, and the doomed tone of the entire film. The cuts in this version make it feel more somber than I remembered, something reflected in Pacino’s performance (although that could be by virtue of being personally much closer to his age than as a teenager when the movie came out), and that material stands out instead of the admittedly dull stuff about politics, crime, and religion. I found Pacino’s work this time to be among his career-best. The scene in which he confesses to ordering the death of Fredo is stunning, and there’s a bone-deep sense of tragedy that he carries throughout the movie. You can feel the weight of his life on his shoulders. It’s a film about a man constantly fighting the ghosts of his past, whether he’s trying to reunite with Kay (Diane Keaton) or basically dismantling his criminal organization. He's searching for that move that will allow his mind and soul some peace. And yet Michael is also a smart man who knows the futility of some of his choices, especially as he watches his children pull away from him and his business decisions backfire.

The action set pieces in “The Godfather Coda,” like the helicopter scene in Atlantic City and the massacre at the street festival, aren’t the strongest parts of the saga, but there’s practically no one who can ring more character and tension out of a “meeting” than Coppola. The first act of this new version has simply some of his best filmmaking as we’re reintroduced to Michael Corleone as an old man, figuring out for ourselves where he’s at in life through interactions with Gilday, Vincent, and Joey Zasa (Joe Mantegna). There are great performances throughout these scenes too, particularly from Garcia, who makes a much bigger impact in “Coda” by virtue of being essential earlier. Garcia was always very good here—it’s one of his best performances, a great counter to Pacino's work. He almost feels like he would have fit right at home in the original films and has that young Pacino energy.

The truth is that the first two “Godfather” movies tell a complete story. There’s no need for a third, and that's why Coppola avoided making it for years, only succumbing to pressure from Paramount after a few notable financial failures in the ‘80s. And the expectations set by the word “Part” in the title forced comparisons. It never felt like part of the same story. Removing that, making this a “Coda” instead, allows it a different tone. People completely turned off by Sofia Coppola’s performance won’t be swayed by this version, but if you’re someone who defended it or found yourself wondering if it was better than you remembered ... well, it’s definitely better now.

Now playing in select theaters, and available on Blu-ray and VOD on December 8. 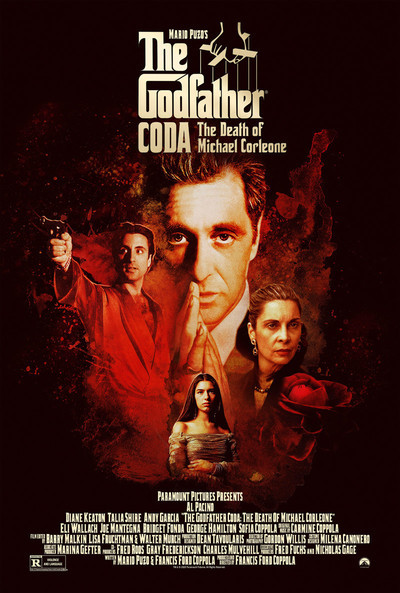 The Godfather Coda: The Death of Michael Corleone (2020)