The Pirates of Somalia

This movie’s title is more than a little cheeky when you consider that the lead character, a young Canadian wannabe journalist who hits on the idea that he can really make a name for himself by courting danger on the other side of the world, barely makes it on board a boat in the picture’s nearly two-hour running time. More accurate would be “The Bro Who Wanted to Get in with the Pirates of Somalia.”

Based on a book by Jay Bahadur, the movie opens in the Great White North. Jay (Evan Peters, coming off like a much less wholesome version of Patrick Fugit in “Almost Famous”) nurses his journo dreams in the basement of his parents’ home (he’s got a poster of “All the President’s Men” on a plywood wall down there), while his younger brother steals his Red Bull and his bro buddies taunt him as they embark on a trip to a local bar called Parrots. After a snow-shoveling mishap, he finds himself in a doctor’s waiting room and learns the crusty old guy in the chair across from him is Canadian journalism legend Seymour Tobin. Tobin is played by Al Pacino in what amounts to a slightly extended cameo; Pacino handles the role in the mode he used when he interrogated Hank Azaria in “Heat.” You keep expecting him to say things like “I’ve got a GREAT LEDE!” But the script, by director Bryan Buckley, never accommodates him in this respect. Instead, he offers pearls such as “You read too much. F**k more girls instead.” After looking at Bahadur’s writing, he offers, “You’re not the second coming of Hunter S. Thompson.”

There’s an interesting subtext in this movie. Despite its ostensible mission to shed some life on Somali culture and the precarious situation of its democracy, the movie is really all about a white guy trying to earn cultural currency in an era when what he represents is on an ever-more hurried wane. Late in the movie, when Jay is introduced to Somalia’s president, that man jokes “You are the next Bob Woodward?” and Jay replies that he always identified more with Carl Bernstein. Jay’s aspirations constantly take him into the past, a past that really IS dead, and getting more dead. The cool journalistic customer chronicling the end of colonialism has less and less place in a world that’s ever more post colonial. There is no hope for a journalistic groundbreaker of the present or future: it is only the recent past that contains viable models.

This is part of the movie’s problem. Aside from it being another how-I-made-out-in-an-“exotic”-locale narrative. The film means for us to delight in Jay’s flouting of conventions. When the little boy who’s befriended him spots the attractive wife of a local kingpin from out of Jay’s window, Jay exclaims, “You’re a good wingman, Assad,” and we are meant to be charmed. The movie does contain some good acting work, mostly from the actors portraying Somali characters; Barkhad Abdi is engaging as Abdi, who guides Jay after he first touches down and advises him to not take up CBS News’ offer of $1,000.00 to anyone who can get hostage footage from a Somali ship. Speaking of which, in one of the movie’s most ill-advised bravura touches, the “piracy” stuff is mostly confined to scenes in which Jay and whoever he’s trying to inveigle for information get high on shared khat (a flowering plant native to Africa that causes a speedy euphoria). So they’ll be chewing on khat and talking, and boom, Notorious B.I.G.’s “Hypnotize” comes on the soundtrack and high-seas attacks are portrayed in neon-bright animation. Because they’re stoned, you see. Like so much else in this movie, it’s not as cute as it thinks it is. 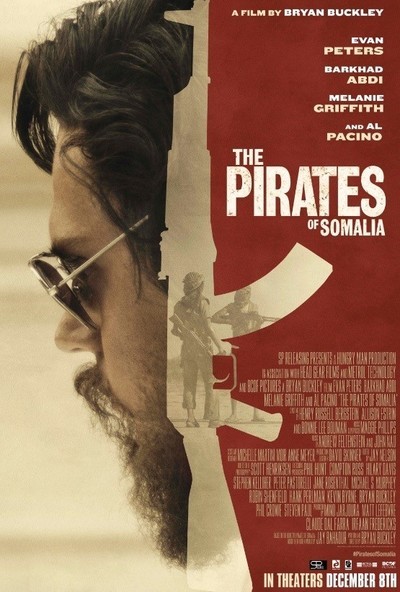 Writer (book "The Pirates of Somalia")