Michael Polish, director and co-writer of "American Traitor: The Trial of Axis Sally" seems more interested in the film's look than its story or characters. Each shot is meticulously framed, with striking, noir-ish lighting to emphasize the nightmarish settings of Nazi Germany and American prison cells. The movie's characters are less compelling, however, and the film never deeply engages the issues of consent, culpability, and justice it asks us to consider.

"American Traitor" is based on the true story of Mildred Gillars (played by Meadow Williams), an American who was living in Germany as the Nazis took power. She worked for the notorious Joseph Goebbels, the Nazi Minister of Propaganda (Thomas Kretschmann) on radio broadcasts intended to undermine the morale of US troops. "I'm only saying these things because I care about you," she would say in a breathy, seductive voice. At first, she encouraged Americans to stay out of the war, telling them Germany is a better ally than England. After the attack on Pearl Harbor, she cautions them about the power of the German armed forces. "What chance do you have?" "It's not too late to surrender." She tells them that while they are getting wounded, their girls will be falling for the men at home. Later, she visits American POWs and reports on their treatment and their messages home, editing them to make them seem well cared-for and to show admiration for the German doctors. The military calls her "Axis Sally."

"The spoken word is the most powerful weapon in the world," Goebbels tells Gillars. "It works best when those being manipulated are confident they are acting in their own free will." A fundamental question in the movie is the extent to which Gillars was manipulated and the extent to which she was acting in her own free will. Goebbels uses both carrot and stick, telling her to "stay with us and learn what victory feels like," while keeping her passport so she cannot leave and forcing her to sign a loyalty pledge.

The film shifts back and forth in time, so we see both her being arrested in Germany after the war and her trial in the US in 1948, interspersed with scenes from her experiences during the war. Instead of building to a deeper understanding through juxtaposition of the past and present, it dissipates the story's momentum.

And then there's Al Pacino. He plays James J. Laughlin, the defense counsel who tells Gillars she is the most hated person in America other than Hitler, and since she is still alive. She angrily insists that he prove she is innocent; he says the best he can do is see that she gets a fair trial. He impetuously brings on an inexperienced co-counsel, Billy Owen (a likable Swen Temmel), whose decency and sympathy on his visits to Gillars' cell finally get her to share more of her story. Owen is the only character whose real-life counterpart appears in archival footage over the closing credits, suggesting that it might be his character the film finds most sympathetic.

Williams' face shows little expression through most of the film, a character choice, perhaps, but it is an obstacle to any connection to her. Pacino's Laughlin is a collection of barks and tics, as though an angry pile of crumpled laundry was summing up to the jury. There is a suggestion that both Laughlin and Gillars believe they will get what they want from publicity, that she will be a mid-century Roxie Hart and he will gain a reputation that will bring him the cases he wants as a litigator, but it does not illuminate their actions. Thomas Kretschmann is suitably heartless as Goebbels, though a sex scene intended to be revealing is closer to parody.

Treason, the trial judge tells the jury, is the crime that inflicts the greatest damage because it attacks a country, not an individual. Laughlin argues that first, it was not Gillars who was delivering these messages but a fictional character reading from a script written by others. And second, he tells the jury, her broadcasts did not undermine morale because no one took them seriously. Third, he argues, she had no other choice. Those who did not do as Goebbels said were sent to concentration camps or killed. So how can she be blamed when the alternative was prison or execution?

That is a good question, one of the foundational existential questions of agency and guilt. But the film observes without providing depth, insight, or even empathy. The beams of light coming through the prison window create impressive images but they are not enough to make the story come alive. 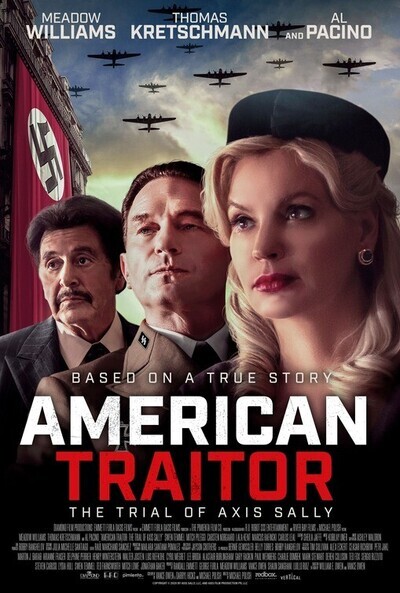