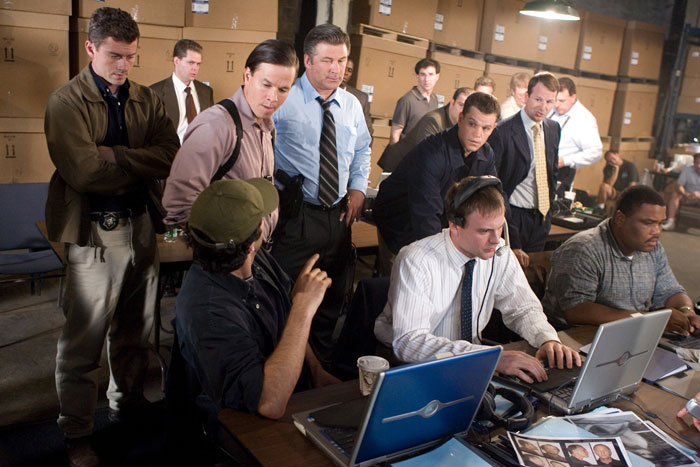 Critics gather 'round to watch "The Departed" on their laptops.

Is there anybody who doesn't want Martin Scorsese to win an Oscar? Even if you don't think "The Departed" approaches his best work? For me, his best films are "Taxi Driver," "GoodFellas," "The King of Comedy" and "New York, New York" (and I'm very fond of most of his others, including "After Hours," "The Last Waltz," "The Last Temptation of Christ" and "The Color of Money") -- and I've written at some length about all of them over the years explaining why I think so. If I had to get hierarchical, I'd probably rank "The Departed" somewhere below "Color of Money" and above "Boxcar Bertha" -- mainly because it strikes me as one of his most mechanical, least personal films. I just didn't get the feeling his heart was in it all that much.

But, so what? Unquestionably, Scorsese deserves recognition from the Academy of Motion Picture Arts and Sciences -- and, as is often the case in Oscar history, he may get it for something that does not represent his finest work. Or even the best of the year. And that's OK. The Oscar doesn't really have anything to do with artistic merit, but Scorsese's a real moviemaker (he thinks in images), a longtime pro, and a movie lover to his core. The Academy should recognize him for everything he's done for movies, not just for "The Departed." (This would be one of those "career Oscars" -- like when Henry Fonda won for "On Golden Pond" -- or Al Pacino for "Scent of a Woman.")

Which brings me to the latest issue of cinema scope (a publication with a web site that's more attractively designed than the print version), in which Managing Editor Andrew Tracy makes an argument about "The Departed" and Scorsese that might be called, oh, I don't know, contrarian, perhaps? Here's the gist:

Do we really need Martin Scorsese? Heresy though it may appear, the question interrogates not so much the man’s work as its reception—and in light of his recent output, the latter is far more interesting than the former. As Scorsese’s ambitions continue to wane in the belatedly careerist, Oscar-seeking course upon which he has set himself, there is a manifest refusal to let him go the way of other filmmakers whose efforts no longer match their ability. Good filmmakers naturally inspire proprietary feelings, but Scorsese has become less a going concern than a public trust, his secular sainthood guaranteed even further by his laudable contributions to film preservation and restoration. At stake here, it seems, is not simply the fate of one director but of the cinema entire—or at least of American cinema, which in this particular discourse amounts to the same thing.

... Hyperbolic overpraise can be a valuable weapon, but if the original Cahiers crew sometimes bent the truth of an individual film in the service of a higher truth, the mostly uncritical canonization of "The Departed" wholly detaches criticism from onscreen evidence. Strident as they were, Truffaut and co.’s polemics had an essentially dialectical spirit behind them. In today’s far more multifaceted, decentralized media landscape, the possessive discourse swirling about Scorsese is little more than a many-throated monologue, and one from which the filmmaker himself has been largely excluded. [...]

In this reading, dynamism, propulsion, and stylistic assertiveness are the very pillars of cinema—never mind the cinema’s equal ability for quietude, stillness, and self-effacing meditation. Never mind either Scorsese’s own frequent ill-fit with the "Mean Streets"-"Goodfellas"-"Casino" axis that has come to constitute this exclusive reading of his work; how does the cool and distanced symmetry of "The King of Comedy" (1983) fit into this model? Or "New York, New York" (1977)? How about "The Age of Innocence" (1993)? "Kundun" (1997)? The filmmaker himself, that is, the choices he makes within each specific film, is moot; it is Cinema itself that speaks through him, and each new film is simply another instance of that essence.

Overdetermined and underwhelming, "The Departed" has that rootless and aimless quality that positively begs for assertive critical performance to compensate for its lack. Like any number of recent “auteur” efforts, from the "Kill Bills" (2003-4) to "Munich" (2005) to even "Miami Vice," "The Departed" is just another disposable masterpiece, serving only to stoke some rhetoric before its fundamental indistinction consigns it to the memory hole.

Advertisement
I don't agree with all of Tracy's examples (especially "Munich"), but I don't think he's just being flippantly contrarian here, either. I've made similar comments about the critical response to "The Departed" (which I felt was rather condescending to Scorsese: "Good boy! Make your mob movies!"). I'm an auteurist at heart: I believe the work of certain artists (whether they're directors, writers, actors, cinematographers, musicians...) is profitably viewed in light of their previous accomplishments. But when do we start seeing only the artist at the expense of the art? That seems to me what Tracy is getting at.

"The question is how close to a personal film can I make in the Hollywood system today - and this ["The Departed"] is as close as I can get. I don't know if there's room for me and the kind of picture I'd like to make anymore....

"I may have to do them independently because I like to take risks, and how can you do that when a picture costs $200 million? There's a lot of money involved and you have a responsibility to the studio." -- Martin Scorsese, 2006