I understand that we’re not owed anything specific by the late-career decisions of artists we once adored. I’ve actually argued against those who have suggested Robert De Niro has hurt his legacy by the films he’s made in the back half of his career. The great works still hold up, and he can do what he wants with his retirement years. He’s earned it. However, when a great performer sleepwalks his way through a movie, barely putting in the effort of a mannequin that were put in his place, he has not earned being free from criticism in that specific case simply because of how good he’s been in the past. Which brings us to “Hangman,” a cheapo “Seven” knock-off that one would be tempted to suggest is beneath the talents of everyone involved, but they knew what they were getting into when they read it.

This is a film that opens with Al Pacino’s hang-dog cop getting sideswiped, going on a poorly-filmed high-speed chase, and then pulling a gun on the driver despite the urging of those around him to be careful because he may have a bomb. “Sunovabitch just ruined my car,” he responds. It doesn't get smarter from there. It’s the kind of script that allows an Oscar winner to say “Serious fuzzy feather sticking out of my ass.” (Come to think of it, that may actually be in the Plus column.) Most of all, it’s the kind of ridiculous serial killer movie that makes zero sense when one thinks about it for over a second. I don’t mind the occasional wild leap in logic, but this one requires too much jumping, and Pacino and I are just too tired.

The silliness starts when a New York Times reporter named Christi Davies (Brittany Snow), who mentions she was nominated for a Pulitzer lest you think this is a little silly, comes to do a story about the police because, ya know, things have been strained between officers and the public lately. OK. On orders of the captain (Sarah Shahi), she’s given complete carte blanche ridealong status with a surly officer named Ruiney (Karl Urban). In a bad movie, the “Star Trek” actor is easily the best thing about “Hangman.”  He’s got that square jaw plus bone-deep exasperation formula that works for the genre, and I wish he’d do an actual noir sometime soon that took advantage of the fact that he looks like someone who would have been a star in the '40s.

Back to this nonsense. On the same night Christi gets to the station, she goes with Ruiney on a case straight out of a James Patterson novel. There’s a body hanging outside an elementary school with a large ‘O’ carved in its chest, and two mannequins inside looking at a chalkboard, on which an incomplete game of hangman is scribbled. Carved into the desk is Detective Ruiney’s badge number as well as, you guessed it, the badge number of Pacino’s retired Detective Archer. Before you can say “huh, that's weird” the trio is off on a serial killer chase that would make John Doe say, “this seems a little like overkill.” The most bizarre serial killer case in America in years is apparently being investigated by one cop, a reporter, and a retired detective. OK then. Speeding trains, pig heads, stolen blood—the one that keeps “Hangman” watchable is it’s so ridiculous that you almost have to admire the insanity.

Almost. By the final act’s heated goofiness, I had long given up on seeing a glimpse of Pacino’s true skill underneath the straight-to-DVD screenwriting quality. He simply doesn’t care about anything that’s happening here, as evidenced by his blank expressions and an inconsistently bizarre accent that sounds a little like he's from New Orleans at times and other times just like a riff on the mumbling later days of Marlon Brando. It’s just one indication of how little the actor cares about what he's doing here. And, if he doesn't, why should you? 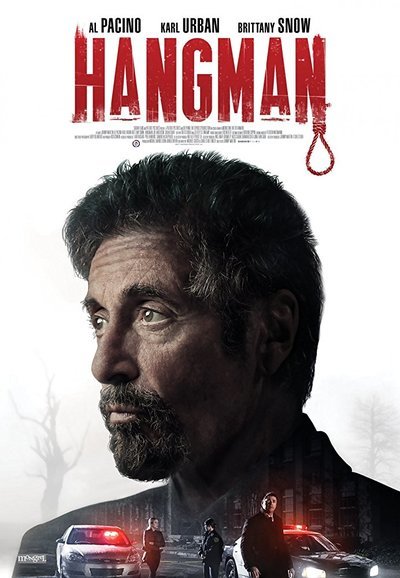