Gliding smoothly from American blockbusters to personal projects in his home country of Spain, Antonio Banderas has become a household name around the world, ending the 2010s with the best reviews of his career for Pedro Almodovar’s “Pain and Glory.” Reuniting with the filmmaker who broke him, Antonio Banderas finds a way to tap into a very personal vein of storytelling in Almodovar’s film in a way that no one else could replicate. At the end of 2019, he was starting to win awards for his work, including Best Actor from the New York Film Critics Circle, on his way to a hopeful Oscar nomination.

José Antonio Dominguez Bandera was born in Malaga, Spain on August 10, 1960 to a police officer and a schoolteacher – he also has one brother named Francisco. A broken foot kept him from his dream of becoming a football player, and so he pivoted to the arts, doing strong enough work in regional productions that he graduated to a gig at the Spanish National Theatre. He caught the eye of a young filmmaker named Pedro Almodovar, who was prepping his debut feature, a film called “Labyrinth of Passion.”

The most essential working relationship in the career of Antonio Banderas was founded from that debut production. Antonio Banderas would star in 1986’s “Matador,” 1987’s “Law of Desire,” and 1988’s “Women on the Verge of a Nervous Breakdown,” earning increasingly better reviews for each project. This upward trajectory continued into Almodovar’s most controversial work, 1989’s “Tie Me Up! Tie Me Down!” 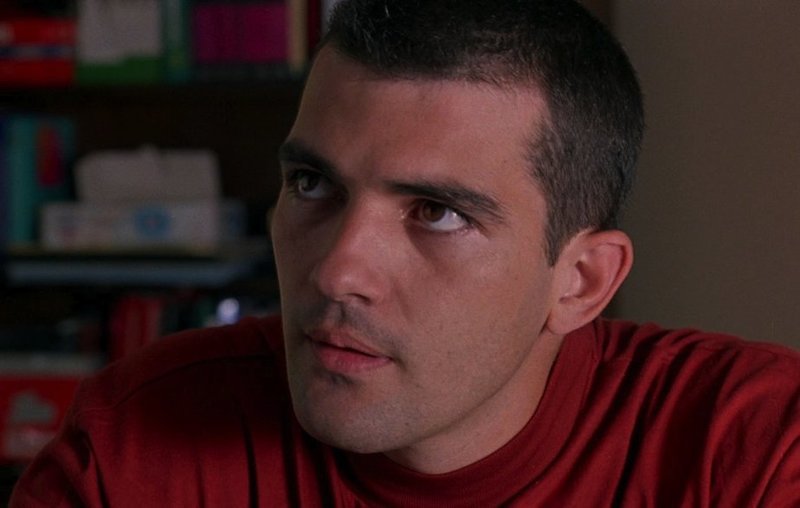 The success that Antonio Banderas had with Pedro Almodovar encouraged him to make the jump to Hollywood, even though his English was not yet particularly good. His first American film was technically “The Mambo Kings,” although most American audiences probably first remember him as the lover of Tom Hanks’ AIDS-infected character in the Oscar-winning “Philadelphia.”

From there, Antonio Banderas really never faded from the spotlight for the next quarter-century and counting.

Major films in the 1990s included Neil Jordan’s “Interview with the Vampire,” Robert Rodriguez’s “Desperado,” Richard Donner’s “Assassins,” and the adaptation of “Evita” with Madonna, who reportedly had a one-sided crush on the actor. He found blockbuster success in “The Mask of Zorro” and “The 13th Warrior” to end the decade.

In the 1990s, Antonio Banderas made a lot of headlines and made red carpets more interesting when he started dating and later married Melanie Griffith. The two have a daughter and he directed Griffith in 1999’s poorly-reviewed “Crazy in Alabama.” Until marrying Griffith in 1996, Banderas had been married to Ana Leza since 1987. He divorced Griffith amicably in 2015. 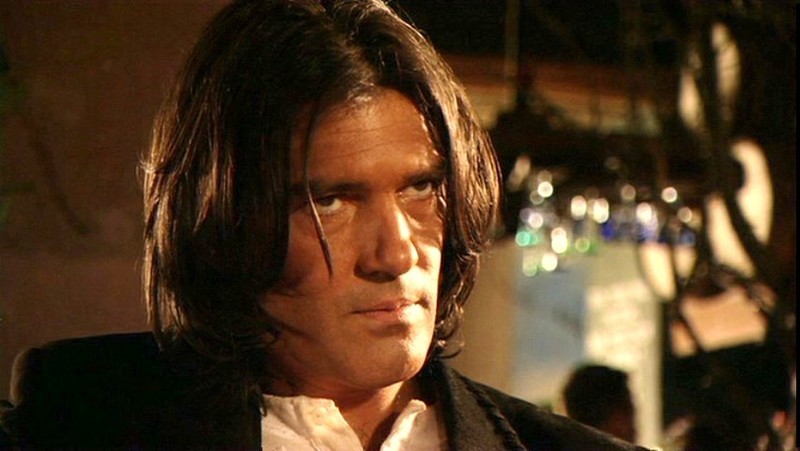 Antonio Banderas reunited with Rodriguez for “Spy Kids” and “Once Upon a Time in Mexico” in the ‘00s, but he never stopped working with challenging auteurs such as Brian De Palma (“Femme Fatale”) and Julie Taymor (“Frida”). Like any actor taking so many roles, a few bombs would dog him in this era, like “Original Sin” with Angelina Jolie and the infamous “Ballistic: Ecks vs. Sever,” one of the most critically reviled films of all time.

Antonio Banderas received some of the best reviews of his career for the Broadway revival of “Nine,” taking a role that was originally played by Raul Julia and getting a Tony nomination in the process.

Most kids, at least the ones who don’t watch Almodovar or Zorro films, probably know Antonio Banderas as the voice of Puss in Boots in the “Shrek” franchise, and his own standalone movie.

After receiving a star on the Hollywood Walk of Fame, Antonio Banderas reunited with Almodovar for their first film together in over two decades, 2011’s “The Skin I Live In,” recasting Banderas in a darker role than the heroes he had been playing in Hollywood for the last 20 years. The result was some of the best reviews of his career, and the response to it likely led to the resurgence for the actor in terms of getting quality roles in the ‘10s.

Highlights of the ‘10s include Steven Soderbergh’s “Haywire,” a reunion with Almodovar again in “I’m So Excited!,” Terrence Malick’s “Knight of Cups,” another Soderbergh film in “The Laundromat,” and a run on the acclaimed series “Genius,” in which Banderas played Pablo Picasso, and earned an Emmy nomination for the role. 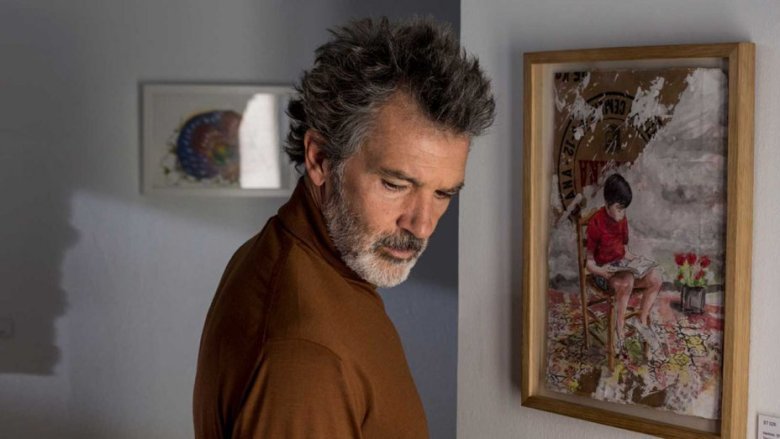 The decade ended with what is widely considered the best performance of Antonio Banderas’ career. Almodovar’s “Pain & Glory” is a deeply personal film and the actor with whom he has collaborated the most finds an emotional register that other actors couldn’t possibly tap. And he works again with Penelope Cruz, another star likely not as bright if Almodovar hadn’t cast her early in her career. He won Best Actor at the Cannes Film Festival for his work.

One of the themes of “Pain and Glory” is the actual physical pain that often comes with old age, and Antonio Banderas brings personal experience to that element, having had a tumor removed from his back in 2009 and suffering a heart attack in 2017. Since revealing that, he has had three stents implanted. He seems to have actually gained new purpose since the heart attack, telling Fresh Air, “It just gave me a perspective of who I was, and it just made the important things [go to] the surface. When I say this, people may just think that I'm crazy, but it's one of the best things that ever happened in my life.”

As of this writing, Antonio Banderas had a number of fascinating, major projects in production, including a film about the life of Ferruccio Lamborghini, and major potential blockbusters like “Dolittle” with Robert Downey Jr., “The Hitman’s Wife’s Bodyguard” with Ryan Reynolds and Samuel L. Jackson, and Marvel’s “The New Mutants,” the actor’s first foray into the MCU.

Antonio Banderas also works hard to bring his success back to his home country, and not just by continuing to star in films produced there. He invests in products made in Spain, and even owns half of a winery there called Anta Banderas. He is a brand representative for a major Spanish perfume company called Puig and has promoted a lot of their products for years.

The SpongeBob Movie: Sponge Out of Water (2015)

A look at many of the narrative features that premiered at this year's Tribeca Film Festival.

A look back at the Santa Barbara International Film Festival.

A tribute to the legendary author of Interview with the Vampire.

A tribute to the late, great Richard Donner.

The latest on Blu-ray and streaming includes The Addams Family, Pain and Glory, and Gemini Man.

The best films of 2019, as chosen by the staff of RogerEbert.com.

The Truth Will Out Eventually: The Laundromat Writers on Turning Global Financial Fraud into A Sharply Comic Wild Tale

An interview with screenwriter Scott Z. Burns and author Jake Bernstein about The Laundromat.

A preview of Friday's Ebert Symposium panels on Diversity in Journalism and National Hispanic Heritage Month.

A news report on the inaugural TIFF Tribute Gala.

Dr. Stacy L. Smith Will Be the Keynote Speaker at the Second Annual Ebert Symposium, Creating an Inclusive Cinema and Media Ecosystem

An article about the second annual Ebert Symposium, "Creating an Inclusive Cinema and Media Ecosystem," scheduled for Friday, September 27th at the University of Illinois in Champaign-Urbana, Illinois.

An overview of twelve films in the 2019 Venice Film Festival that get my thumbs-up vote.

Ben Kenigsberg predicts "Portrait of a Lady on Fire" will win the Palme d'Or.

Cannes 2019 Video #4: Pain and Glory, A Hidden Life, Portrait of a Lady on Fire and More

A fourth video dispatch from Cannes 2019.

On two competition films from Cannes 2019.

A preview of the 2019 Cannes Film Festival.