The unbelievable true story of 33 Chilean miners who survived in a collapsed mine for 69 days gets a Hollywood telling in director Patricia Riggen’s “The 33,” opening this Friday. Antonio Banderas stars as designated leader Mario Sepúlveda, who helped the men ration their food and stay focused during their time trapped in darkness and sweltering temperatures. He joins Lou Diamond Phillips, Mario Casas, Juan Pablo Raba, and Oscar Nuñez in their recreation of the time a brotherhood was formed under life-threatening circumstances.

Above ground, the world was captivated, and people camped out near the mines to be close to their loved ones. While international efforts were made to properly access the cave (shown here in performances from Rodrigo Santoro and Gabriel Byrne), families and friends waited anxiously for any positive word. Representing those who experienced this emotional roller coaster are the likes of Juliette Binoche (whose brother is played by Raba) and Cote de Pablo, playing the pregnant wife of Casas’ miner Álex Vega.

The Chilean-born actress graduated from Carnegie Mellon University with a degree in musical theater, and five years later was cast in “NCIS” to play character Ziva David, joining an ensemble that created what’s regarded as the world’s most-watched TV drama. De Pablo spent eight years working on the series, and now appears in her first big studio film project, “The 33,” which brought her back to Chile for on-location shooting in the nation’s Atacama Desert.

RogerEbert.com sat down with de Pablo to talk about her experience making “The 33” with Riggen, how working on the tight shooting schedule of TV prepared her for an emotionally concentrated film role, her perspective on talented women in Hollywood, and much more.

Did you follow these events closely as they were happening? What was your own personal experience with them?

I’m Chilean, so it really hit close to home. I was working really crazy hours—episodicals are not an easy thing to do—and I think I was home when the first [miners] were coming out, I think it was nighttime, if I’m not mistaken. So it went from nighttime to morning because it took a long time. So I saw the first, the second and the third [miners] come out and I remember I was just a mess! It was an incredible thing, and the world was glued.

When filming the scenes with the family camps and then the miners, how did that work schedule-wise?

They were shot as two different entities. Meaning, the things that were shot in the cave were shot the first two months in the movie, were shot in Colombia, and that’s all the men, only. So when I talk about “The 33,” I sort of talk about two different movies. There was a movie that was shot in the cave, and that happened in Colombia. And there was a movie that was shot in Chile, and that happened with all of the people above the line. By the time that the men got to Chile, they were pretty much done with their movie, certainly. And then they had all the stuff that happened when they got out, and when they were rescued, and going into the mine. But all the mine stuff was shot in Colombia. And they were actually put through a rigorous dietary plan, where they had to lose weight. For them, it was a miserable experience. They were on a diet, they were cold all the time having to pretend that they were really hot, they were shooting in Colombia and staying far away from the really hip places, they were lonely and away from their families, they were going through the emotional roller coaster. And you actually see a couple of incredible performances. Lou Diamond Phillips, is to die for. Juan Pablo Raba, he’s to die for! You see some performances that are really gorgeous. Some moments Antonio has are really beautiful. There’s vulnerability in it, and I think a lot of that is Patricia.

When filming the scenes with the camps, how did Patricia Riggen get you guys in that very personal mindset?

You know, I think that’s one of her biggest talents. I think Patricia’s really good at communicating what she wants, and primarily she does it. she certainly did it with me. She’d kind of come very close, and she’d walk towards you and then, she’s very open, her heart is very open. And so she’ll grab your hand and look into your eyes and she’ll say, “This moment is a very tough moment, you’ve lost all hope.” By the time she’s done talking to you, you’re emotionally there. You kind of feel like going, “Start rolling! I’m gonna lose it! Patricia come back, come back!” To me, I’m not the kind of actress that’s like, [in a nasal voice] “Look kids, this is what’s happening. Your husband’s dying, and blah blah blah.” She gets everything really quiet, and then she starts taking you very slowly through the process of loss and understanding what that is. By the time you’re shooting, you’re fully emotional, and you’re a wreck. And I give her credit for that. 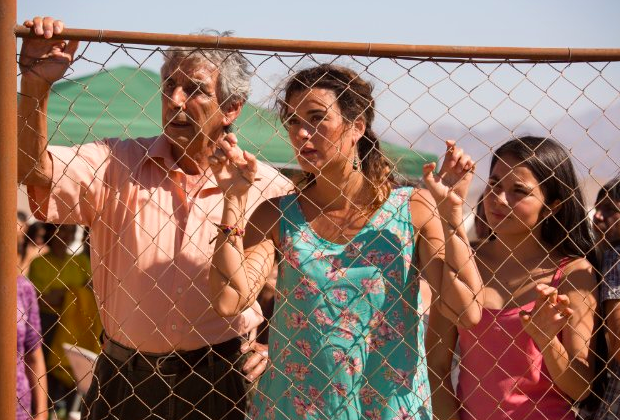 That closeness seems like something that would be very special for any actor.

To me, that’s one of the things I saw, working with somebody like that. I love working with hands-on directors, I love knowing that somebody can come up to you and pull you aside. Dissecting the moment is something that I think is a luxury. Where I was coming from, it was, “Go, go, go, go. We’re running out of light, we need just one more take.” You usually don’t have the luxury of exploring the moment.

Did your experience with the fast schedule of "NCIS" prepare you for these emotionally compact moments in “The 33”?

I think “NCIS” was an incredible school. It was at times very tough, it was probably always very rewarding, I was working with a family and while I was there we never shot anything if we didn’t understand it. So it wasn’t just like, “Memorize and say the lines.” When I was there, there was never a moment where I felt like we were phoning it in. It was a well-oiled machine, and people loved the dynamic between these characters. But I think if anything, it just prepared me. There’s nothing like being in front of the camera every day of your life. It’s incredible. And on top of that, I was playing a character that I loved, and it was a really popular show internationally speaking, so I couldn’t ask for anything more.

As someone who was in the show, what do you think that people really responded to about it?

I think a lot of it had to do with the dynamics between these characters. It’s not so much that the formula works, everybody knows the formula works. But I think when the show first came out, it was really about some eccentric personalities. And they were so well-defined, and created by Don Bellisario, who’s really good at creating characters. I had the good fortune of showing up while he was still there. I was able to have a couple of years where I was able to develop the character with him. And I always wanted to make the character accessible, to women. Meaning, I didn’t want her to be like this Hollywood thing where she’s always perfect. I fought very hard for her to have at times messy hair, not done perfectly well. Because that was the real thing. Now, did it help me in the industry? Maybe not. [Laughs] Maybe people were like, why is her hair looking like that? It was important for me to have women relate to the character.

With that being said, if you look at “The 33” it’s a studio project, directed by a woman, about Latin Americans. Do you think things have gotten better in regards to sharing diverse perspectives in the mainstream?

I think the more you shed light to the issues that out there, and I do mean for example, inequality between men and women, the more things are going to be resolved. So the more you talk about studios giving opportunities to women, it’s not so much giving opportunities any more it’s just about hiring women, period. Talent doesn’t come in a box where it says male or female. Talent is talent, it can come in any kind of a box. And I think that should never be overlooked. 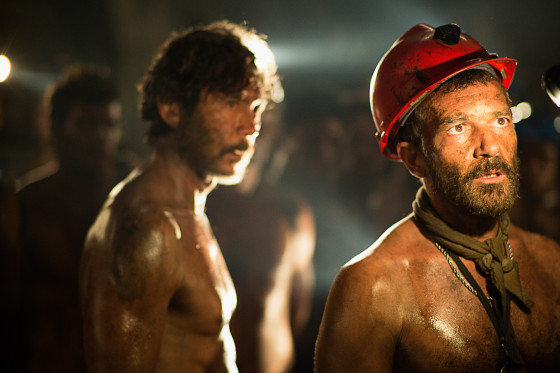 Did working with Patricia Riggen make you question in particular why there aren’t more women working with more studio projects of this size?

When I heard Patricia was doing this movie, I thought, “Oh, really cool. A woman director.” We didn’t have many of those on “NCIS.” We had like one. So for me, this was a treat on many levels. I got to work with pretty remarkable women, but I never see things like, “Great, a woman director, hear me roar!” I take it that it’s a given. That’s a woman, she can do it, great. I don’t really put much thought into it. However, I think it would be irresponsible of me to ignore the fact that it’s not like that, that there is inequality, and we are hopefully doing everything we can to make that better. And that really comes down to choices. Being public about certain things, and shedding light and awareness. Those are some of our responsibilities as men and women. We’re both fighting for it.

How do you feel you’re shedding light to this?

I think, even this, talking about, even you asking the question is a valid way. Do I see it in Hollywood? Absolutely. Now more than ever, in the past year and a half it’s become a big thing. You’ve got Jennifer Lawrence talking about it openly, you’ve got actors like male actors taking a stand and saying a thing like, “I’m going to go open with my salary so women can negotiate.” And I think that’s beautiful. I think that’s a very selfless act.

The weekend after this interview, three big movies came out and didn’t do very well (“Our Brand is Crisis,” “Burnt” and “Scouts Guide to the Zombie Apocalypse.”) Meanwhile, while this is a great age for TV, but it’s a very populated field. Which one are you looking more towards now that you’ve done a studio project, and are done with “NCIS”?

I don’t think you can approach any work thinking about the outcome or the success of it, because if you do then you’re result oriented. You hope for the best, but if I were to take a job because I knew it was going to be a hit, then you’re not really doing your creativity a favor, because you have to follow your gut. In this case, you have to follow your heart and you have to try to be the best artist you can be. There are a lot of factors that may not translate to money and they may not translate to success, but they may translate to a creative freedom which may lead to incredible happiness. I am in a fortunate position. I did a TV show for a very long time, and so I have the time and the freedom to explore things that are out of the box right now. And not many people have that, and I feel incredibly blessed.