It's hard to know what, exactly, went wrong here. The concept is fine, even the adaptation is fine: eccentric doctor who can talk to animals goes on a series of madcap adventures! Sure! Nothing wrong with that! Hugh Lofting's popular children's book series, published in regular intervals during the 1920s and '30s (with a couple of books of previously uncollected stories appearing posthumously), has been adapted many times before, for film, for television, animated, live action, etc. The "property" has been its own little franchise for a century now. But "Dolittle," with Robert Downey Jr. in the eponymous role, is a wild whirlwind of a mess, without any coherence, without even a guiding principle. Maybe the problem is that director Stephen Gaghan is known mostly for "Syriana," as well as writing the screenplay for "Traffic," and so he would not be the most obvious choice to helm a light-hearted mischievous romp—like "Dolittle" is so clearly meant to be.

At the start, Dolittle is holed up in his mansion, unable to recover from the death of his wife, lost at sea during one of her expeditions to the remote corners of the world. (This is shown via animated prologue, with voiceover by Emma Thompson, who plays Polynesia the parrot.) Now a hermit, with long straggly beard, Dolittle spends his days hiding from the world, chattering away with his animal friends, a duck, a polar bear, a gorilla, an ostrich, etc. (voiced by Kumail Nanjiani, Rami Malek, Selena Gomez, Octavia Spencer, Craig Robinson). His exile is interrupted by two visitors who show up on the same day (in a sloppily handled coincidence): Tommy Stubbins (Harry Collett) bears a wounded squirrel to Dolittle's door, and Lady Rose (Carmel Laniado) summons Dolittle to the Palace to help save the ailing Queen Victoria. If Dolittle doesn't help the Queen, then the land on which his manor sits will be taken away from him, and his menagerie dispersed right in the middle of hunting season. After examining the Queen (Jessie Buckley), Dolittle suspects she is being poisoned by her sinister ministers (Jim Broadbent, Michael Sheen). The only antidote is in the blossoms off the Eden Tree, found on only one island, so he and his merry band of mammals sail off into the ocean to retrieve it, hopefully in time to save the Queen. The ship stops off at an island known to be inhabited by bandits, led by Antonio Banderas, who also has a vendetta against Dolittle. The plot thickens. And thickens again.

Certain scenes are so confusingly shot, and put together so haphazardly, that watching it is, at times, like floating in a sensory-deprivation chamber, where up is down, or down is over there, and voices come at you in disorienting surround-sound. "Dolittle" feels like someone tossed a bunch of random scenes into the air, let them fall onto the ground, and then tried to connect up the fragments through weirdly looped dialogue that seems to be emanating from a recording studio halfway across town. It's not clear which animal is speaking when, and it's also not clear where any given voice is coming from. Every voice, including Downey Jr.'s, has this strange disembodied quality, like there's a small space around it, each voice in a little separate pod. Since the majority of the film is group scenes, with a lot of chattering dialogue coming from many different sources, this results in a feeling of almost total dissociation. The animals are mostly computer-generated, too, which adds to the feeling of unreality.

The 1967 musical version, starring Rex Harrison, was a legendary flop, so much so it's now seen as one of the death knells of the long overdue collapse of Hollywood's bloated studio system. Watching it now is a surreal experience. All you can see is all that money just pouring down the drain. In 1998 and 2001, respectively, Eddie Murphy starred in two versions, and they were goofy and sometimes gross and kind of sweet, too. Just what the doctor ordered. "Dolittle" doesn't manage to hit any of those easily-hittable marks, although it tries. Michael Sheen is legitimately funny in his impotent blustering villainy, and the squirrel with the soul of a paranoid SEAL commando is also funny. A "bit" with an observant squid had potential.

"Dolittle"'s post-production was troubled and turbulent, with other directors brought in to do last-minute surgery (if you believe the reports), and three weeks' worth of re-shoots. That speaks to pretty severe problems. The release date was pushed back for months (usually an ominous sign). None of this would matter, though, if the confusion didn't show so clearly on the screen. 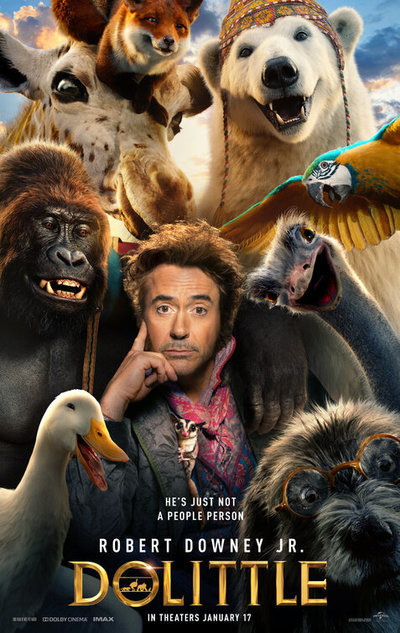 Rated PG for some action, rude humor and brief language.