“Gun Shy” is an action-comedy starring Antonio Banderas that is lacking only action, comedy and a performance by Antonio Banderas that is anything other than a complete embarrassment. At least with a good number of bad movies, you can sometimes see what they were attempting to go for and then analyze where and how they went wrong. In the case of this film, not only does it not work by even the most basic of entertainment standards, it is impossible to grasp what the result might have been like if it had actually worked, unless it was meant to be a part of an experiment designed to make 92 minutes seem as if they are lasting forever.

Banderas plays Turk Landry, the one-time bass player for the popular heavy metal band Metal Assassin (whose big hit is the deathless classic “Teenage Ass Patrol”). He left the group years earlier to marry his supermodel girlfriend, Sheila (Olga Kurylenko). Now living in near-seclusion in Malibu, the dissolute Turk spends his days doing little more than guzzling beer—he doesn’t make music, he barely notices Sheila, and when a news report comes on making fun of him and referring to Sheila as Metal Assassins’s “Yoko” (presumably because she is also a smart businesswoman and a talented artist), he is so lazy that he has to bring in a couple of guys to hurl the TV into the swimming pool. Although Sheila does manage to spur him into getting off the couch to accompany her on a vacation to his birthplace of Chile (though he tries to pretend he is really from England even while retaining his normal accent), she cannot get him to go along with her on a sightseeing tour. Her group is subsequently kidnapped by pirates and when they realize who she is married to, they demand a million-dollar ransom for her return.

It soon becomes apparent that Sheila is in no real danger—her kidnappers admit that they have only been pirates for about nine hours and she finds herself educating them on such things as basic seamanship. For Turk, however, things are somewhat more complicated on his end. He has the million and is more than willing to relinquish it in exchange for Sheila, but first he is unable to get a hold of his manager to send the cash, only low-level employee Marybeth (Aisling Loftus). She gets him the money, but by this time, an ambitious U.S. government stooge (Mark Valley) gets wind of the kidnapping and tries to use the situation as a step towards career advancement by promoting it to his superiors as an act of terrorism and refusing to allow Turk to make the ransom payment by claiming that doing so would violate the Patriot Act. Much wackiness ensues as a vaguely resurgent Turk, along with Marybeth and a randy hostage recovery expert (Jesse Johnson) try to figure out how to get to Sheila and the pirates to make the trade while the government goon goes to increasingly desperate and violent lengths to prevent that from happening.

Bearing all the hallmarks of a screenplay that has been justifiably sitting on a shelf for a long, long time before inexplicably being dusted off and put before the cameras—it feels like a substandard action comedy from the early 1990s with jokes about Amazon and Facebook awkwardly stuck in at random to make it seem slightly fresher—“Gun Shy” somehow manages to come across as being both screechingly over-the-top and desperately, painfully dull at the same time. The script by Toby Davies and Mark Haskell Smith is absolutely awful—even by dumb action comedy standards. The story is a mess, the jokes are ghastly, and the characters are pretty much slackwits and dullards across the board. Director Simon West is all thumbs here as well. The comedy scenes are not funny, the action scenes are not exciting and the one big attempt to blend the two, an extended fight sequence in which numerous innocent people are tased and a guy with a shellfish allergy repeatedly has shrimp rubbed in his face and eyes, is as ugly of a would-be set-piece that you will see this year.

Considering that “Gun Shy” is a film that must have seemed without promise or hope even in the screenplay stage, you have to wonder what could have possibly induced Banderas to sign on to appear in it. My guess is that he saw the first couple of pages, read that he was going to be playing a gone-to-seed rock star and agreed to do it right then, before reading the rest and finding out that he would be spending the majority of the film sitting around and doing virtually nothing while wearing a goofy-looking wig and wouldn’t get to get in touch with his inner rocker until a musical number during the end credits that give the proceedings the only shot of discernible energy. (For a film that has little story to speak of, it has so many different scenes taking place during and after the end credits that they should rename it “Marvel's Gun Shy.”) Until then, he just spends his screen time acting like an idiot while looking mortified at the inanities he has been asked to enact. 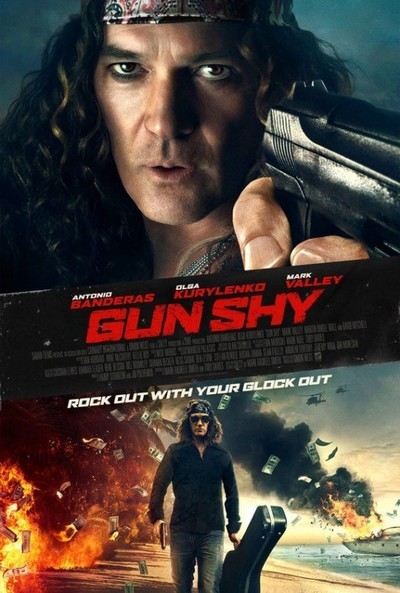 Rated R for language, some sexual content/nudity and drug material.