Had director Steve James replaced the brief shot of topless women with hundreds of men being machine-gunned to death, “Life Itself” might have gotten the PG-13 rating “The Expendables III” hilariously brandishes. To quote The Waco Kid, Sly Stallone and his band of merry old action stars “kill more men than Cecil B. DeMille,” yet somehow this is more kid-friendly than bare breasts. In fact, no one in “The Expendables III” takes his shirt off, presumably because Terry Crews’ obscenely massive pecs alone would almost guarantee an R.

It is genuine farce to follow the gore-soaked prior installments of this franchise with one where people manage to get shot 72 million times yet never lose an ounce of blood. Throats are slit and villains are impaled on impressive-looking cutlery with suitably gruesome-sounding effects, yet the bodies may as well be filled with air or Lucky Charms marshmallows. When one considers that “The Expendables III” plays as a torch-passing from my generation of action fans to the current generation, that PG-13 is an old man’s sly jab at the toughness of young whippersnappers. The audience for the first "Expendables" grew up on the hard-R brutality its stars dished out in the '80s and early '90s. Once the younger actors of today get tossed in the mix, the series suddenly takes a kinder, gentler approach to its extreme violence.

This has to be an intentional wink from Stallone and his contemporaries. They know their days are not only numbered as action stars, but probably should have ended long ago. It’s no longer just about old-school smashmouth displays of force in today’s actioners. Tech-savviness is the new black. As crazy as this sounds, this isn’t a hypothesis crafted from thin air; it’s actually the plot of “The Expendables III.”

Barney (Stallone) hires a new, younger crew after his usual cronies botch a mission. Barney feels his old band of brothers have given enough to the Expendables, so he retires them. Part of the change of heart stems from Barney’s realization that Stonebanks (Mel Gibson), a man he once thought he killed, is the target of the botched mission. Stonebanks shoots Caesar (Crews), sending Barney on the guilt trip that leads to his disbanding of the team.

After demanding that his crew enjoy the rest of their lives, Barney embarks on a suicide mission with his younger charges, all of whom are skilled not only in combat but also in those computer thingees Barney just doesn’t understand. Of course, the new kids on the block manage to get kidnapped by Stonebanks, forcing Barney to call his old team back into action. This is a glorious pander to my middle-aged brethren.

We’ve come to the part of the review where I’m supposed to justify my favorable rating by telling you to “turn your brain off” in order to enjoy “The Expendables III.” I’m not going to do that, because that’s an insult to you, me and the movie. Instead, I want you to pay close attention to “The Expendables III“, because if you’re on its wavelength, you’ll discover an incredibly self-aware streak of obsessive compulsion running through it. When it comes to nostalgic detail, this is a Russian nesting doll of a movie. Allusions beget deeper allusions, tying the levels together in an almost endless game of “Six Degrees of Action Movie Separation.” There’s a Marvel Universe-sized dollop of slavish devotion for fans of Stallone, Schwarzenegger, Statham and Gibson.

For example, Antonio Banderas co-stars as Galgo, a candidate for Barney’s new crew. Banderas and Stallone last appeared as antagonists in the Wachowskis’ “Assassins”. Rather than recreate that character, Banderas instead plays a cross between Puss ‘n Boots and Joe Pesci’s Leo Getz character from the “Lethal Weapon” series. Gibson repays the favor by repeating a line from Banderas’ “Desperado.” In the climactic action sequence, Gibson also gives viewers the chance to see Riggs from “Lethal Weapon” battle Rambo for the belated title of “Craziest Tough Guy: ‘80s Edition”.

Schwarzenegger repeats catchphrases from “Commando” (“I lied”) and other movies, while Wesley Snipes makes his entrance on a literal money train (minus Woody Harrelson) before reuniting with his nemesis from “Demolition Man.” Even that PG-13 evokes memories of the rating on the third installment of the R-rated Mad Max series (starring Stonebanks himself). Practically every line and every combination of the older Expendables characters evokes this type of connection, and the movie knows it’s doing so. That contributed greatly to my good time.

If you choose not to get trapped in the movie’s spider web of nostalgia, there are still pleasures to be had. Gibson sinks his teeth into his big villainous monologue, and seeing him with his mouth taped is sure to inspire applause. Snipes gets a good joke about tax evasion and several action scenes to remind us that we should “always bet on black.” There’s charming chemistry between Statham and Stallone, and a helicopter-flying Harrison Ford shows up to use the type of language Spielberg and Lucas wouldn’t let him use as Han Solo nor Indiana Jones.

The younger Expendables are given the Muppet Babies treatment; they’re portrayed as mini-versions of their original counterparts. Standing out from this bunch is MMA fighter Ronda Rousey who displays a leadership quality that aligns her with Barney despite her stereotypical entrance fighting several men while dressed for maximum hotness. I hope I live to see the day when a woman open a six-pack of Whup-Ass while decked out in curlers and furry Mommy slippers rather than a miniskirt and heels.

As dopey and bloodless as the action sequences are, they keep the film moving at a brisker pace than its 2-hour-plus running time indicates. The film culminates with a scene so preposterous that, if it is indeed Stallone’s swan-song in the action movie genre, it’s a worthy exit. We’ve seen hundreds of instances of heroes outrunning Joel Silveresque fireballs. Stallone outruns an entire building as it collapses from strategically placed bombs. It’s no spoiler that he survives, but after this, there’s nothing left to prove and no place to go but down.

Unlike most film series, “The Expendables III” sows the seeds for its own youthful reboot. Let’s hope “The Expendables 4” is filled with “Rocky III”-style montages of Stallone and company imparting expertise before riding off into a calm, explosion-free sunset. This series has run out of nostalgia to coast on, but what a final burnout it had. 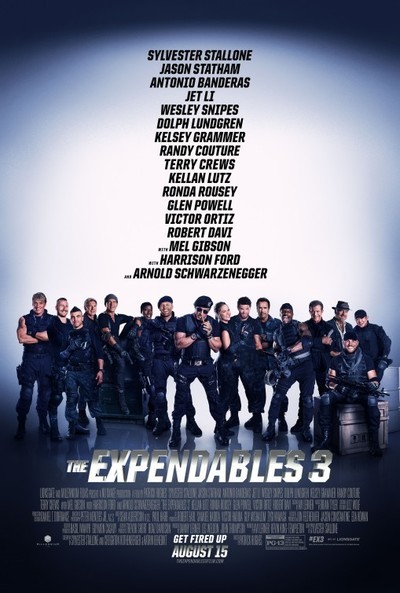 Rated PG-13 for violence including intense sustained gun battles and fight scenes, and for language