An airborne comedy of fear and desire, "I'm So Excited!" takes place almost entirely on a transatlantic flight from Spain to Mexico, forced to go off course due to a technical malfunction. As the plane circles around La Mancha (the native region of both the film's writer-director and one Don Quixote), the crew tries to keep the passengers calm and prevent possible freak-outs. Someone should have told them they're in a Pedro Almodóvar movie: they might have wanted to get a different job.

While the packed coach section gets sedated with a load of sleeping pills, the sparsely populated business class is much more testy and difficult to handle. Still, the three flamboyantly gay stewards (played by a superb comic trio of Javier Cámarra, Raúl Arévalo and Carlos Areces) do an impressive job, given that they have to deal with a rather unruly bunch. This includes a sex-obsessed virgin clairvoyant, as well as a shrill high-class prostitute (priding herself on having slept with no less than six hundred of the most influential men in Spain, including the royal "Number One"). Everyone is feeling (as well as repressing) fear; all commonplace inhibitions are gradually abandoned. The flight proves to be life-changing not only for the passengers and the crew, but also for a young woman left on the ground, who realizes what her true feelings are for a man she took for a scumbag and who may be about to crash.

Ostensibly an ensemble piece designed as a candy-colored, pansexual "Airport," the movie tries hard to coalesce into a farce — preferably one that would evoke the giddy fun of its director's early hit, "Women on the Verge of a Nervous Breakdown" (1988). Unfortunately, Almodóvar fails to make the separate story lines interlock tightly enough to draw sparks and make the film work as a whole. Connections between characters are feeble and undeveloped: we learn that one of the stewards and the plane's bixesual pilot are having an affair, but not much is made of that. The classy hooker (played with dry wit by Cecilia Roth) is obsessed with the malfunction being an attempt on her life, but by the end of the movie we have so little sense of who she is as a person, it's hard to care about her or fear for her safety. That half-baked quality affects practically all characters. Only the gay stewards are fun enough not to draw attention to their paper-thin status as stereotype-fueled vaudevillians.

The movie's look is clean but uninviting: for all its saturated colors and flowery patterns (in Almodóvar's world, even the stewards' outfits come with a finishing touch of blood-red trimming), the film lacks the visual zest and spirit that would make it convincing as a comedy. The set is obviously and intentionally fake, but instead of creating a sense of make-believe, it actually burdens the film and gives it a clinical air that's rather suffocating.

The one truly liberating — as well as liberated — scene (wisely chosen to furnish the film's trailer) is a variety show put on by the crew mid-flight as a diversion. As the three stewards lip-sync to the Pointer Sisters' titular hit, they do a wild dance that's a delight to watch, since all the guys work as a unit. The spirit of stage camaraderie invigorates the whole film for a couple of minutes. The scene comes completely out of left field, though, taking both the passengers and the viewers by surprise with its cheerful abandon. Once it fizzes out, we're back to the clumsy proceedings of the first half.

"I'm So Excited!" is a self-conscious attempt by Almodóvar to reclaim the territory of the shockingly dirty-minded, and yet strangely innocent sex comedies that defined his early career — before he moved on to more pensive comedy-dramas like "All About My Mother" (1999) and the dark drama "Bad Education" (2004). The first hint of a self-nostalgic mode comes early with cameo appearances by Antonio Banderas and Penélope Cruz, both of whom have worked with Almodóvar in the past.

Still, even this playful opening joke fails to serve as a good-luck charm for the remainder of the film. "I'm So Excited!" is a trip recommended strictly for Almodóvar's hard-core fans. Throughout the movie, I wished not so much for the plane to land, as for the movie to finally take off. This happened only in places, and not energetically enough to make me second the emotion of the English title, much less endorse its unearned exclamation point. 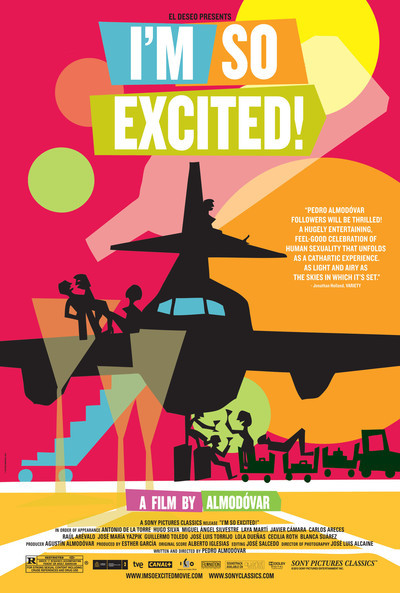