We're back with our bi-weekly guide to the best new offerings on Blu-ray, DVD, and streaming services like Netflix, Hulu, Amazon, and Fandor. As is often the case, when one service kind of slows, another option arises. And so while the number of new offerings of interest on services like Netflix is a little light this month, the recent discs sitting on the New Releases shelf of your local store (presuming you still have one) are kind of amazing. Yes, you already pay for Netflix, but you should splurge for a Blu-ray this week. There are some great choices. 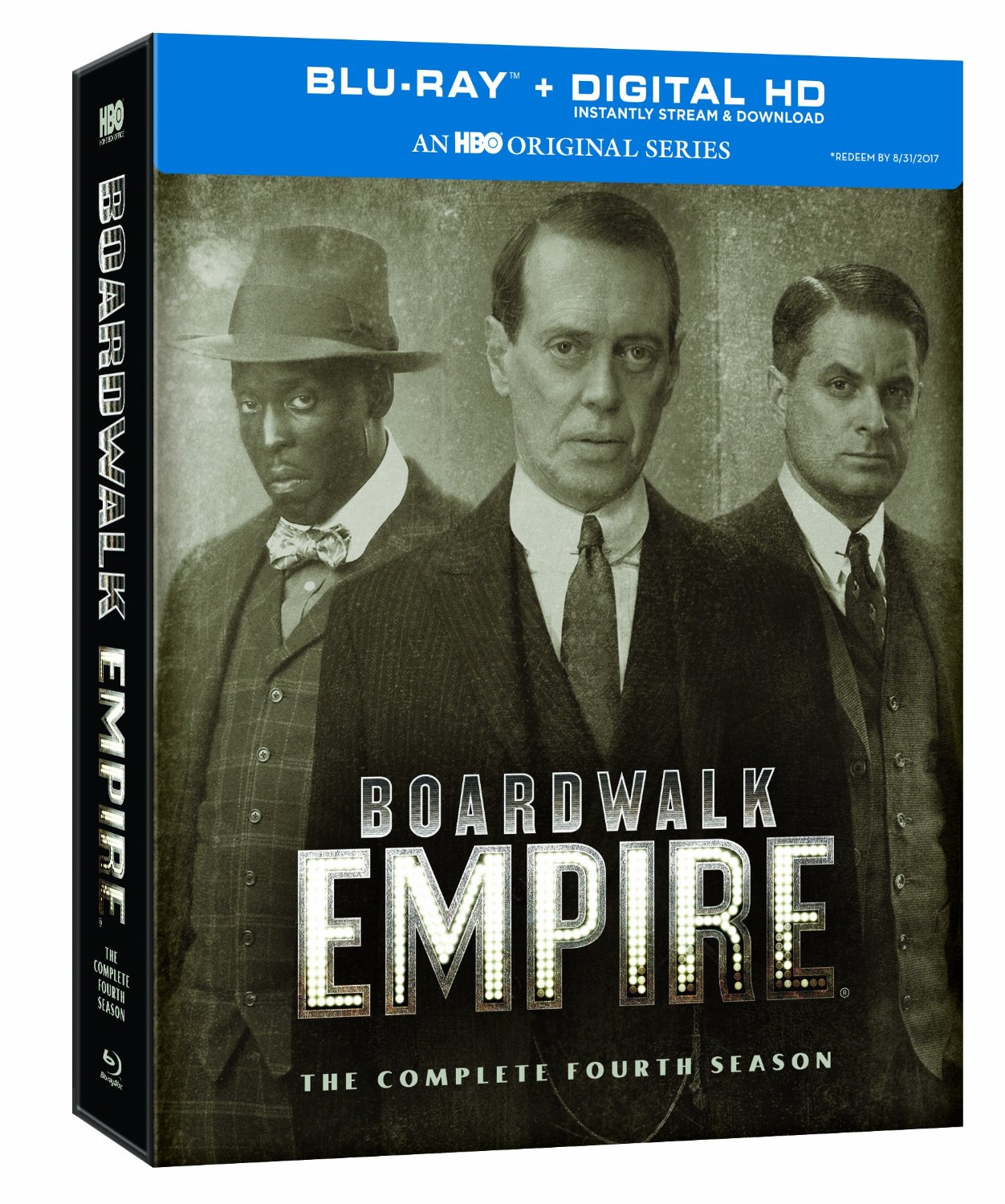 HBO has long been the standard-bearer when it comes to TV on Blu-ray. It's funny because, for a decade, their DVD releases were almost always bare-bones, almost as if they wanted to buck the trend of people buying shows in the hope that they would just watch them on the network. Seasons were released without special features and with standard transfers. But when the Blu-ray revolution happened, a policy change clearly took place at HBO and they have been at the front of the HD wave. Their season sets, like for 2013's installment of their great "Boardwalk Empire" (which will start its final season soon), are glorious. They're packed with special features and perfectly transferred in a degree of HD detail that often surpasses what DirecTV at least streams into my house. They also provide Ultraviolet copies, allowing you to keep your shows and HBO movies in the cloud.

As for these particular offerings, the zeitgeist seemed to jump off the "Boardwalk Empire" bandwagon after season two but I think it's been just as strong, maybe even stronger, since. Watch season four just for the great work by Emmy nominee Jeffrey Wright and nomination-worthy work by Jack Huston. "The Normal Heart," which won the Emmy for Best TV Movie also features some great performances, particularly those of Matt Bomer and Alfred Molina, both Emmy nominees. Buy "Boardwalk Empire: The Complete Fourth Season" here and "The Normal Heart" here.

"The Normal Heart" Special Features:
How to Start a War: An exclusive behind-the-scenes look at the true story that inspirired the film, featuring interviews with Larry Kramer, Mark Ruffalo, Julia Roberts and more! 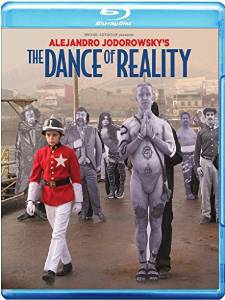 "The Dance of Reality"

The art world rejoiced at the near back-to-back releases of "Jodorowsky's Dune" and his first theatrical effort in years, now available on Blu-ray and DVD. To think that this artist still had such passion and fire in his veins to produce a work this intensely personal and unique that far into his life was inspirational. There's something about "The Dance of Reality" that should inspire all storytellers to consider the possibility that they may not have yet told their most interesting stories. To be honest, I've always found Jodo easier to admire than enjoy. I have a tough time embracing his world but I'm so happy he's still in it, producing works this inspired and bizarre. He is entirely unapologetic and uncomprising, making only what he wants to make even this late in life. And the Blu-ray is marvelously transferred--vivid and shimmery like the oppressive sun of the coastal town in which Jodorowsky grew up and the film takes place. Again, I'm not as high on the film as some of my peers but the very existence of "The Dance of Reality" brings a smile to my face. Buy it here. 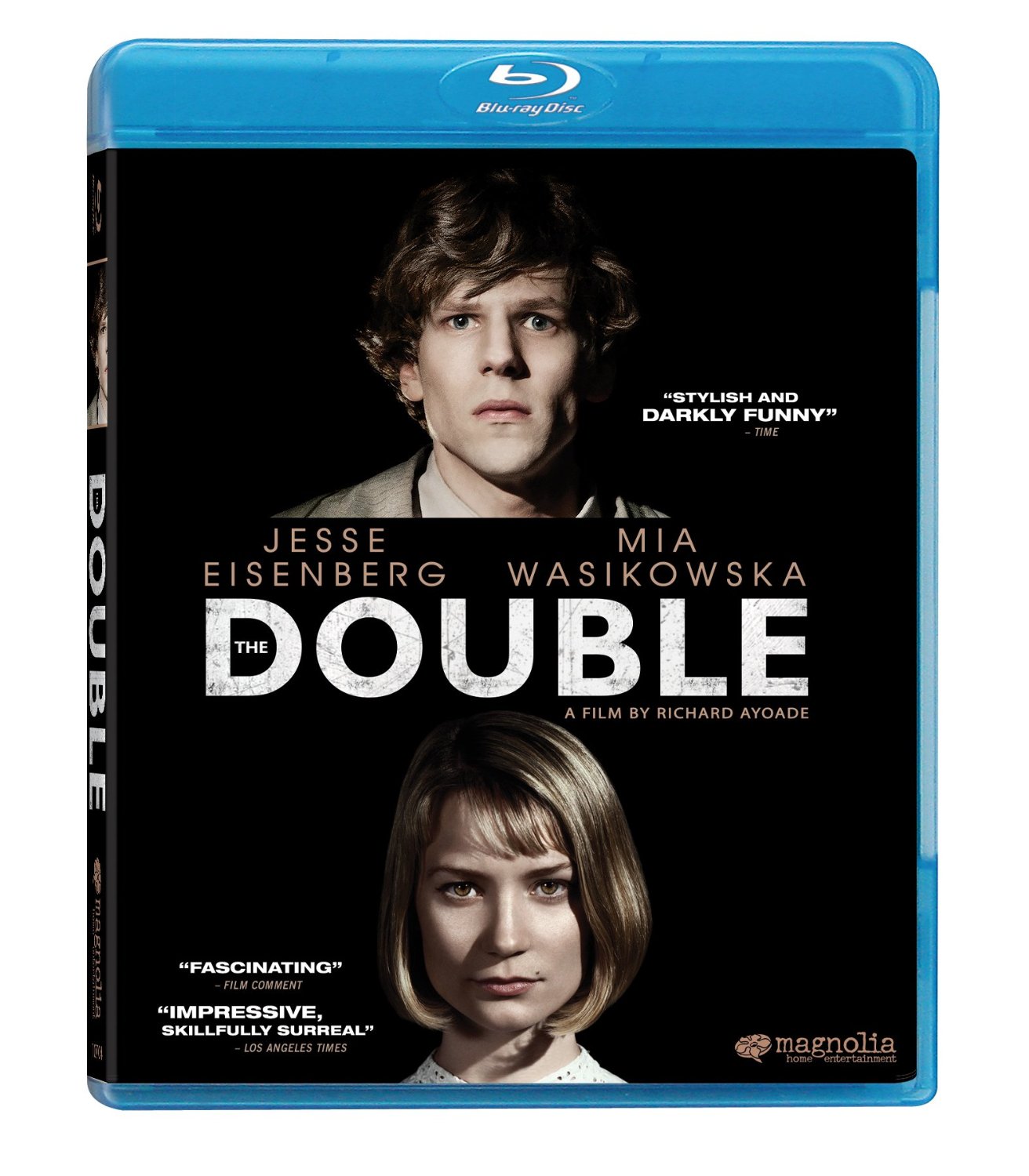 Jesse Eisenberg's work in this festival hit is some of the most underrated of the year, playing both the bookish Simon and his doppelganger James. When the latter becomes a new co-worker of the former, Simon sees his life turned upside down in this quirky dramedy from Richard Ayoade ("Submarine"). "The Double" polarized audiences on its release but I find it inventive enough to warrant a look. There's a bit of a tonal uncertainty that keeps it from entirely clicking into place but Eisenberg's commitment to both characters justifies at least a rental. Or you could buy it here.

Special Features:
Creating "The Double:" The Story and Design
Cast and Characters
Behind the Scenes Comparisons
Interview with Writer / Director Richard Ayoade
AXS TV: A Look at "The Double" 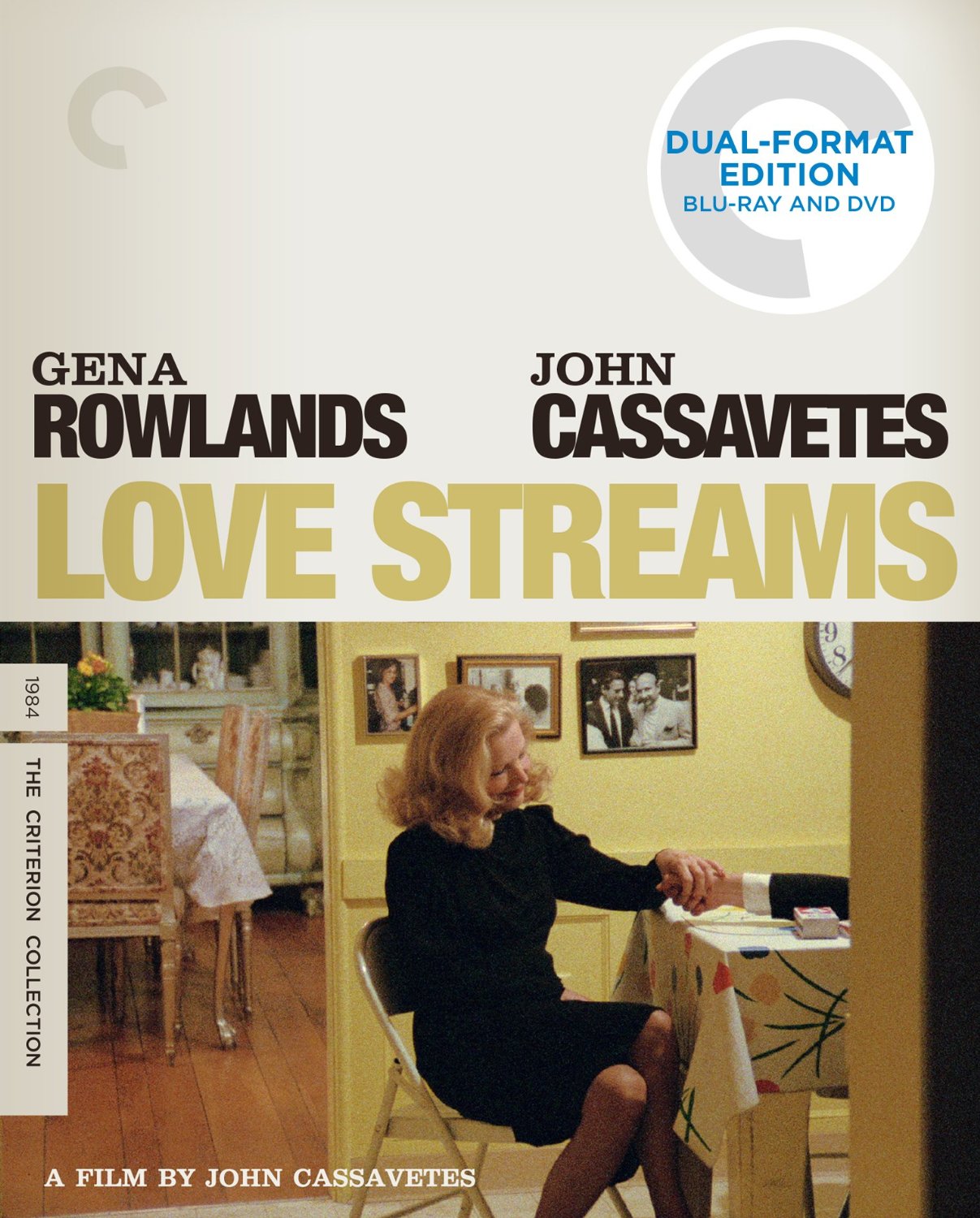 The three Criterion releases since we last produced a guide are three of the best of the quarter, works from John Cassavetes, Alfonso Cuaron, and Pedro Almodovar. I'll admit to a little bit of fan-based blindess when it comes to these three filmmakers in that I believe real collectors should own all of their works when available on Blu-ray. And it helps to make the purchase recommendation even more vocally when their films join the Criterion Collection, the most essential series of Blu-rays on the market.

"Love Streams" may not be the first film that people think of when considering the career of John Cassavetes but his final truly personal work gets a fantastic treatment from Criterion, complete with a full documentary on the director to accompany it. The film itself is more striking than I remembered, a melancholy piece about people lost in the current of changing times. There are moments of absolute truth here and the great Gena Rowlands was never better than in John's films. Buy it here.

Sometimes Criterion digs deep into the international film catalog for their releases (although arguably not often enough) and sometimes they appeal to the masses. "Tie Me Up! Tie Me Down!" and "Y Tu Mama Tambien" are the latter, two films that made massive waves around the world when they were released. Almodovar's film was a gateway drug for me to the rest of his work. It's not his best film but it earned a ton of attention for its sexually charged subject matter and led audiences to Pedro in record numbers. Without "Tie Me Up!" we may not have "Talk to Her" or "Volver," two films I unabashedly adore. "Y Tu Mama Tambien" is the better of the two films, an announcement of a major new talent when it was released and a work that holds up surprisingly well today. It's a brilliant coming-of-age piece with breakthrough performances by Maribel Verdu, Gael Garcia Bernal and Diego Luna. Cuaron may have just won his Oscar for "Gravity" but the road that got him there started here. Of course, both films get the Criterion HD transfer treatment. No one is better. They never over-polish their films, keeping them in a state that looks like, you know, film. Buy the Almodovar here and the Cuaron here.

"Tie Me Up! Tie Me Down!" Special Features:
New documentary on the making of the film, featuring interviews with Pedro Almodovar; Agustin Almodovar; actors Antonio Banderas, Victoria Abril, Loles Leon, and Rossy de Palma; production manager Esther Garcia; and cinematographer Jose Luis Alcaine
New interview with Almodovar collaborator and Sony Pictures Classics copresident Michael Barker
Conversation from 2003 between Pedro Almodovar and Banderas
Footage from the film's 1990 premiere party in Madrid
PLUS: A booklet featuring a 1990 piece about the film by Pedro Almodovar, a conversation between critic Kent Jones and filmmaker Wes Anderson, and an interview with Almodovar from 1989.

"Y Tu Mama Tambien" Special Features:
Two new pieces on the making of the film, featuring interviews, recorded at the time of production and in 2014, with actors Gael Garcia Bernal, Diego Luna, and Maribel Verdu; Alfonso Cuaron; cowriter Carlos Cuaron; and Lubezki
New interview with philosopher Slavoj Zizek about the film's social ad political aspects
On-set documentary from 2001
Deleted scenes
"You Owe Me One" (2002), a short film by Carlos Cuaron
Trailers
PLUS: A booklet featuring an essay by critic Charles Taylor and reprinted character biographies by Carlos Cuaron and Alfonso Cuaron. 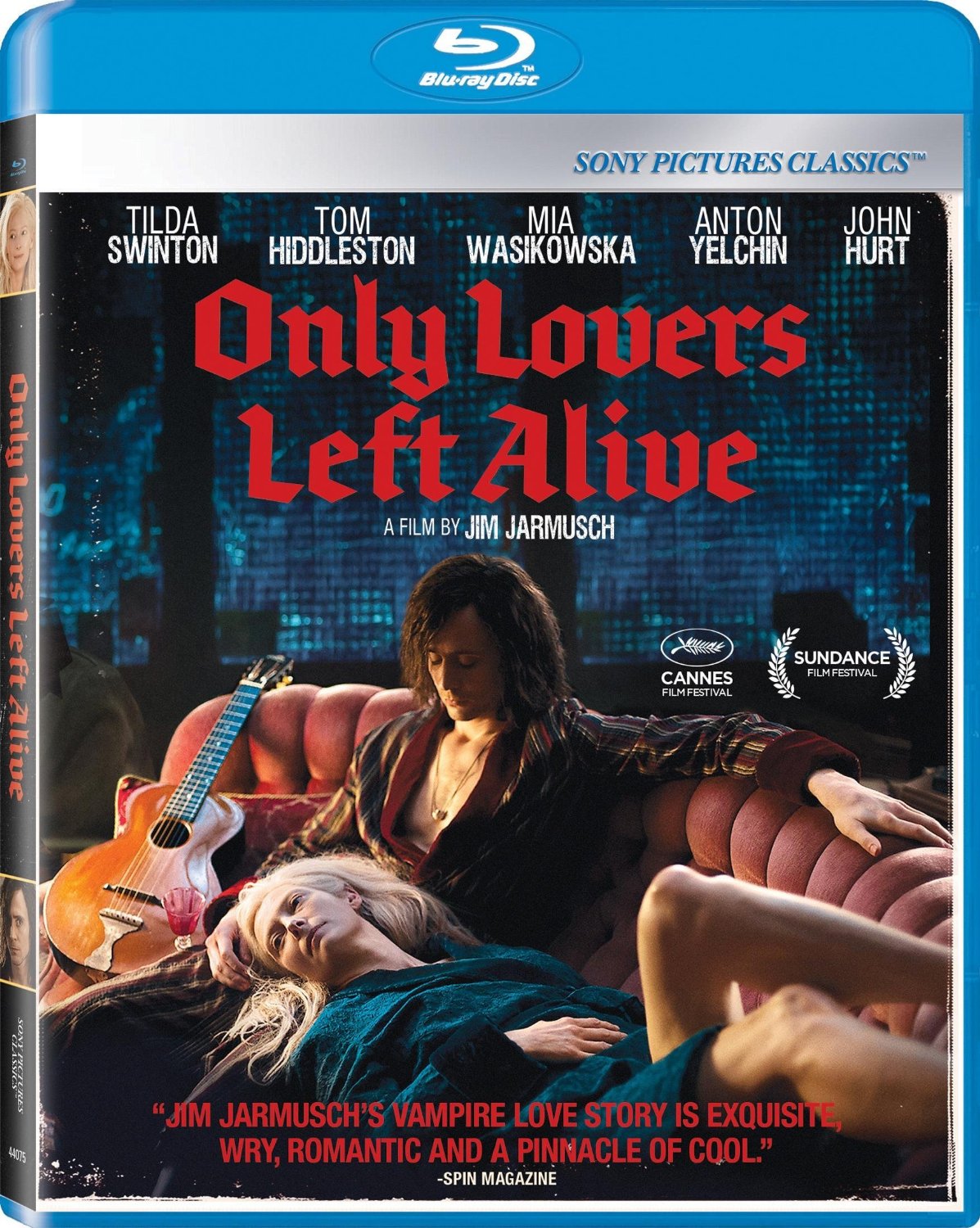 Jim Jarmusch's latest film is also one of his best. Personally, I've been a bit unengaged with Jarmusch's work of late, but I fell madly in love with this work, the one I would call his best in 25 years. Tom Hiddleston and Tilda Swinton star as two of the last vampires in a world of humans they call zombies. We have so poisoned our lives and our humanity that even the monsters don't want to be here any more. The tonal shifts in Jarmusch's film are breathtaking. It can be both melancholy and joyous at the same time. It is deeply sexual and yet playful too. It reminds me of Wong Kar-Wai's work, particularly "In the Mood For Love," and I could hang with Hiddleston and Swinton for hours. It's one of the best films of 2014 and you should buy it here.

Streaming services have been a bit quiet lately but there are a few films on Netflix that you definitely should see and you'll have a hell of a time trying to find them through the awful "New Releases" interface on Netflix. Click through to the reviews and links on the left side to "Watch It Now" to do it more easily.

Finally, want to pay for a movie? How about one of these, including one of my favorite films of the year?