One of the toughest challenges for a filmmaker is to take a story to which everyone knows the ending (or at least ought to know the ending) and retell it in a way that puts the outcome in doubt again. Steven Spielberg accomplishes this in this year’s fact-based Cold War tale “Bridge of Spies,” and now Mexican director Patricia Riggen does something not dissimilar with a fact-based story of more recent vintage.

“The 33” is a technically impressive simulation of the mine collapse and rescue in Chile in 2010, a cataclysmic event that saw 33 miners trapped underground for a stupefying-seeming 69 days. Their plight became an international cause during that period, and their incredibly improbable rescue was a “whole world is watching” moment on a par with the first moon landing. The movie throws together an international cast that may on first glance strike the movie-savvy viewer as improbable as well: while the English-language production features Antonio Banderas and Lou Diamond Phillips, two actors with obvious Latino bonafides in several departments, in key leading roles, it also has French actor Juliette Binoche and Irish actor Gabriel Byrne in prominent parts, both playing Chileans. It’s a testament to director Riggen’s skill with actors that she makes the ensemble a seamless one. Unless your objections to casting against conventional type are violent ones, there shouldn’t be a problem

A slight problem comes up at the movie’s opening, as the chief characters are introduced in a party scene. One is an elderly miner who’s retiring; another is an experienced fellow who’s asking his buddy and foreman for an extra shift on a day he’s supposed to have off; another is a younger miner who’s about to become a father and who’s looking into getting out of the mining biz as a result. All three of these cases, of course, add to the “what incredible irony” quotient when a chunk of rock two times the mass of the Empire State Building trap them almost 2,000 feet underground, with only three days’ worth of food and water rations in the refuge area where the miners roost.

It’s in the aftermath of the catastrophe that the movie ramps up the suspense and claustrophobia. The story toggles between the mine and the surface world. Below, the miners assess their situation and determine the measure of its true desperation. Above, miners’ families—including Binoche’s Maria, the guilt-ridden sister of a drunkard miner, one pregnant wife, and the competing wife and mistress of one sheepishly rakish worker—demand answers and action. The Chilean government, in the person of a green and earnest minister played by Rodrigo Santoro (“Che,” “300”) steps in; Gabriel Byrne’s tough mining engineer thinks the miners are all but dead ducks, and his interactions with Santoro’s character do a good job with explaining just why the chances for a rescue were initially in the vicinity of one percent.

The ensuing action shows how the odds increased. There are a lot of characterizations, and a few character arcs, that the movie takes on, and Riggen doesn’t mind having to do sketches—a more thorough movie would have been, well a mini-series. But it’s a real accomplishment that she keeps the action coherent throughout, and she shows admirable daring at times. The impending starvation of the miners inspires a hallucination dinner scene that’s pretty audacious, and genuinely funny. Anchoring the underground action are the performances of Banderas and Phillips; the former is reliably charismatic as usual, while Phillips provides a bunch of reminders of what a subtle and effective actor he can be. This unabashedly crowd-pleasing movie gets to its uplifting but also somewhat disquieting conclusion and coda (which, as is the custom these days, introduces the audience to the real-life miners) with its integrity intact. As such, it’s a pretty pleasant surprise, and in more than one way. 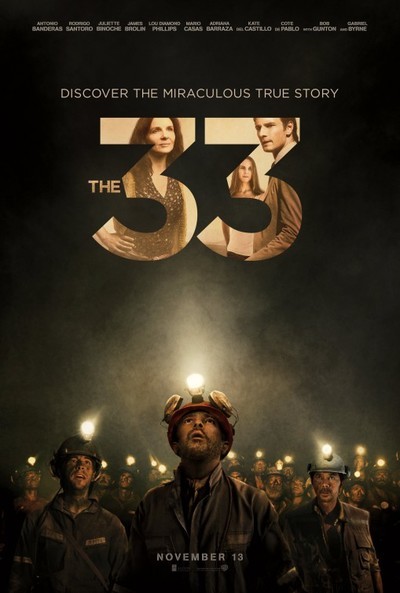