In “Black Butterfly,” Antonio Banderas’ reclusive, alcoholic writer character Paul suffers from extreme writer’s block. How does the film communicate this? It opens with a shot of him leaning over a typewriter writing the words, “I am stuck” over and over again on a single page.

This would be a snort-worthy sight gag in just about any other movie, but in “Black Butterfly,” it’s one in a long line of leaden attempts to wink at the camera. Director Brian Goodman (recently recurred on the TNT drama “Rizzoli and Isles") and co-screenwriters Marc Frydman (producer of “Flyboys” and “Welcome to Mooseport”) and Justin Stanley (co-writer of “Beneath Loch Ness") have crafted a charmless, nonsensical thriller, filled to the brim with faux-insights that wouldn’t impress even the most inattentive college freshmen. “Black Butterfly” communicates all of its empty-headed ideas idiotically, but still retains a knowing smugness regarding its intentions, like it’s pulling a rabbit out of a hat while acting like no one’s ever seen such a trick.

The film’s needlessly drawn-out plot involves Paul inviting transparently creepy drifter Jack (Jonathan Rhys Meyers, overacting like his life depends on it) to stay at his house for reasons not worth explaining. While ostensibly “fixing up the place,” Jack learns that Paul is trying to write a screenplay to pay off some the bills, so Jack gives him an idea for a film—the story of how they met! Of course, Jack gets a little too familiar with Paul and his writing, turns out to be an impulsive weapon-wielding psychopath, and eventually takes Jack and his realtor crush Laura (Piper Perabo, utterly wasted by the film) hostage. Oh yeah, and there’s been a bunch of murders in the town recently, which may or may not be relevant information (spoiler alert: it both is and is not relevant information).

Putting aside every plausibility concern imaginable, which include everything from Antonio Banderas passing as a writer to the premise itself (who witnesses an assault in a diner and then invites the perpetrator to stay in their home?), “Black Butterfly” still collapses under the weight of its own brand of stupidity, specifically the desire to convey both writing and life advice beneath the guise of a home-invasion thriller. Jack operates as something of a wide-eyed wellness coach to Paul, pushing him to recommit to his work and to give up drinking, even though he ironically speaks in tips you’d most likely hear from a drunk at the end of a bar, mainly the importance of being real.

If you squint so hard that your retinas might be in danger of permanent damage, you can find the genesis of a moderately compelling idea—a jailer uses violence to motivate a trapped soul to free himself—but Frydman and Stanley never generate enough tension, dramatic or otherwise, to help it blossom. With bland, creaky action and sub-standard performances (Banderas comes off best, but scans as constantly bored), all that remains is the God-awful, self-aware maxims about “narrative” derived from the “meta-commentary without any foundation is inherently clever” school of hard knocks. “Most characters seem like what they are: characters in a movie,” Jack tells Paul early in the film, an infuriating line that implies simply acknowledging hollowness somehow renders it substantive, a sentiment that runs through the entire film.

And then there are the twists. Dear Lord, the twists. Yes, there are two, the second more insulting than the first. They successfully throw “Black Butterfly” off-balance in a way that forces the audience to question why they even watched the film in the first place. Moreover, the twists also attempt to provide cover for any and all substantive criticisms, similar to a bully pushing you in the mud and then claiming, “We were just rehearsing for a play!” Obviously, the aforementioned cover is insufficient and offensive to anyone who even mildly cares about coherency. Honestly, the only interesting part of “Black Butterfly” is that legendary director Abel Ferrara cameos in a single scene as a shopkeeper, begging the question, “Why aren’t you in a better film?” 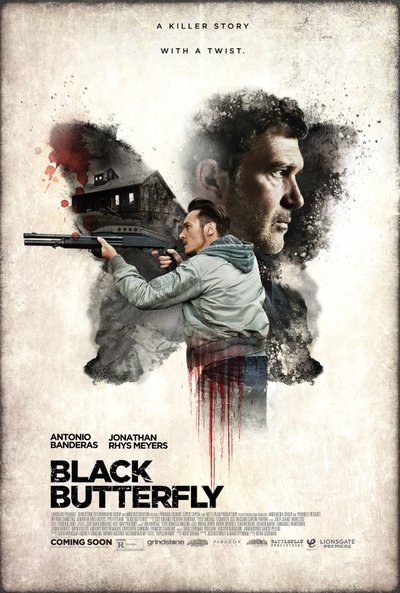