Life is complicated. “Life Itself” is convoluted. Not to be confused with the title of Roger Ebert’s memoir, Dan Fogelman’s “Life Itself” packs in enough narrative twists and turns to leave viewers with a sense of emotional whiplash. One tragedy bleeds into another so often that the events begin to blur. How like life itself.

Now, if you want to feel every bump on the movie’s emotional roller coaster, then go in knowing as little about it as possible. Feel what you feel and enjoy the ride. For folks who don’t mind a little more details before buying a ticket, read on.

Will (Oscar Isaac) is a disheveled man who’s clearly going through a tough time. He abandons working on a terrible script in a New York City coffee shop to refill on caffeine, booze, and Xanax. He then disturbs the peace and is promptly thrown out of the cafe. Will reluctantly saunters off to his therapist (Annette Bening) for a mandated session, where through terse exchanges between doctor and patient, he finally opens up about what’s troubling him: his wife, Abbey (Olivia Wilde), her absence, his institutionalization and that he’s a father of a child he hasn’t yet seen. Just as it feels like we’re heading to some semblance of catharsis, Will’s story ends abruptly. The movie skips ahead a few chapters to his daughter’s morose childhood and rebellious early adulthood. Dylan (Kya Kruse when young, Olivia Cooke when older) grows nostalgic for the parents she never knew.

With almost no warning, “Life Itself” uproots itself again, this time moving from a tragedy-ridden New York City to a much calmer, slower-paced Spain. Here, the narrative finds Mr. Saccione (Antonio Banderas), a wealthy landowner, in talks to promote his dedicated, soft-spoken laborer, Javier (Sergio Peris-Mencheta). The men enter into an uneasy agreement where Javier will help manage Mr. Saccione’s olive orchards, but he asks that his boss try not to be friends with him. The promotion allows Javier to marry his girlfriend Isabel (Laia Costa), enjoy a spacious home and start a family. Over time, Mr. Saccione grows a bit too friendly with Isabel, and their young son, Rodrigo (Adrian Marrero, later played by Àlex Monner), and Javier attempts to defend his boundaries. However, after Rodrigo is traumatized by witnessing a horrible accident, he needs special treatment that only a rich benefactor like Mr. Saccione could afford. A family drama ensues, as does the couple’s separation and later, Isabel’s cancer diagnosis and Rodrigo’s departure to college in—wait for it—New York City.

True to Fogelman’s multilayered, melodramatic NBC series, “This is Us,” “Life Itself” revels in its story’s highs and lows. An accident will be followed by a suicide, or a prank followed by news of a character’s death. The movie only narrowly misses the most predictable of cliches by jolting the audience with a steady diet of unfortunate events. Adding to that disorientating feeling is the film’s cycle through various characters. It’s an approach better suited for a drawn-out TV show, but in the short runtime of a movie, the effect is lacking. No sooner do we start to feel empathetic for one character’s struggles than we’re moving on to find someone else to attach to.

A few repetitive themes and musings overstay their welcome, none more egregious than the constant reminder that we are being led by an unreliable narrator who is withholding knowledge. It’s like a kid on Halloween who goes to the same house many times, with each subsequent appearance wearing on our patience. This is how the movie accounts for its revolving carousel of characters, but in trying to smarten up the mushy plot, the narrative device becomes a nuisance.

That isn’t to say the performances in “Life Itself” are bad. Thankfully, the cast is stocked with many experienced actors who give the drama-laden script their all. Isaac does his best impression of a man haunted by the loss of his wife and his mind. Mandy Patinkin takes a quiet approach to his role as Will’s father, making him a kind of gentle pushover for his granddaughter, Dylan, who's still her rock through their shared losses. Banderas makes his character difficult to figure out whether he can really be trusted, enhancing that story’s tension. Costa perhaps has the best role as the long-suffering wife caught between two men’s egos. Wilde is believable in her role, which changes depending on how Will remembers their interactions. She has seen through his experiences. Abbey never quite feels like a fully formed character but more like a tragic mystery to solve.

This cast parade means the young talents of Cooke and Monner never quite have enough time to make an impression. All we see of Dylan is that she is petulant and short-tempered, the frontwoman of the least believable punk band in a movie. Monner has a bit more time to embody the varying emotions of Rodrigo as he leaves his dying mother to go to college. Monner earns one of the best laughs in the movie during the awkward April’s Fool lunch he has with his freshman year girlfriend; but of course, this moment of brevity is short-lived when devastating news arrives as soon as he walks into his dorm room.

Ultimately, “Life Itself” plays like a soap opera squeezed into two hours. Some people will like it, enjoying a TV season’s worth of heartbreak in a bite-size binge. In my case, I left dazed from the multigenerational journey and wondering if my post-screening feelings were side effects from becoming too numbed or overwhelmed by schmaltz. “Life Itself” loads up plot line on top of plot line to imitate emotional depth, a kind of narrative manipulation that just doesn’t work for everyone.

This review was originally filed from the Toronto International Film Festival on September 8th. 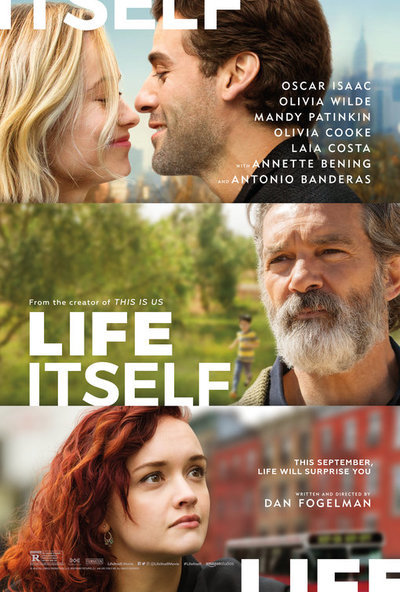 Rated R for language including sexual references, some violent images and brief drug use.

Oscar Isaac as Will