There’s a tender, heartbreaking scene in Pedro Almodovar’s excellent “Pain and Glory,” in which one character asks another if the pain he caused him derailed his art. The other, a famous director who knows a thing or two about physical and emotional pain, scoffs at the idea. After all, art is one of the few professions not derailed by pain. Some of the best artists have worked their pain into their craft in ways that other jobs simply don’t allow. Pain doesn’t derail an artist’s career; it shapes it. And Almodovar’s film captures the way life is reflected in art in ways that only a master filmmaker could possibly even attempt. It’s a deeply personal and very moving film, anchored by the best work of Antonio Banderas’ career.

Of course, casting Banderas as a stand-in for Almodovar himself named Salvador Mallo brings the world of fiction and reality together in interesting ways before the film has even begun, given how often the two have worked together across the decades in films like “Matador,” “Tie Me Up! Tie Me Down!,” and even the more recent “The Skin I Live In.” It’s unlikely that any collaborator knows Almodovar as well as Banderas, who has worked with him now for over three decades. (With the exception of maybe Penelope Cruz, but she’s in here too. We’ll get there.)

So when “Pain and Glory” opens with a narrative in which a famous director reunites with an actor whom he made a star decades earlier, the meta-aspect of watching Banderas play a version of Almodovar himself is clearly intentional. Is Alberto Crespo (Asier Etxeandia) intended as a stand-in for Banderas or someone else from Almodovar’s past or a purely fictional creation? It’s likely a mix of people Almodovar worked with over the years with whom he lost touch, either intentionally or otherwise. For Mallo and Crespo, there’s bad blood. Mallo didn’t like Crespo’s work in their breakthrough film, accusing it of being too influenced by the actor’s heroin use. Years later, they reunite for a Q&A and Mallo, in a great deal of pain because of chronic health problems, decides to try chasing the dragon himself, quickly becoming addicted to heroin. It’s a story of someone reaching into the past, pulling out something formative, and then using it to reshape and inform the present—like how great artists often do.

Don’t worry—“Pain and Glory” is not the story of a drug addict. From the story of heroin and Crespo, it goes very unexpected places, all of it intercut with memories that Mallo is having of his childhood. In the flashbacks, the wonderful Penelope Cruz plays Mallo’s mother, and, again, the long working relationship between actor and auteur clearly influences the final product. It takes a great deal of trust between writer/director and actor to put something that feels this personal up on screen and not have it come across as self-serving or maudlin. Back in the present day, the reunion with Crespo inspires another reunion that’s among the most heartbreaking and moving scenes in Almodovar’s history, all while Mallo’s lingering health problems appear to be getting disconcertingly worse.

There is, of course, a long history of great filmmakers coming to terms with their own history and mortality through storytelling. “Pain and Glory” has been compared to Federico Fellini’s “8 ½” for exactly that reason. Almodovar has never shied away from telling his own stories, particularly about the women in his life, but there’s a poignancy to the way he approaches it here that he hasn’t really reached before. It’s largely due to how he places himself in the center of the story, not as an observer or cinematic memory but as the protagonist. He’s asking questions about the nature of life and art that filmmakers have certainly asked before, but there’s a grace here that’s rare, even for him. It’s a delicate, complex film, lacking in some of the visual whimsy of his best work, but as grounded in character as anything he’s done.

One of the reasons for that is how much trust Almodovar places in Banderas, and how much that trust is reciprocated. Banderas never once feels like he’s doing an Almodovar impression, and yet their friendship clearly influenced the performance in ways that other actors couldn’t have possibly understood. Perhaps the best praise that I can pay both gentlemen is that, while the actor and director clearly shaped the character, Banderas and Almodovar both fall away and we become invested in the story of Salvador Mallo. He’s not just a stand-in as he could have been in a lesser film—a symbol for the aging auteur. He’s a fully-realized, emotional, complex character in his own right.

“Pain and Glory” will be too episodic for some. It has a surprising structure in the way it moves through encounters in Mallo’s life and his past, not always connecting the dots. But it also has cumulative power. Without spoiling anything, the final section of the film features the discovery of a piece of art that wouldn’t exist without Mallo or his mother, and then closes with the creation of another. Art may be shaped by pain and life, but it also captures beauty and glory like nothing else.

This review was filed from the Toronto International Film Festival on September 6th, 2019. 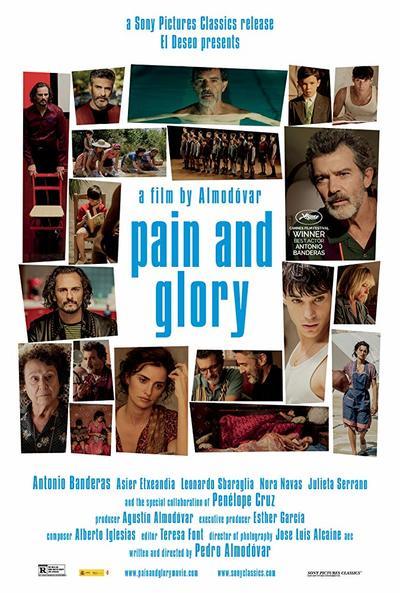