Window-shopping is daily the source of one of the best free shows in Cannes. There's nothing quite like walking around this town, even if it's just a brief walk between screening rooms, and ogling what could be bought if you had millions of dollars at your disposal: the most extravagant flower arrangements, the most colorful and sumptuous pastries, piles of diamond necklaces, strapless cocktail dresses with skirts of white marabou feathers or silver palettes, ice-cream-pastel Chanel suits with glittering sequin trim.  The loot of the world's fashion runways is displayed in all its theatrical and expensive glory in the shops that face the Croisette, and most of these outfits would look outlandish anyplace but right here in Cannes.

There could hardly be a more appropriately deluxe setting in which to premiere a high finance-themed film like "Wall Street: Money Never Sleeps," Oliver Stone's sequel to his 1987 "Wall Street."  However, I came away from an early morning screening with the feeling that I should have slept in and sent my wallet to the show instead.  This is a film aimed at someone with the intelligence of an inanimate object, and I say that having always respected Oliver Stone's work, especially films including "Salvador," "Platoon," and the first "Wall Street." 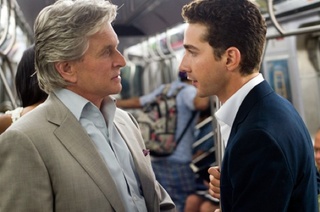 "Wall Street: Money Never Sleeps" is thoroughly over-interpreted, over-illustrated, and pre-digested, leaving us no dots to connect on our own, nothing to launch us into the realm of our imaginations.  As each mechanical plot device unfolded, I began to feel like I was watching one of those corporate PowerPoint presentations that HR departments are so fond of, where you're forced to simultaneously watch information on the screen, read along from a handout, and listen to a speaker read it aloud.

May 15 -- Time in Cannes is the most precious commodity of all.  For anyone who hasn't been here, it may be hard to imagine the vast scope of this festival.  Here's an illustration. On Friday night at 7:00 pm I went to see the Belgian film "Little Baby Jesus of Flandrs" (not a misspelling) in the Directors Fortnight. In order to do that, I made a conscious choice to forego seeing 39 other films that would begin in either the film market or an official section of the festival in the time between the start of my chosen film and the its conclusion 78 minutes later.  Roughly every fifteen minutes, a new crop of films begin somewhere as part of the festival or market. 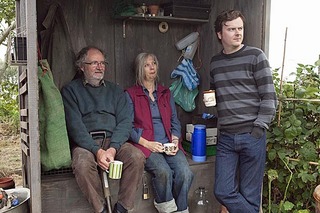 Some days turn out to develop themes. Saturday seems to be about love in all its forms. The day began with Mike Leigh's "Another Year," a film that features an ensemble cast but puts a focus on one central character who is the 180-degree opposite of his bubbly heroine of "Happy-Go-Lucky."  Long married, with a grown son, Jane and Tom are close to retirement age but still working. She's a psychiatric counselor and he's a geologist. They're uncannily well adjusted, placid, and supremely content in their lives and marriage.

By contrast, Mary, Jane's friend of twenty years and a frequent guest in their home, is unhappily single and the perennial victim of romantic disaster.  Mary, a nervous, self-centered non-stop talker, develops an obsessive and unrequited attachment for Joe, Jane and Tom's 30-year-old son. One day, Joe brings home Katie, his first really serious girlfriend, and it becomes evident that Mary is headed for meltdown.

Leigh mixes the opposing temperaments and life trajectories over the course of a year, with a different section of the film for each season. His mastery in portraying the intricacies of family life--the comic faces made behind someone's back, the looks of complicity, the quick, tender touches--is extraordinary.

Jane and Tom's home, which is seen to be warm and inviting, and where they are good cooks and generous, caring hosts, is at the center of the film.  Leigh constructs an idealized happy family. They are genuinely content people, and there is no villain lurking in the background.  Perhaps one of the most interesting things he does in this film is to portray the many little ways in which the family's contentment with each other is hard earned through kindness, caring, and listening.  Leigh suggests that Mary has made the choices that have put her outside the charmed circle of this life. 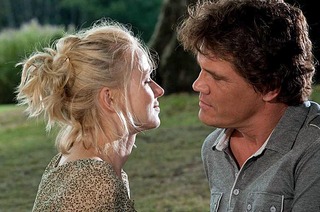 Woody Allen's "You Will Meet a Tall Dark Stranger" with its all-star cast including Antonio Banderas, Josh Brolin, Anthony Hopkins, Gemma Jones, and Naomi Watts, presents a more elusive, funny, and caricatured view of romantic love and family.  This being France, where Woody Allen has a godlike reputation, this is a film that had crowds outside the Palais whipped into a frenzy a few minutes before the press screening. Petitioners with signs begging for tickets clogged the sidewalks.  Journalists pressed mob-like into the line-up areas. We poured into the Grand Theatre Lumiere, where larger than usual contingent of guards herded us into rows like school children, instead of letting us choose our own seats.

Delusion reigns supreme in "You Will Meet a Tall Dark Stranger."  This is a darker film with a far more troubling undercurrent than the relatively frothy "Vicky Cristina Barcelona," but Allen's lovers and would-be lovers are so likeable, his feel-good ending so welcome, that his darker implications slip by in jaunty disguise.

Helena, an older woman, visits a London fortune teller (Pauline Collins, who will be familiar to fans of "Upstairs Downstairs" as the maid Sarah) for guidance in starting her life over as a recent divorcee.  Helena's ex-husband Alfie has set himself up as a bachelor-about-town, and is set to marry Charmaine, a curvaceous hooker.  Helena's daughter Sally is married to struggling novelist Roy, but has a crush on her art gallery-owner boss Greg. Roy has an obsession with Dia, a pretty neighbor he stalks daily from his window.

Each of these characters wants someone or something else. Allen lets their dreams lead for a time, but one by one, reveals them to be delusions. Despite the twists and turns and wrecked dreams, this is too sunny a film to call outright cynical, but it's very much a be-careful-what-you-wish-for statement on the perils of love and attraction. 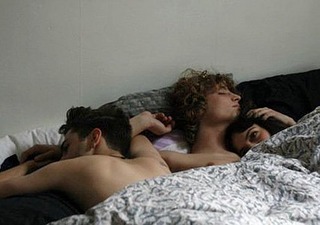 French Canadian director Xavier Dolan, winner of three awards at Cannes last year for his "How I Killed My Mother," is back with his second feature, "Heartbeats," which also turned out to be a film about love and delusion.  Best friends Frankie and Marie lust after the new boy in town they spot at a party. He's Nick, an innocently ditzy blonde, tousle-haired hunk who looks like Michelangelo's David come to life. Frankie is gay, and Marie is straight, and they become instant rivals in pursuit of the stranger's affections.

"Heartbeats" is a colorful, youthful movie about a love triangle that takes an old-fashioned romantic view of love and longing that at times makes it seem like a 21st-century "Jules and Jim." The director's best strategy was keeping Nick's sexuality an enigma, even as his adoring would-be lovers learn virtually everything else about him.  Love and friendship win the day, but not exactly in the way that either Frankie or Marie had dreamed.