Steven Soderbergh’s “The Laundromat” is a star-powered drama about a very complex issue: how the modern systems to protect wealth have left the meek farther from inheriting Earth than ever before. The issue of the Panama Papers never quite got enough attention in the press. It’s not quite sexy to point out how the 1% damages everyone else in the world as they avoid the law and taxes. It also doesn’t help that it’s an incredibly complicated issue, the kind that doesn’t lend itself to packages on the nightly news or feature films.

This has not stopped the great Scott Z. Burns (who is also at TIFF with the excellent “The Report”), who collaborates again with the director of his scripts for “The Informant!,” "Contagion," and "Side Effects" to tell another story of corporate malfeasance with an A-list cast. A wonderful ensemble, a brilliant director, and a genius screenwriter all get together for “The Laundromat,” a film they clearly took very seriously, but that they never figured out how to make entertaining to an audience. "The Laundromat" will draw numerous comparisons to Adam McKay’s films—I’m not a fan of them, but he knows how to make dry subject matter easy to understand and entertaining to modern audiences. Burns and Soderbergh never quite cracked “The Laundromat,” even if there are individual elements here to admire.

One of the problems with “The Laundromat” is star power leads one to believe that Meryl Streep’s Ellen Martin is the protagonist of this story. She’s not. She’s only one of several characters in an episodic structure that’s designed to illustrate the reach of shell companies and the corruption that grows from wealth. She’s the first one we meet, a woman whose husband (James Cromwell) dies in a ferry accident. The ferry owners (Robert Patrick & David Schwimmer) discover that the insurance policy they had was a scam. It was part of a system of companies that basically don’t exist, run through a high-powered con artist in the Bahamas, played by Jeffrey Wright. And so Martin’s settlement check ends up a fraction of what it should have been if greedy people hadn’t been, well, greedy.

What follows are basically a series of vignettes about the international reach of shell companies. In the film’s best sequence, we meet Charles (Nono Anonzie), a very wealthy man who just happens to be having sex with his daughter’s friend. When his house of cards threatens to collapse, he uses bearer shares as capital, illustrating how people this rich can use imaginary companies and accounts as weapons. Another segment stars Matthias Schoenaerts, and details how efforts to keep this system working and underground can lead to actual death. And through all of it, two attorneys who are the kings of shell companies—Jürgen Mossack (Gary Oldman) and Ramon Fonseca (Antonio Banderas)—break the fourth wall to try and explain it all to us.

Oldman and Banderas are undeniably charming actors, but they’re almost too much so for what Burns and Soderbergh are reaching for here. There’s a smug archness to most of their scenes that’s off-putting, almost nihilistic. It has an air of, “This is the way it is, and there isn’t a thing you can do about it, peasant.” And as Ellen keeps pushing through this world and basically finding that the buck stops nowhere, “The Laundromat” becomes an increasingly bleak experience. In the film’s worst choice, when Ellen’s arc basically ends, it’s as if Soderbergh and his producers were unwilling to say goodbye to the legendary actress, and so they put a costume on her and recast her as a Hispanic secretary at Mossack and Fonseca’s company. Even if you don't consider it offensive, it's a bizarre choice, and, worst of all, a hint that no one involved with “The Laundromat” is really taking the subject seriously. While we're pulling back the curtain on inequity, let’s have some goofy make-up work too!

There are just too many creative decisions in “The Laundromat” that don’t come together, from the chapter titles that have less depth than your average listicle to the fact that nearly every single part is cast with a recognizable face, often having just a line or two. Most of all, it’s an issue of tone—the film comes off as patronizing, a feeling I’ve never had before watching Soderbergh. He’s investigated the systems of the world before in everything from “Erin Brockovich” to “The Girlfriend Experience,” but those films had a compassion for their characters that’s missing here. After all, the average viewer for this on Netflix is going to be closer to Ellen Martin than the uber-wealthy protected by Mossack and Fonseca. Of course, “The Laundromat” doesn’t need to place the Ellen Martins of the world on a pedestal to make us feel compassion for them, but it would be nice if it felt like the movie actually liked her, and us, in the end.

This review was filed from the Toronto International Film Festival on September 12th. 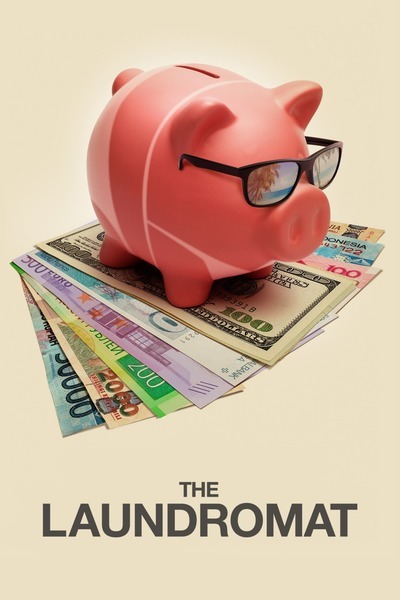