"Official Competition," a Spanish comedy about a director and two actors preparing to shoot a movie, is performance-driven. It consists of little more than scenes of its three leads interacting, mostly in a series of rehearsal spaces in an elegantly designed office facility. But its lead performers Penelope Cruz, Antonio Banderas, and Oscar Martínez inhabit their fully-realized characters with such wit that it's a treat just to watch them exist. Co-directors Mariano Cohn and Gastón Duprat (who also collaborated on the script) have a sharp eye and brilliant timing, and often manage to wring laughs just from the sight of a character picking up an object, or leaving or entering a room. The question, "When will they leave rehearsal and shoot the movie?" eventually stops coming up in the viewer's mind, if it ever appeared in the first place.

Cruz plays Lola Cuevas, a hot (in every sense) auteurist director. She's been hired by a rich man named Humberto Suárez (José Luis Gómez) who, in the film's opening scene, announces his desire to leave some sort of legacy beyond wealth. He initially considers paying for a bridge with his name on it and then donating it to the government, but decides instead to buy the rights to a critically acclaimed work of literature and finance a film adaptation.

Humberto sheepishly admits to Lola that he's never read the book he paid so much to acquire and asks her to tell him the story during a meeting. Lola says it's about a couple of very competitive brothers who become deeply estranged after the younger one accidentally kills their parents during a drunk driving accident. The elder brother calls the police and the younger ends up going to prison for several years. In the end, they reconcile, and there are many twists along the way. But that story is not the film's focus. The focus is on what happens when Lola invites her two lead actors, Félix Rivero (Banderas, playing the younger brother) and Iván Torres (Martinez, playing the elder brother) to join her for nine days of rehearsals.

The bulk of the film observes Lola, Félix, and Ivan feeling out the characters, getting to know one another, projecting their neuroses onto each other and the material, and occasionally playing mind games. Félix is a Banderas-like movie star who has played a lot of action film roles but also has earned numerous awards for his skill at screen acting (including two Golden Globes and five Goyas). He makes a great and perfect entrance, pulling up to the rehearsal facility in a red convertible sports car driven by a gorgeous young blonde woman. Iván is older and more settled: he has a 40-year-old daughter from his first marriage and has been married to his second wife for 28 years. He's more grizzled, a character actor-type, associated with academia and institutions. We see him teaching classes to rapt students and holding forth on the philosophy of performance.

Each man has hang-ups, triggers and superstitions, and is deeply annoyed by the other's methods and rituals. The difference in approach between the two leading men can be summed up by that much-cited story of Laurence Olivier finding out that his "Marathon Man" costar Dustin Hoffman had stayed up for three days to get in the headspace of a character who'd been up for three days and telling him, "My dear boy, why don't you just try acting? It's so much easier." What's fun, though, is that depending on the scene, either actor can be Olivier or Hoffman.

Lola, meanwhile, evokes notorious American New Wave or European Art Cinema directors who play games with actors' minds. She thinks she can't get at The Truth unless she puts her performers through exercises that are theoretically intended to explore the script but that often play like sadistic and arbitrary exercises of power. There's one in the middle of the movie that's so upsetting that you immediately begin hoping it's a joke. The film does this kind of thing multiple times, and although it never quite turns "Official Competition" into a David Mamet-style mind game on the audience, a certain repetitiveness starts to creep in by the two-thirds mark. Still, the acting and directing are strong enough to carry the story to the finish line.

The film's main goal is to make us laugh and pull the rug out out from under us. But while there's a bit of pathos here and there, the movie doesn't add up to much in the end. The insights into acting, directing, and the creative process won't surprise anyone who reads behind-the-scenes accounts of film shoots (or watches HBO's "Barry"). It's a light movie, all things considered, but as Willy Wonka reminded us, candy doesn't have to have a purpose. If it did, it wouldn't be candy. 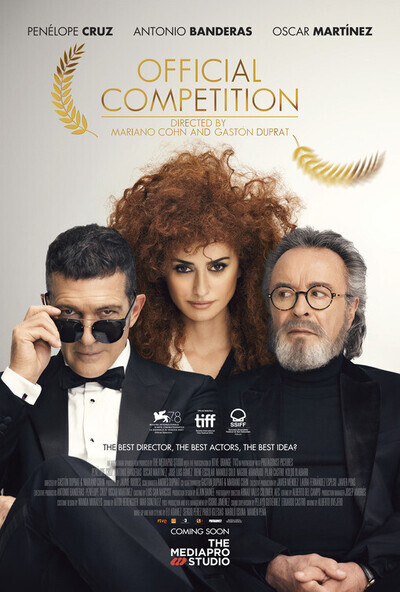 Rated R for language and some nudity.