UPDATED (08/01/12): Scroll to the bottom of this entry to see my first impressions of the newly announced critics' and directors' poll results.

Vittorio De Sica's "Bicycle Thieves" (1948) topped the first Sight & Sound critics' poll in 1952, only four years after it was first released, dropped to #7 in 1962, and then disappeared from the top ten never to be seen again. (In 2002 only five of the 145 participating critics voted for it.) Orson Welles' "Citizen Kane" (1941) flopped in its initial release but was rediscovered in the 1950s after RKO licensed its films to television in 1956. From 1962 to 2002 "Kane" has remained at the top of the poll (46 critics voted for it last time). This year, a whopping 846 top-ten ballots (mentioning 2,045 different titles) were counted, solicited from international "critics, programmers, academics, distributors, writers and other cinephiles" -- including bloggers and other online-only writers. Sight & Sound has announced it will live-tweet the 2012 "Top 50 Greatest Films of All Time" (@SightSoundmag #sightsoundpoll) August 1, and as I write this the night before, I of course don't know the results. But, for now at least, I'm more interested in the process.

Given the much wider and younger selection of voters in 2012, ist-watchers have been speculating: Will another movie (leading candidate: Alfred Hitchcock's "Vertigo," number 2 in 2002) supplant "Kane" at the top of the list? Will there be any silent films in the top 10? (Eisenstein's "Battleship Potemkin" and Murnau's "Sunrise" tied for #7 on the 2002 list, but the latter was released in 1927 with a Fox Movietone sound-on-film musical score and sound effects.)

Though there's been no rule about how much time should pass between a film's initial release and its eligibility (the Library of Congress's National Film Registry requires that selections be at least ten years old), most of the selections ten to have stood the test of time for at least a decade or two. The newest film on the 2002 list was the combination of "The Godfather" (1972) and "The Godfather, Part II" (1974) -- but they won't be allowed to count as one title for 2012.

It's strange to think that this accountants'-reflex, oligarchical canon-building phenomenon had never occurred to anyone before Elizabeth became queen - not regarding any cultural product, at least. There had never been, apparently, year-end 'ten best' lists of books or plays during the 19th and early 20th centuries, nor had there been, then or before, any effort to collect and collate expert opinions about 'the greatest ever' of anything. [...]

There may be no underestimating the difference between being disappointed by a classic viewed in a shabby repertory cinema on a beat-up print in the 1970s, and being awakened to it today on your state-of-the-art home screen, after a good digital shave-and-haircut restoration. Take "L'Atalante" (1934), for example: after having just scraped in at no. 10 in 1962, it appeared mid-list in 1992 entirely thanks to Gaumont's 1989 revamp and subsequent rerelease. By 2002, its glamour had already worn off, and its stock dropped once again.

That seems like a reasonable way to interpret it, but I wonder how accurate it really is. I mean, if "Citizen Kane" were to drop a few slots after 50 years, does that really indicate that its statue as a work of art is declining after 50 years at #1? Or are these kinds of variations just built into the nature of these kinds of polls? I saw someone predict that Quentin Tarantino's "Pulp Fiction" would make it into the all-time top 10 this time around. I guess it's possible, but if it happened, would that indicate that the movie's reputation had increased significantly between 2002 and 2012? I don't think so. If anything, I'd say the hype has cooled since the 1990s (how could it have gotten any hotter?). "Reservoir Dogs," on the other hand, is probably better regarded now than it was when it was released -- and, I'd argue, rightly so. Anyway, that's just my own speculation.

Atkinson, I think, summarizes the situation perfectly. On the one hand:

... as we commonly acknowledge, we need films to acquire a few barnacles with the passing of time before we anoint them. How will we know whether or not our first glowing reaction to "Uncle Boonmee Who Can Recall His Past Lives" (2010) will wilt within a few years?

And on the other:

If you scan back over the history of the Sight & Sound poll, as well as the Oscars and every qualitative ballot-collection in between, it becomes clear that such contests are not definitive preservers of posterity deciding once and for all (but over and over again) what's 'best'.

They are, in fact, snapshots of the zeitgeist in flux - a family photo of film culture's priorities and tendencies in that year, and that is all. So, why not treat them as such, and vote your passion? Are we so sure that "Uncle Boonmee," for instance, isn't as mysterious and resonant and fascinating as "Ugetsu monogatari" (1953), or that "Once upon a Time in Anatolia" isn't in fact superior to Antonioni?

Last spring, Kristin Thompson suggested a poll method a little more like the National Film Registry (or, for that matter, the Rock & Roll Hall of Fame):

I think this business of polls and lists for the greatest films of all times would be much more interesting if each film could only appear once. Having gained the honor of being on the list, each title could be retired, and a whole new set concocted ten years later. The point of such lists, if there is one, is presumably to introduce people who are interested in good films to new ones they may not have seen or even known about.

Kristin's assessment of "the point" of these exercises is the one most people would probably cite if you asked them why they would care about looking over a list of "The Greatest Movies Ever Made," or some such thing. We like good movies, and we like to be equipped to participate in the cultural conversation, so we like to discover movies that experts recommend, and that may broaden our horizons. If you're not interested in those things, you don't have much reason to care about these lists.

Sight & Sound editor Nick James explained the goals and the process this way in his e-mail invitation to participants:

We realise that this is not the easiest of tasks, but we want you to know that this is a major worldwide endeavour that will help us all to remind people of film's rich history and to refine what we mean by the best of cinema.

Please draw up a list of ten films only, in order of preference or, if you'd rather, alphabetically. The order does not matter to the voting system - we will allot one vote only to each of your ten films. We also invite you to add a short commentary after the list explaining why you have chosen the films in your top ten.

As for what we mean by 'Greatest', we leave that open to your interpretation. You might choose the ten films you feel are most important to film history, or the ten that represent the aesthetic pinnacles of achievement, or indeed the ten films that have had the biggest impact on your own view of cinema.

When it comes to grouped films, such as the "Godfather" series, please choose by individual film alone ("The Godfather" or "Godfather II" etc.) You cannot vote for, say, the "Three Colours Trilogy" unless you want to use up three choices out of ten.

For what it's worth, here's my list from 2002, in alphabetical order. I will discuss my 2012 list once Sight & Sound publishes it:

OK, so by the time you read this the Top 50 may already have been announced and that will give us something else to talk about. But don't forget about the National Film Registry. You can submit up to 50 titles yourself, just by going here and checking out a list of titles that, unbelievably, still aren't on the registry. Here, for what it's worth, is the impulsive list I sent in a couple weeks ago: 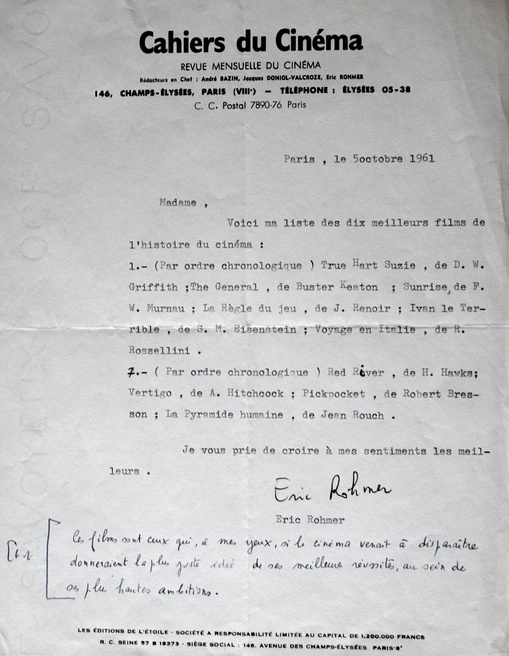 3-4 August: our redesigned and expanded September 2012 special poll issue is sent to subscribers, and should be available on newsstands (on Friday 3rd in London, and across the UK by Saturday 4th). The 136-page issue features the critics' Top 100, a new essay on the top film, short essays on every film in our top 10, an essay on changing critical tastes in our poll, top 10s by decade, nationality and genre, the directors' Top Ten, the critics' top directors and directors' top directors, and individual top-ten entries from 100 critics and 100 directors, from Woody Allen to Edgar Wright.

7 August: the September 2012 issue is available to download as a Digital Edition - as an individual purchase from Apple's Newsstand, or by subscription from our Subscriptions Bureau.

15 August: the complete critics' poll of 846 entries is published in interactive form on this website.

A few notes on the latest results:

"Official Masterpieces" for certain directors (although I'd choose different titles):

"Tokyo Story" (Ozu, 1953) -- #3 with critics; #1 with directors. Kristin Thompson wrote last spring of its place in the S&S poll: "Ozu's first film to became well known in the west didn't make the list until decades later, in 1992, and yet despite the discovery of 'Late Spring' and 'Early Summer' and 'An Autumn Afternoon,' 'Tokyo Story' remains the Ozu film."

Chaplin ("City Lights," in a three-way tie for #50 with critics) has almost fallen out of the Top 50. Perhaps because his filmmaking has always been secondary to his persona? Also, whatever happened to former favorites "Modern Times" (my own Chaplin of choice), "The Gold Rush" and "Monsieur Verdoux"?