By the time this exchange takes place, deep inside Michelangelo Antonioni's "L'Avventura," the conversation has nothing to do with love. It is more like an attempt to pass the time--like a game of solitaire, or flipping a coin. There is not even the possibility that the characters are in love, can love, have loved, will love. "Too shallow to be truly lonely," Pauline Kael wrote, "they are people trying to escape their boredom by reaching out to one another and finding only boredom once again."

"L'Avventura" created a stir in 1960, when Kael picked it as the best film of the year. It was seen as the flip side of Fellini's "La Dolce Vita." Both directors were Italian, both depicted their characters in a fruitless search for sensual pleasure, both films ended at dawn with emptiness and soul-sickness. But Fellini's characters, who were middle-class and had lusty appetites, at least were hopeful on their way to despair. For Antonioni's idle and decadent rich people, pleasure is anything that momentarily distracts them from the lethal ennui of their existence. Kael again: "The characters are active only in trying to discharge their anxiety: Sex is their sole means of contact."

The plot of "L'Avventura" became famous because, it was said, nothing happened in the movie. What we saw was a search without a conclusion, a disappearance without a solution. The title in English means "The Adventure," and it was not hard to imagine Antonioni's dry smile as he penned those words on the first page of his screenplay.

A group of wealthy friends are cruising the sea near Sicily on a yacht. They anchor near an island, swim ashore and begin to explore. Anna (Lea Massari) has quarreled with her lover Sandro (Gabriele Ferzetti), and has been overheard saying she wanted to be left alone. They both go ashore, along with her friend Claudia (Monica Vitti) and others. After a time Anna cannot be found. The others search the island for her; it is mostly rocks and scrubby trees, and there seem few places to hide, but she cannot be found.

And she is never seen again. If "L'Avventura" were a conventional movie, you would be furious with me for revealing this information, because you would assume the movie was about the search for Anna. It is not. It is about the sense in which all of the characters are on the brink of disappearance; their lives are so unreal and their relationships so tenuous they can barely be said to exist. They are like bookmarks in life: holding places, but not involved in the story.

The yacht is sent to bring help. As Anna's friends comb the island, Aldo Scavarda's cinematography is haunting: Humans are placed off-center in compositions, as if the rocks have been there forever and these visitors are likely to slip off into the sea--or the sky, or shadows. They hear a boat, far away. There is a teasing shot in which we see it--or almost see it. Did Anna leave on it? Later, perhaps, they hear another boat.

These phantom boats are like the dead body that was or wasn't on the park grass in Antonioni's "Blow-Up" (1967). The 1975 Australian film "Picnic at Hanging Rock" is also about a person consumed by a landscape. The effect of Anna's disappearance is disquieting; we want to know there either was a boat or wasn't a boat, and Anna either did or didn't leave on it. The film remains slippery. Eventually the yacht returns with the police and Anna's father (who seems unhappy to be called away from his responsibilities for something insignificant like the disappearance of a child).

Then there is a scene that is shocking in two ways: First because it occurs at all, and second because it hardly seems to occur--it's like the ghost-boat we're not sure we saw. The party has returned to the yacht, and Sandro, Anna's lover, grabs Claudia, her friend, and kisses her. Claudia pulls away. The moment passes. What is she thinking? Is she disgusted that he would so soon betray Anna? It is impossible to know.

On shore, Sandro makes a report at police headquarters and follows Claudia onto a train. He says he loves her. Later they are joined by other friends, including Gloria (Dorothy De Poliolo), a sexy writer who walks oblivious through working-class streets where the men and boys boldly ogle her, accepting their attention as if it is the weather. There is an interesting point being made here: She is at pains to present herself as sexy, but has forgotten why she does that. She dresses and moves out of a memory of a time when she cared what men thought of her. They still think, but she has burned out her ability to care.

Claudia accepts Sandro as her lover. Anna is forgotten. Neither mourns her. She served a function (lover, friend), and now that she is gone, that function must be filled by another. They check into a hotel room together, and while the bellboy is watching Sandro tries to kiss Claudia, but when the bellboy has gone Sandro doesn't try again. He goes down to a party in the hotel. Claudia sleeps, wakes, runs down the corridor, hoping (or afraid) that Anna has returned. She finds Sandro downstairs, sprawled on a sofa with a prostitute. She runs outside. As Sandro rises, the hooker asks for a souvenir--French for a memory--and he throws bills down at her body. Outside, the empty dawn.

When "L'Avventura" was released, it became a joke to refer to "Antonioniennui." At its premiere at the Cannes festival, the audience booed, but it won the Jury Prize and became a box-office success all over the world. It was the most pure and stark of several films about characters who drifted in existential limbo. In America, it came at a time when beatniks cultivated detachment, when modern jazz kept an ironic distance from melody, when it was hip to be cool. That whole time came crashing down later in the 1960s, but while it lasted, "L'Avventura" was its anthem.

I did not much connect with the film when I saw it first--how could I, at 18? These people were bored by a lifestyle beyond my wildest dreams. When I taught the film in a class 15 years later, it seemed affected and contrived, a feature-length idea but not a movie. Only recently, seeing it again, did I realize how much clarity and passion Antonioni brought to the film's silent cry of despair.

His characters were parasites whose money allowed them to clear away the distractions of work, responsibility, goals and purposes, and exposed the utter emptiness within. It is possible to be rich and happy, of course, but for that you need a mind, and interests. It is impossible to be happy simply because one is ceaselessly entertained. "L'Avventura" becomes a place in our imagination--a melancholy moral desert.

Why don't we have movies like "L'Avventura" anymore? Because we don't ask the same kinds of questions anymore. We have replaced the "purpose of life” with the "choice of lifestyle.” I used to think Peggy Lee's "Is That All There Is?" was the saddest song. Antonioni can think of a sadder one: "More." 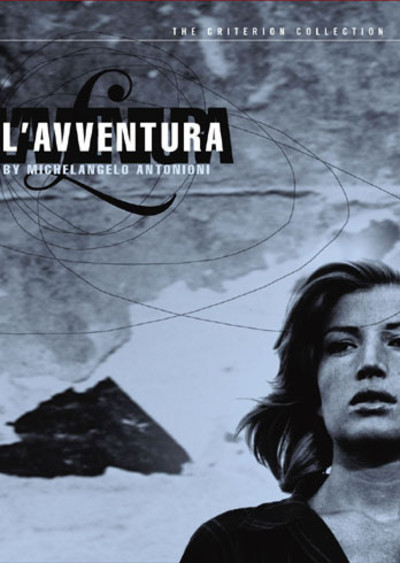