“I don't think any word can explain a man's life,” says one of the searchers through the warehouse of treasures left behind by Charles Foster Kane. Then we get the famous series of shots leading to the closeup of the word “Rosebud” on a sled that has been tossed into a furnace, its paint curling in the flames. We remember that this was Kane's childhood sled, taken from him as he was torn from his family and sent east to boarding school.

Rosebud is the emblem of the security, hope and innocence of childhood, which a man can spend his life seeking to regain. It is the green light at the end of Gatsby's pier; the leopard atop Kilimanjaro, seeking nobody knows what; the bone tossed into the air in “2001.” It is that yearning after transience that adults learn to suppress. “Maybe Rosebud was something he couldn't get, or something he lost,” says Thompson, the reporter assigned to the puzzle of Kane's dying word. “Anyway, it wouldn't have explained anything.” True, it explains nothing, but it is remarkably satisfactory as a demonstration that nothing can be explained. “Citizen Kane” likes playful paradoxes like that. Its surface is as much fun as any movie ever made. Its depths surpass understanding. I have analyzed it a shot at a time with more than 30 groups, and together we have seen, I believe, pretty much everything that is there on the screen. The more clearly I can see its physical manifestation, the more I am stirred by its mystery.

It is one of the miracles of cinema that in 1941 a first-time director; a cynical, hard-drinking writer; an innovative cinematographer, and a group of New York stage and radio actors were given the keys to a studio and total control, and made a masterpiece. “Citizen Kane” is more than a great movie; it is a gathering of all the lessons of the emerging era of sound, just as “Birth of a Nation” assembled everything learned at the summit of the silent era, and “2001” pointed the way beyond narrative. These peaks stand above all the others.

The origins of “Citizen Kane” are well known. Orson Welles, the boy wonder of radio and stage, was given freedom by RKO Radio Pictures to make any picture he wished. Herman Mankiewicz, an experienced screenwriter, collaborated with him on a screenplay originally called “The American.” Its inspiration was the life of William Randolph Hearst, who had put together an empire of newspapers, radio stations, magazines and news services, and then built to himself the flamboyant monument of San Simeon, a castle furnished by rummaging the remains of nations. Hearst was Ted Turner, Rupert Murdoch and Bill Gates rolled up into an enigma.

Arriving in Hollywood at age 25, Welles brought a subtle knowledge of sound and dialogue along with him; on his Mercury Theater of the Air, he'd experimented with audio styles more lithe and suggestive than those usually heard in the movies. As his cinematographer he hired Gregg Toland, who on John Ford's “The Long Voyage Home” (1940) had experimented with deep focus photography--with shots where everything was in focus, from the front to the back, so that composition and movement determined where the eye looked first. For his cast Welles assembled his New York colleagues, including Joseph Cotten as Jed Leland, the hero's best friend; Dorothy Comingore as Susan Alexander, the young woman Kane thought he could make into an opera star; Everett Sloane as Mr. Bernstein, the mogul's business wizard; Ray Collins as Gettys, the corrupt political boss, and Agnes Moorehead as the boy's forbidding mother. Welles himself played Kane from age 25 until his deathbed, using makeup and body language to trace the progress of a man increasingly captive inside his needs. “All he really wanted out of life was love,” Leland says. “That's Charlie's story--how he lost it.”

The structure of “Citizen Kane” is circular, adding more depth every time it passes over the life. The movie opens with newsreel obituary footage that briefs us on the life and times of Charles Foster Kane; this footage, with its portentous narration, is Welles' bemused nod in the direction of the “March of Time” newsreels then being produced by another media mogul, Henry Luce. They provide a map of Kane's trajectory, and it will keep us oriented as the screenplay skips around in time, piecing together the memories of those who knew him.

Curious about Kane's dying word, “rosebud,” the newsreel editor assigns Thompson, a reporter, to find out what it meant. Thompson is played by William Alland in a thankless performance; he triggers every flashback, yet his face is never seen. He questions Kane's alcoholic mistress, his ailing old friend, his rich associate and the other witnesses, while the movie loops through time. As often as I've seen “Citizen Kane,” I've never been able to firmly fix the order of the scenes in my mind. I look at a scene and tease myself with what will come next. But it remains elusive: By flashing back through the eyes of many witnesses, Welles and Mankiewicz created an emotional chronology set free from time.

The movie is filled with bravura visual moments: the towers of Xanadu; candidate Kane addressing a political rally; the doorway of his mistress dissolving into a front-page photo in a rival newspaper; the camera swooping down through a skylight toward the pathetic Susan in a nightclub; the many Kanes reflected through parallel mirrors; the boy playing in the snow in the background as his parents determine his future; the great shot as the camera rises straight up from Susan's opera debut to a stagehand holding his nose, and the subsequent shot of Kane, his face hidden in shadow, defiantly applauding in the silent hall.

Along with the personal story is the history of a period. “Citizen Kane” covers the rise of the penny press (here Joseph Pulitzer is the model), the Hearst-supported Spanish-American War, the birth of radio, the power of political machines, the rise of fascism, the growth of celebrity journalism. A newsreel subtitle reads: “1895 to 1941. All of these years he covered, many of these he was.” The screenplay by Mankiewicz and Welles (which got an Oscar, the only one Welles ever won) is densely constructed and covers an amazing amount of ground, including a sequence showing Kane inventing the popular press; a record of his marriage, from early bliss to the famous montage of increasingly chilly breakfasts; the story of his courtship of Susan Alexander and her disastrous opera career, and his decline into the remote master of Xanadu (“I think if you look carefully in the west wing, Susan, you'll find about a dozen vacationists still in residence”).

“Citizen Kane” knows the sled is not the answer. It explains what Rosebud is, but not what Rosebud means. The film's construction shows how our lives, after we are gone, survive only in the memories of others, and those memories butt up against the walls we erect and the roles we play. There is the Kane who made shadow figures with his fingers, and the Kane who hated the traction trust; the Kane who chose his mistress over his marriage and political career, the Kane who entertained millions, the Kane who died alone.

There is a master image in “Citizen Kane” you might easily miss. The tycoon has overextended himself and is losing control of his empire. After he signs the papers of his surrender, he turns and walks into the back of the shot. Deep focus allows Welles to play a trick of perspective. Behind Kane on the wall is a window that seems to be of average size. But as he walks toward it, we see it is further away and much higher than we thought. Eventually he stands beneath its lower sill, shrunken and diminished. Then as he walks toward us, his stature grows again. A man always seems the same size to himself, because he does not stand where we stand to look at him. 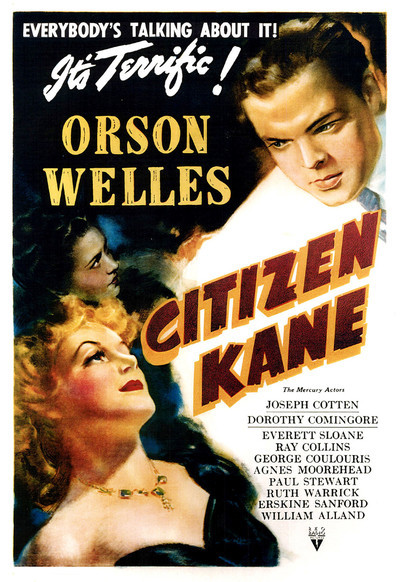