The hero of Alfred Hitchcock's "Rear Window" is trapped in a wheelchair, and we're trapped, too--trapped inside his point of view, inside his lack of freedom and his limited options. When he passes his long days and nights by shamelessly maintaining a secret watch on his neighbors, we share his obsession. It's wrong, we know, to spy on others, but after all, aren't we always voyeurs when we go to the movies? Here's a film about a man who does on the screen what we do in the audience--look through a lens at the private lives of strangers.

The man is a famous photographer named L.B. Jeffries--"Jeff" to his fiancée. He's played by James Stewart as a man of action who has been laid up with a broken leg and a heavy cast that runs all the way up to his hip. He never leaves his apartment and has only two regular visitors. One is his visiting nurse Stella (Thelma Ritter), who predicts trouble ("the New York State sentence for a Peeping Tom is six months in the workhouse"). The other is his fiancée, Lisa Fremont (Grace Kelly), an elegant model and dress designer, who despairs of ever getting him to commit himself. He would rather look at the lives of others than live inside his own skin, and Stella lectures him, "What people ought to do is get outside their own house and look in for a change."

Jeff's apartment window shares a courtyard with many other windows (all built on a single set by Hitchcock), and as the days pass he becomes familiar with some of the other tenants. There is Miss Lonelyhearts, who throws dinner parties for imaginary gentleman callers; and Miss Torso, who throws drinks parties for several guys at a time; and a couple who lower their beloved little dog in a basket to the garden, and a composer who fears his career is going nowhere. And there is Thorvald (Raymond Burr), a man with a wife who spends all her days in bed and makes life miserable for him. One day the wife is no longer to be seen, and by piecing together several clues (a saw, a suitcase, a newly dug spot in Thorvald's courtyard garden), Jeff begins to suspect that a murder has taken place.

The way he determines this illustrates the method of the movie. Rarely has any film so boldly presented its methods in plain view. Jeff sits in his wheelchair, holding a camera with a telephoto lens, and looks first here and then there, like a movie camera would. What he sees, we see. What conclusions he draws, we draw--all without words, because the pictures add up to a montage of suspicion.

In the earliest days of cinema, the Russian director Kuleshov performed a famous experiment in which he juxtaposed identical shots of a man's face with other shots. When the man was matched with food, audiences said the man looked hungry, and so on. The shots were neutral. The montage gave them meaning. "Rear Window" (1954) is like a feature-length demonstration of the same principle, in which the shots assembled in Jeff's mind add up to murder.

I sometimes fancy that various archetypal situations circled tirelessly in Hitchcock's mind, like whales in a tank at the zoo. One of them was fascination of voyeurism--of watching people who do not know they are being watched. Another, famously, was the notion of an innocent man wrongly accused. And many of his films illustrate male impotence or indifference in the face of cool blond beauty. Much is said of Hitchcock's blonds (Kim Novak, Eva Marie Saint, Grace Kelly, Tippi Hedren), but observe that they are not erotic playmates so much as puzzles or threats. Lisa, the Kelly character, has a hopeless love for Jeff, who keeps her at arm's length with descriptions of his lifestyle; a fashion model wouldn't hold up in the desert or jungle, he tells her.

But perhaps his real reason for keeping her away is fear of impotence, symbolized by the leg cast, and we are reminded of the strikingly similar relationship between Scotty, the Stewart character in "Vertigo," and the fashion illustrator played by Barbara Bel Geddes. She, too, loves him. He keeps his distance. She sympathizes with his vertigo, as Kelly nurses the broken leg. Both observe his voyeuristic obsessions. In "Vertigo," Scotty falls in love with a woman he has spied upon but never spoken to. In "Rear Window," he is in love with the occupation of photography, and becomes completely absorbed in reconstructing the images he has seen through his lens. He wants what he can spy at a distance, not what he can hold in his arms.

Stewart is an interesting choice to play these characters. In the 1930s and 1940s he played in light comedy, romances, crime stories and Westerns, almost always as a character we liked. After the war, he revealed a dark side in the fantasy scenes of Capra's "It's a Wonderful Life," and Hitchcock exploited that side, distant and cold, in "Rope," "The Man Who Knew Too Much," "Vertigo" and "Rear Window." To understand the curious impact of these roles, consider Tom Hanks, whose everyman appeal is often compared to Jimmy Stewart's. What would it feel like to see him in a bizarre and twisted light?

In "Rear Window," Jeff is not a moralist, a policeman or a do-gooder, but a man who likes to look. There are crucial moments in the film where he is clearly required to act, and he delays, not because he doesn't care what happens, but because he forgets he can be an active player; he is absorbed in a passive role. Significantly, at the end, when he is in danger in his own apartment, his weapon is his camera's flashgun; he hopes to blind or dazzle his enemy, and as the man's eyesight gradually returns, it is through a blood-red dissolve that suggests passion expressed through the eyes.

Kelly is cool and elegant here, and has some scenes where we feel her real hurt. She likes to wear beautiful dresses, make great entrances, spoil Jeff with champagne and catered dinners. He doesn't notice or doesn't like her attention, because it presumes a relationship he wants to elude. There is one shot, partly a point-of-view closeup, in which she leans over him to kiss him, and the camera succumbs to her sexuality even if Jeff doesn't; it's as if she's begging the audience to end its obsession with what Jeff is watching, and consider instead what heshouldbe drinking in with his eyes--her beauty.

The remote-control suspense scenes in "Rear Window" are Hitchcock at his most diabolical, creating dangerous situations and then letting Lisa and Stella linger in them through Jeff's carelessness or inaction. He stays in his wheelchair. They venture out into danger--Kelly even entering the apartment of the suspected wife killer. He watches. We see danger approaching. We, and he, cannot move, cannot sound the alarm.

This level of danger and suspense is so far elevated above the cheap thrills of the modern slasher films that "Rear Window," intended as entertainment in 1954, is now revealed as art. Hitchcock long ago explained the difference between surprise and suspense. A bomb under a table goes off, and that's surprise. We know the bomb is under the table but not when it will go off, and that's suspense. Modern slasher films depend on danger that leaps unexpectedly out of the shadows. Surprise. And surprise that quickly dissipates, giving us a momentary rush but not satisfaction. "Rear Window" lovingly invests in suspense all through the film, banking it in our memory, so that when the final payoff arrives, the whole film has been the thriller equivalent of foreplay.

Rita Moreno: Just a Girl Who Decided to Go for It 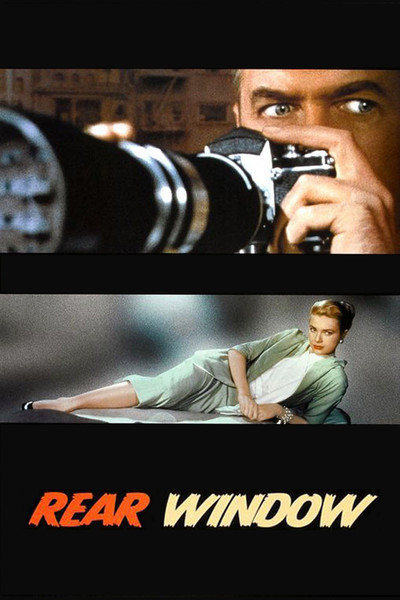 Thelma Ritter as Stella, the nurse