Are you talkin' to me? Well, I'm the only one here. --Travis Bickle in "Taxi Driver"

It is the last line, "Well, I'm the only one here," that never gets quoted. It is the truest line in the film. Travis Bickle exists in "Taxi Driver" as a character with a desperate need to make some kind of contact somehow--to share or mimic the effortless social interaction he sees all around him, but does not participate in.

This utter aloneness is at the center of "Taxi Driver," one of the best and most powerful of all films, and perhaps it is why so many people connect with it even though Travis Bickle would seem to be the most alienating of movie heroes. We have all felt as alone as Travis. Most of us are better at dealing with it.

Martin Scorsese's 1976 film (re-released in theaters and on video in 1996 in a restored color print, with a stereophonic version of the Bernard Herrmann score) is a film that does not grow dated, or over-familiar. I have seen it dozens of times. Every time I see it, it works; I am drawn into Travis' underworld of alienation, loneliness, haplessness and anger.

It is a widely known item of cinematic lore that Paul Schrader's screenplay for "Taxi Driver" was inspired by "The Searchers," John Ford's 1956 film. In both films, the heroes grow obsessed with "rescuing" women who may not, in fact, want to be rescued. They are like the proverbial Boy Scout who helps the little old lady across the street whether or not she wants to go.

"The Searchers" has Civil War veteran John Wayne devoting years of his life to the search for his young niece Debbie (Natalie Wood), who has been kidnapped by Commanches. The thought of Debbie in the arms of an Indian grinds away at him. When he finally finds her, she tells him the Indians are her people now, and runs away. Wayne then plans to kill the girl, for the crime of having become a "squaw." But at the end, finally capturing her, he lifts her up (in a famous shot) and says, "Let's go home, Debbie."

The dynamic here is that Wayne has forgiven his niece, after having participated in the killing of the people who, for 15 years or so, had been her family. As the movie ends, the niece is reunited with her surviving biological family, and the last shot shows Wayne silhouetted in a doorway, drawn once again to the wide open spaces. There is, significantly, no scene showing us how the niece feels about what has happened to her.

In "Taxi Driver," Travis Bickle also is a war veteran, horribly scarred in Vietnam. He encounters a 12-year-old prostitute named Iris (Jodie Foster), controlled by a pimp named Sport (Harvey Keitel). Sport wears an Indian headband. Travis determines to "rescue" Iris, and does so, in a bloodbath that is unsurpassed even in the films of Scorsese. A letter and clippings from the Steensmas, Iris' parents, thank him for saving their girl. But a crucial earlier scene between Iris and Sport suggests that she was content to be with him, and the reasons why she ran away from home are not explored.

The buried message of both films is that an alienated man, unable to establish normal relationships, becomes a loner and wanderer, and assigns himself to rescue an innocent young girl from a life that offends his prejudices. In "Taxi Driver," this central story is surrounded by many smaller ones, all building to the same theme. The story takes place during a political campaign, and Travis twice finds himself with the candidate, Palatine, in his cab. He goes through the motions of ingratiating flattery, but we, and Palatine, sense something wrong.

Shortly after that Travis tries to "free" one of Palatine's campaign workers, a blonde he has idealized (Cybill Shepherd), from the Palatine campaign. That goes wrong with the goofy idea of a date at a porno movie. And then, after the fearsome rehearsal in the mirror, he becomes a walking arsenal and goes to assassinate Palatine. The Palatine scenes are like dress rehearsals for the ending of the film. With both Betsy and Iris, he has a friendly conversation in a coffee shop, followed by an aborted "date," followed by attacks on the men he perceived as controlling them; he tries unsuccessfully to assassinate Palatine, and then goes gunning for Sport.

There are undercurrents in the film that you can sense without quite putting your finger on them. Travis' implied feelings about blacks, for example, which emerge in two long shots in a taxi driver's hangout, when he exchanges looks with a man who may be a drug dealer. His ambivalent feelings about sex (he lives in a world of pornography, but the sexual activity he observes in the city fills him with loathing). His hatred for the city, inhabited by "scum." His preference for working at night, and the way Scorsese's cinematographer, Michael Chapman, makes the yellow cab into a vessel by which Travis journeys the underworld, as steam escapes from vents in the streets, and the cab splashes through water from hydrants--a Stygian passage.

The film has a certain stylistic resonance with "Mean Streets" (1973), the first Scorsese film in which Keitel and De Niro worked together. In the earlier film Scorsese uses varying speeds of slow-motion to suggest a level of heightened observation on the part of his characters, and here that technique is developed even more dramatically; as the taxi drives through Manhattan's streets, we see it in ordinary time, but Travis' point-of-view shots are slowed down: He sees hookers and pimps on the sidewalks, and his heightened awareness is made acute through slow motion.

The technique of slow motion is familiar to audiences, who usually see it in romantic scenes, or scenes in which regret and melancholy are expressed--or sometimes in scenes where a catastrophe looms, and cannot be avoided. But Scorsese was finding a personal use for it, a way to suggest a subjective state in a POV shot. And in scenes in a cab driver's diner, he uses closeups of observed details to show how Travis's attention is apart from the conversation, is zeroing in on a black who might be a pimp. One of the hardest things for a director to do is to suggest a character's interior state without using dialog; one of Scorsese's greatest achievements in "Taxi Driver" is to take us inside Travis Bickle's point of view.

There are other links between "Mean Streets" and "Taxi Driver" that may go unnoticed. One is the "priest's-eye-view" often used in overhead shots, which Scorsese has said are intended to reflect the priest looking down at the implements of the Mass on the altar. We see, through Travis' eyes, the top of a taxi dispatcher's desk, candy on a movie counter, guns on a bed, and finally, with the camera apparently seeing through the ceiling, an overhead shot of the massacre in the red-light building. This is, if you will, the final sacrifice of the Mass. And it was in "Mean Streets" that Keitel repeatedly put his finger in the flame of a candle or a match, testing the fires of hell: here De Niro's taxi driver holds his fist above a gas flame.

There has been much discussion about the ending, in which we see newspaper clippings about Travis' "heroism," and then Betsy gets into his cab and seems to give him admiration instead of her earlier disgust. Is this a fantasy scene? Did Travis survive the shoot-out? Are we experiencing his dying thoughts? Can the sequence be accepted as literally true?

I am not sure there can be an answer to these questions. The end sequence plays like music, not drama: It completes the story on an emotional, not a literal, level. We end not on carnage but on redemption, which is the goal of so many of Scorsese's characters. They despise themselves, they live in sin, they occupy mean streets, but they want to be forgiven and admired. Whether Travis gains that status in reality or only in his mind is not the point; throughout the film, his mental state has shaped his reality, and at last, in some way, it has brought him a kind of peace. 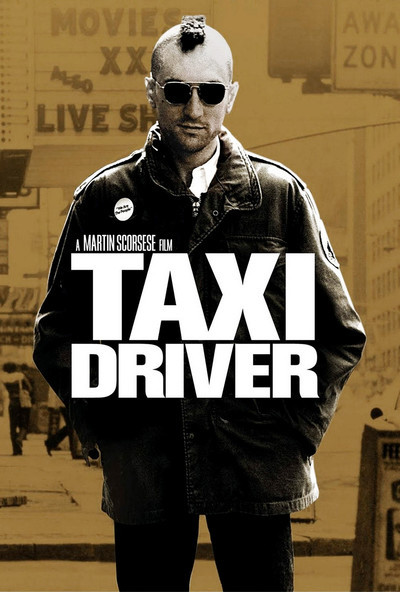 Rated R for violence and profanity