To live happily ever after with the one you love, you must be able to live with them at all. It is not that simple. Little problems must be worked out. She does not like cats on the table while she is eating. He has a closet filled with a year's dirty laundry. She treasures their private moments together. He treasures his best friend, who is bearded and garrulous and arrives at meals in an undershirt. She wants to see Paris. He worries about his work. You see how it is.

Jean Vigo's "L'Atalante" (1934) tells such a love story. It is on many lists of the greatest films, a distinction that obscures how down to earth it is, how direct in its story of a new marriage off to a shaky start. The French director Francois Truffaut fell in love with it one Saturday afternoon in 1946, when he was 14: "When I entered the theater, I didn't even know who Jean Vigo was. I was immediately overwhelmed with wild enthusiasm for his work." Hearing a critic attack another movie because "it smells like dirty feet," Truffaut considered that a compliment, and thought of Vigo and the pungent life he evoked on a French canal barge.

Truffaut saw Vigo's life work that afternoon in Paris; it added up to less than 200 minutes. Legends swirled around the director, who died of tuberculosis at 29, just a few months after the premiere. Already famous for "Zero for Conduct" (1933), he was so ill when he made "L'Atalante" during an unusually cold winter that sometimes he directed from a stretcher: "It is easy to conclude that he was in a kind of fever while he worked," Truffaut wrote, and when a friend advised him to guard his health, Vigo replied that "he lacked the time and had to give everything right away."

The film premiered to polite responses in Paris and at the Venice Film Festival; London critics were its first great champions. It was seen for years in a butchered version, chopped down from 89 to 65 minutes, and only in 1990 was it restored. That version is now available on video.

In outline, "L'Atalante" seems a simple story. It begins with the marriage of a young barge captain named Jean and a village girl named Juliette "who always had to do things differently." There is no wedding feast. Still wearing her wedding dress, she holds to a boom and swings on board the barge, to begin life not only with her husband but also with his massive and shambling friend Jules, a sailor who has been to Yokohama and Singapore, but now plies the waterways between Le Havre and Paris. The barge is further crowded by a cabin boy and at least six cats.

Juliette makes the best of her situation. When the cat has kittens in her bed, she strips the sheets over the objections of Jules, who sees no need for such fastidiousness. One night on the radio she hears the magic words, "This is Paris!" She has never been to Paris, or anywhere else. When the barge arrives in the city, Jean tells her to get dressed up for a night on the town--but Jules slips off in search of fleshy pleasures, and they must stay with the boat. Eventually she slips off alone to the city, planning to be back before she is missed. Jean finds her gone and angrily resumes the journey. The barge is missing when she returns. . . .

These details fail to evoke the enchanted quality of "L'Atalante," which is not about what lovers do, but about how they feel--how tender they are, how sensitive and foolish. The film is shot in a poetic way that sees them as the figures in a myth; Atalante is not only the barge name but the name of a Greek goddess who, says Brewer's Dictionary, "being very swift of foot, refused to marry unless the suitor should first defeat her in a race." Can it be that Jean and Juliette were racing away from one another, and he did a better job of it?

The movie's effect comes through the way it evokes specific moments in the life of the young couple, rather than tying them to a plot. They will be the moments that memory illuminates 50 years from now, when everything else has grown vague. Consider their first morning, as the waking couple is serenaded by an accordion and a bargeman's song. The argument over the laundry. An extraordinary moment when old Jules and Juliette are alone in the cabin, and he seems almost ready to assault her, but she distracts him with the dress she is making, and gets him to model it. And how her unexpected cheerfulness (did she even sense any danger?) inspires him to show her the treasures of his life, climaxing with a jar that contains the hands of his best friend ("all that is left of him").

There is a sequence in a canalside bistro where a magician flirts with her, tempts her with pretty scarves, dances with her and enrages Jules. The man paints word pictures of Paris that echo in her imagination until shemustgo see the city for herself--not to be disloyal to Jean, but because she is like a little girl who cannot help herself.

Their separation is so painful for them both. Her early joy turns into fear; her purse is stolen, hawk-faced men make lewd suggestions, the city is no longer magical. Jean holds his head in anguish. And then Vigo releases all the pent-up loneliness with a bold gesture. Earlier, Juliette told Jean that when she put her face into water and opened her eyes, she could see her true love: "I saw you before I met you." Now in desperation Jean plunges into the icy canal, and Juliette's smiling presence swims up before him. "This must count as one of the most dazzling images of a loving woman in the history of the cinema," wrote the novelist Marina Warner.

After Jean climbs back on board, the old man and the cabin boy try to cheer him with music, but he wanders off and, in a heartbreaking shot, embraces a block of ice as if it is his love.

Juliette is played by Dita Parlo, a legendary Berlin-born actress who made 22 films between 1928 and 1939, and one more in 1965. Her other famous role was as the farm woman who takes in the escaped convicts in Renoir's "Grand Illusion" (1937). Madonna's bookSexwas inspired, she said, by Parlo in "L'Atalante." Garboesque in the pale refinement of her face, she seems too elegant to be an untraveled country girl, but that quality works when it is set beside Michel Simon's crusty old Jules.

Simon, not yet 40 when the film was made, looks 60, weathered by salt air and pickled in seaport saloons. Inspired by the sight of the two young lovers kissing, he has his best moment when he demonstrates how he can wrestle, too--and grapples with himself on the deck, while Vigo dissolves between exposures to make him into two lonely ghosts fighting for possession of the same body.

Jean Daste, who plays Jean, conveys the helplessness of a young man who knows he is in love but knows nothing about the practical side of a relationship--how he must see Juliette's needs and intuit what wounds her. Although the film ends with everyone joyously back on board, we doubt, somehow, that we have seen their last fight.

The movie's look is softly poetic. Vigo and his cinematographer, Boris Kaufman, who years later labored for Preminger in Hollywood, shot mostly on location, capturing the cold winter canal landscapes, the smoky bistros, the cramped living quarters, the magnificence of the muscular old barge as water pours into locks to lift it up to Paris. This is the kind of movie you return to like a favorite song, remembering where you were and how it made you feel, and how its feet smelled. 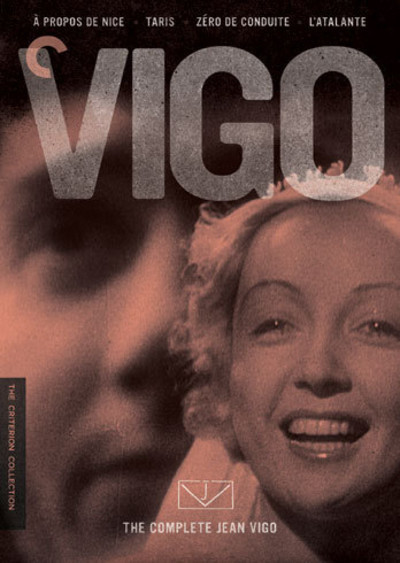