If only one of Charles Chaplin's films could be preserved, “City Lights” (1931) would come the closest to representing all the different notes of his genius. It contains the slapstick, the pathos, the pantomime, the effortless physical coordination, the melodrama, the bawdiness, the grace, and, of course, the Little Tramp--the character said, at one time, to be the most famous image on earth.

When he made it, three years into the era of sound, Chaplin must have known that “City Lights” might be his last silent film; he considered making a talkie, but decided against it, and although the film has a full musical score (composed by Chaplin) and sound effects, it has no speech. Audiences at the time would have appreciated his opening in-joke; the film begins with political speeches, but what emerges from the mouths of the speakers are unintelligible squawks--Chaplin's dig at dialogue. When he made “Modern Times” five years later, Chaplin allowed speech onto the soundtrack, but once again the Tramp remained silent except for some gibberish.

There was perfect logic here: Speech was not how the Tramp really expressed himself. In most silent films there's the illusion that the characters are speaking, even though we can't hear them. Buster Keaton's characters, for example, are clearly talkative. But the Tramp is more of a mime, a person for whom body language serves as speech. He exists somehow on a different plane than the other characters; he stands outside their lives and realities, is judged on his appearance, is homeless and without true friends or family, and interacts with the world mostly through his actions. Although he can sometimes be seen to speak, he doesn't need to; unlike most of the characters in silent films, he could have existed comfortably in a silent world.

In “Modern Times,” as Walter Kerr points out in his invaluable book The Silent Clowns, the Tramp is constantly trying to get back into jail, where he feels safe and secure. His most frequent refuge is a paddy wagon. In “City Lights,” his only friendships are with people who don't or can't see him: with a drunken millionaire who doesn't recognize him when he sobers up, and with a blind flower girl. His shabby appearance sets him apart and cues people to avoid and stereotype him; a tramp is not ... one of us. Unlike the Keaton characters, who have jobs and participate eagerly in society, the Tramp is an outcast, an onlooker, a loner.

That's what makes his relationship with the flower girl (Virginia Cherrill) so poignant; does she accept and treasure him only because she can't see what he looks like? (Her grandmother, who would no doubt warn her away from him, is never at home when the Tramp calls.) The last scene of “City Lights” is justly famous as one of the great emotional moments in the movies; the girl, whose sight has been restored by an operation paid for by the Tramp, now sees him as a bum--but smiles at him anyway, and gives him a rose and some money, and then, touching his hands, recognizes them. “You?” she asks on the title card. He nods, tries to smile, and asks, “You can see now?” “Yes,” she says, “I can see now.” She sees, and yet still smiles at him, and accepts him. The Tramp guessed correctly: She has a good heart, and is able to accept him as himself.

Chaplin and the other silent filmmakers knew no national boundaries. Their films went everywhere without regard for language, and talkies were like the Tower of Babel, building walls between nations. I witnessed the universality of Chaplin's art in one of my most treasured experiences as a moviegoer, in 1972, in Venice, where all of Chaplin's films were shown at the film festival.

One night the Piazza San Marco was darkened, and “City Lights” was shown on a vast screen. When the flower girl recognized the Tramp, I heard much snuffling and blowing of noses around me; there wasn't a dry eye in the piazza. Then complete darkness fell, and a spotlight singled out a balcony overlooking the square. Charlie Chaplin walked forward, and bowed. I have seldom heard such cheering.

He had by then for many decades been hailed as one of the screen's great creators. In “City Lights” we can see the invention and humanity that coexist in his films.

The movie contains some of Chaplin's great comic sequences, including the famous prize fight in which the Tramp uses his nimble footwork to always keep the referee between himself and his opponent. There's the opening scene, where a statue is unveiled to find the Tramp asleep in the lap of a heroic Greco-Roman stone figure. (Trying to climb down, he gets his pants hooked through the statue's sword, and tries to stand at attention during “The Star-Spangled Banner” although his feet can't find a footing.) There's the sequence where he tries to save the millionaire from drowning, and ends up with the rock tied to his own neck; the scene where he swallows a whistle and gathers a following of dogs; the scene where the millionaire and the Tramp encounter burglars; the scene in the nightclub where Charlie sees Apache dancers and defends the woman dancer against her partner.

And there are the bawdy moments, as when the Tramp, working as a street-sweeper, avoids a parade of horses only to encounter a parade of elephants; and when the millionaire pours bottles of champagne down the Tramp's pants.

Chaplin was a master of the small touch, the delayed reaction. Consider the moment when he goes to the blind girl's house to give her the money for an eye operation. He has prudently stashed $100 in his pocket for his own needs, but after she kisses his hand he shrugs, reaches in his pocket, and gives her the final bill.

Chaplin and Keaton are the giants of silent comedy, and in recent years the pendulum of fashion has swung between them. Chaplin ruled supreme for years, but by the 1960s he looked dated and sentimental to some viewers, and Keaton seemed fresher and more contemporary. In the polls taken every 10 years by Sight & Sound, the British film magazine, Chaplin placed high in 1952 and was gone by 1962; Keaton placed high in 1972 and 1982, and Chaplin replaced him again in 1992. The only thing such polls prove for sure is that a lot of film lovers think the work of both men belongs on a list of the 10 greatest films ever made.

Both filmmakers based their work on their fictional personalities, but took opposite approaches. Keaton plays a different character every time; Chaplin usually plays a version of the Tramp. Keaton's characters desire acceptance, recognition, romance and stature in the real world, and try to adapt to conditions; Chaplin's characters are perpetual outsiders who rigidly repeat the same strategies and reactions (often the gags come from how inappropriately the Tramp behaves). Keaton's movements are smooth and effortless; Chaplin's odd little lopsided gait looks almost arthritic. They appeared together only once, in Chaplin's “Limelight” (1952). Keaton steals the scene--but, as Kerr observes, Chaplin, who could have re-edited it to give himself the upper hand, was content to let Keaton prevail.

There was a time when Chaplin was hailed as the greatest popular artist of the 20th century, and his films were known to everyone. Today, how many people watch them? Are they shown in schools? I think not. On TV? Not very often. Silent film, the medium that gave Chaplin his canvas, has now robbed him of his mass audience. His films will live forever, but only for those who seek them out.

Having just viewed “City Lights” and “Modern Times” again, I am still under their spell. Chaplin's gift was truly magical. And silent films themselves create a reverie state; there is no dialogue, no obtrusive super-realism, to interrupt the flow. They stay with you. They are not just a work, but a place.

Most of Chaplin's films are available on video. Children who see them at a certain age don't notice they're “silent” but notice only that every frame speaks clearly to them, without all those mysterious words that clutter other films. Then children grow up, and forget this wisdom, but the films wait patiently and are willing to teach us again. 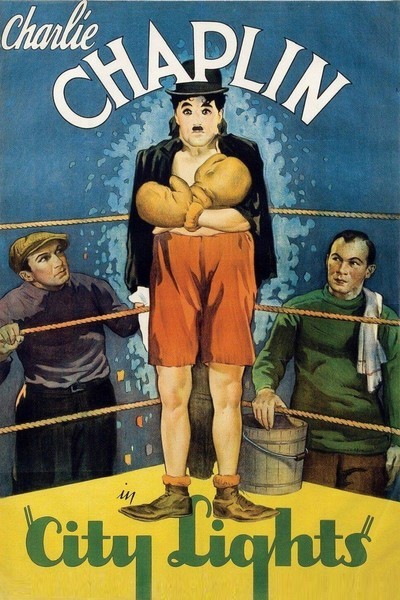 Charles Chaplin as A Tramp

Florence Lee as Her Grandmother