A life of epic suffering

Here is the saddest film I have ever seen about the life of a woman. It begins on a chill dawn when the heroine wanders, her face behind a fan, until encountering some of her fellow prostitutes. "It's hard for a 50-year-old women to pass as 20," she observes. She says it has been a slow night: She was only picked up by an old man, who took her into a candlelit room filled with young men. "Look at this painted face!" he told them. "Do you still want to buy a woman?" To be held up as a moral spectacle is a cruel fate for a woman who has been treated immorally almost every day of her life, and who has always behaved as morally as it was within her power to do.

The women find a friend who has built a fire, and huddle around it. "I heard you served at the palace," another prostitute says. "What has led to your ruin?" Saying "do not ask about my past," she walks away from them and wanders into a Buddhist temple. One of the images of the Buddha dissolves into the face of a young man, and then a flashback begins that will tell Oharu's life from near the beginning.

Her life is the fate in microcosm of many Japanese women for centuries, in a society ruled by a male hierarchy. Kenji Mizoguchi, its director, was as sympathetic with women as any of his contemporaries, even Ozu, who whom he is often ranked. He made prostitutes a frequent subject, as in his "Street of Shame" (1956). He was known to frequent brothels, not simply to purchase favors, but to socialize with their workers; it made a great impression on him that his own sister, Suzo, who raised him, was sold by their father as a geisha. The same thing happens to Oharu in this film.

The character is played by Kinuyo Tanaka, who appeared in 14 of his films, and this one, made in 1952, helped redirect her career from early years as in ingénue toward more challenging roles. One of her strengths as Oharu is her success at playing the same character over a period of 30 years.

As Oharu's flashback begins, we learn she was born in respectable circles, and was a lady in waiting at the court when she and a young page (Toshiro Mifune) fell in love. This was forbidden, the page was condemned to death, and Oharu and his family were exiled. Her father never forgives her for this, and indeed after the scandal she becomes unmarriagable in respectable circles. There is a brief respite when he is able to sell her as a concubine into the household of Lord Matsudaira. Her duty there is to bear him an heir, which she does, but then is coldly sent back into poverty and prostitution. Her father, who now considers her entirely in terms of her wage-earning ability, sells her as a courtesan, at which she balks, and finally sells her into service as a maid to a lady who uses elaborate wigs to conceal from her husband that she is half-bald. She loses this job because one of her employer's customers recognizes her from the shimabara (red-light district) and makes crude jokes which reveal her background.

Now comes a deceptive respite from her misery. She meets a nice man, a maker of fans, and settles in peacefully, but he is killed. She receives no legacy. In a convent, she tells the superior she wanted none: "All I want is to be a nun and be near to Buddha." In the convent, there is an ambiguous scene. A man who knew her comes to demand repayment for a gift of cloth she was given, and in a fury she strips off her clothing and hurls it at him. Her nudity is reflected only in the man's eye, but the discovery of this event leads to her banishment from the convent.

All of this time she dreams of seeing the son she gave birth to, but when this finally happens she is allowed only to get a glimpse of him sweeping past as a grand man, oblivious to her existence. That brings us back to her current life, as a cold, hungry, unsuccessful prostitute.

Although a good deal of the film is shot in a straightforward way, some of it from Ozu's favorite the point of view of a person seated on a tatami mat, Oharu is often seen from a high-angle view well above eye level. In camera grammar this tends to diminish and objectify the subject, and Oharu increasingly comes to seem less like an autonomous character and more like a subject for study--and pity.

"As the story goes," the superior told her on arrival at the convent, "the morning's pretty face is a corpse by evening."

The story as I have outlined it sounds like a lurid melodrama, but "Life of Oharu" studiously avoids taking advantage of the sensational aspects of her life. It is all told as a sad memory of fate, and paced by Mizoguchi to avoid any sensational story climaxes. His attentive use of period locations, costumes and rituals makes his heroine's experiences more like enactments of a ritual. A great deal of the story's pathos comes from the fact that no one except Oharu knows the whole of her life history; she is judged from the outside as an immoral and despicable women, and we realize this is no more than the role society has cast her in, and forces her to play.

We watch the film in disbelief. Surely no women could have such misery thrust upon her through no fault of her own? Mizoguchi makes no attempt to portray any male character--even the father--as a self-aware villain. The men behave within the boundaries set for them and expected of them by the traditions of their society. Even the fan maker does so, but because of the independence given him by his occupation, society allows him more choice--or perhaps simply doesn't care.

Kenji Mizoguchi (1898-1956) is today named as one of the three greatest Japanese directors, along with Akira Kurosawa and Yasujiro Ozu. Kurosawa, considered the most "western" by the Japanese, was the first to gain world wide fame, with such readily accessible films as "Rashomon," "The Seven Samurai" and "Yojimbo." Ozu was considered "too Japanese," until the critic Donald Richie famously took a group of his films to the Venice Film Festival, and found, as he expected, that they had a universal appeal. (My feeling is that the more specific a film is, the more widely it may be understood).

Mizoguchi won Western praise earlier than Ozu. His "Ugetsu Monogatari" (1953) won the Venice Film Festival, and twice appeared on Sight & Sound magazine's ten-yearly poll of the greatest films of all time, which pointed me to him in the early 1970s. But it was "Life of Oharu" that he considered his best film, perhaps because it drew from roots in his own life.

The most influential Western writing on Mizoguchi is an essay by Robert Cohen titled "Why Does Oharu Faint?" The British critic who signs as "Kubla Khan" writes of it: "Oharu faints thrice in 'The Life of Oharu,' and on all occasions, wakes up feeling kinder and more forgiving… Cohen says that Oharu's spiritual transcendence is gained after 'she abandons her gender identity and sexuality,' and in a sense, her victory is only pyrrhic." He adds that is "is far more interesting and appealing than any spiritual excuse that could account for how Oharu has become a saintly character and her fainting spell at the beginning and in the end is more a physical and psychological surrender to the awful life that she has lead till then."

Years before the rise of feminism in the West, the great directors of Japan were obsessed with the lives of women in their society. No woman in a Japanese film that I have seen is more tragic and unforgettable than Oharu.

The film's Criterion edition is streaming on Hulu Plus. It can be viewed in in nine parts via non-Criterion but quite good edition on YouTube. Mizoguchi's "Ugetsu" and "Sansho the Bailiff" are also written about in my Great Movies Collection, which includes many titles by Ozu and Kurosawa. 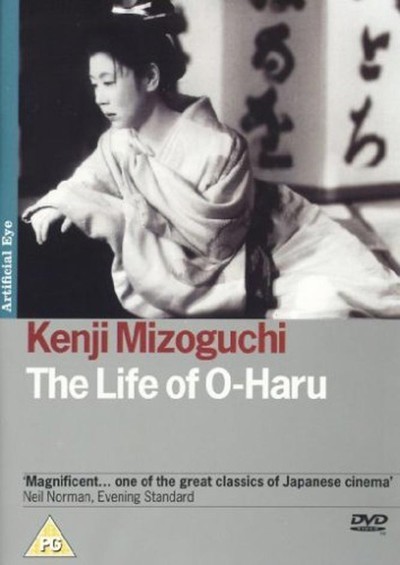