The big Oscar winners on Sunday night? Leonardo DiCaprio, Pulitzer-winning journalism, almost anyone who worked behind the scenes on “Mad Max: Fury Road” and the Girl Scouts.

As these eclectic lists suggest, you can describe the 88th edition of the Academy Awards in multiple ways.

"Unpredictable," for one, especially when the time came for the winner to be announced for the final category of the night. It was a rare case when three titles—“The Big Short,” “The Revenant” and “Spotlight”—were all considered to be equal possibilities to win the most-coveted category based on results from earlier contests. Tom McCarthy's “Spotlight,” an early favorite on the fall film-fest circuit that recounts how the Boston Globe exposed the cover-up of a widespread scandal involving pedophile Catholic priests, had enough staying power to beat out the two December releases to take the win.

Even more unusual for the year’s best, “Spotlight” claimed only one other award among its six nominations—Best Original Screenplay. You have to go back to 1952’s circus extravaganza, Cecil B. DeMille’s “The Greatest Show on Earth,” to find another Best Picture champ that won less than three awards total (it also took Best Story).

Meanwhile, the housing crisis dramedy “The Big Short”—which was up for five Oscars—made do with its lone victory for Best Adapted Screenplay. “The Revenant,” a grueling wilderness tale of survival that came into the night with the most nominations with 12,  settled for winning three honors: Best Director for Alejandro G. Iñárritu (his second win in the category in a row following last year’s "Birdman"), Best Cinematography (a third win in a row for Emanuel Lubezki after "Birdman" and "Gravity") and Best Actor for Leonardo DiCaprio. 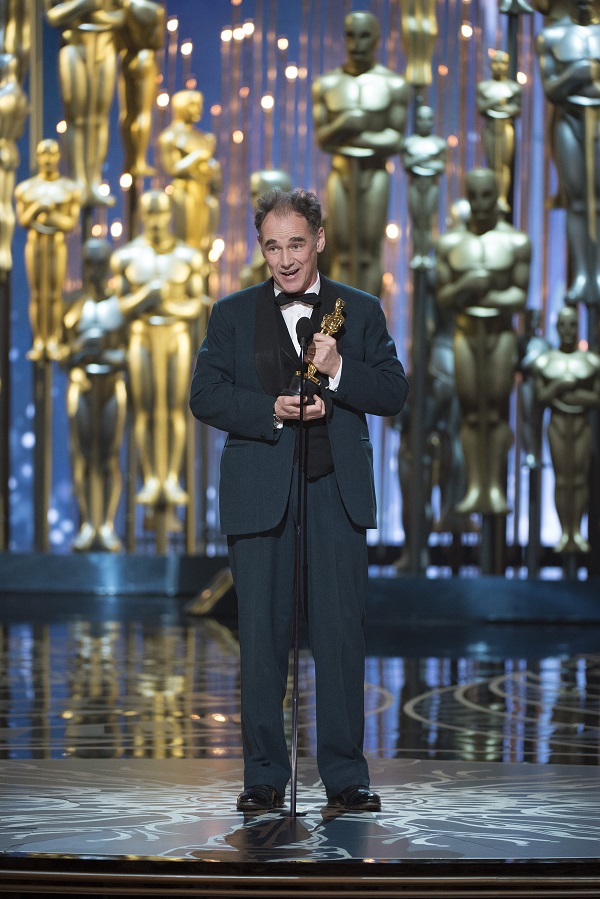 The most unexpected upset? Stallone might have seemed like a safe sentimental bet to take the supporting actor prize for his seventh outing as boxer Rocky Balboa, the role that jump-started his rise to stardom 40 years ago. Instead, he got knocked out by British stage veteran Mark Rylance, who was rewarded for his performance as a Russian secret agent during the Cold War in "Bridge of Spies."

On the other hand, some outcomes were utterly predictable after the nominees won a string of other awards contests this season. No surprise when DiCaprio finally got his long-overdue gold trophy on his fifth try for his physically demanding performance. Oscar newbie Brie Larson was duly honored for her devoted mother in “Room.” Alicia Vikander, who impressed in several films last year including “Testament of Youth” and “Ex-Machina,” won for her role as the supportive wife of one of the first recipients of sex-change surgery in “The Danish Girl.”

It also felt pre-ordained that 87-year-old composer and spaghetti-Western specialist Ennio Morricone finally won his first Oscar on his sixth attempt for his “The Hateful Eight” score. And “Mad Max: Fury Road” bulldozed through most the technical categories. The dystopian action sequel to three previous “Mad Max” outings collected six honors—costume design, hair and makeup, production design, sound editing, sound mixing and film editing—while ceding cinematography to “The Revenant” and visual effects to the futuristic robot thriller “Ex-Machina.” The mid-show run was spearheaded by 70-year-old Australian director George Miller, whose previous “Mad Max” chapter was 31 years ago. He was thanked many times but never got to say a word on air. His streak also provided a moment of humor for presenter Louis CK who opened the envelope to reveal the Best Documentary Short winner and slyly announced, “And the Oscar goes to … ‘Mad Max’?”

As for the actual show itself, the looming question mark was how would Chris Rock, who proved shaky during his first Academy Awards hosting stint in 2005 (remember his poorly received dig at Jude Law’s ubiquity in films?), address the uproar over the year’s all-white lineup in the four acting categories? 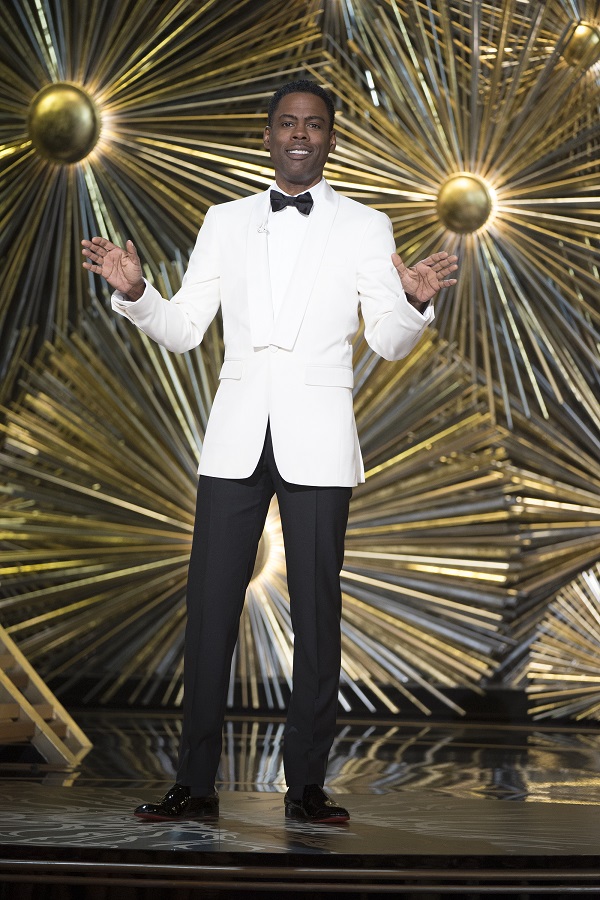 The answer is early and perhaps way too often, considering how up and down his material was. Rock didn’t just immediately acknowledge the D-word elephant in the room. He rode that pro-diversity pachyderm all night long with various pit stops for comic relief that addressed the uproar, seeing the pros and cons on each side.

Following a montage of clips from 2015 films both nominated and otherwise, he opened strong with a monologue that immediately dispersed the tension in the cavernous Dolby Theatre. “I counted at least 15 black people in that montage,” he noted before referring to the show as “the White People’s Choice Awards.”

Rock also scored some nitty-gritty historical points when he noted that this year was barely unique in excluding non-white talent. “It’s the 88th Academy Awards, which means this this ‘no black nominees’ thing happened at least 71 times before. You got to figure it happened in the ‘50s, in the ‘60s.” He observed there were no protests during those decades. “Why? Because we had real things to protest at the time. We were too busy being raped and lynched to care about who won Best Cinematographer.”

He took a rather racy jab at those talents who decided to publically proclaim they were boycotting the ceremony by zeroing in on Pinkett Smith. “Everybody went mad … Jada got mad. Jada said she’s not coming. Isn’t she on a TV show? Jada boycotting the Oscars is like me boycotting Rihanna’s panties. I wasn’t invited.” And he aimed a dig at her husband, Will Smith. “Jada’s mad her man Will was not nominated for ‘Concussion.’ I get it. It’s not fair that Will was this good and didn’t get nominated. You’re right. It also isn’t fair that Will was paid $20 million for ‘Wild Wild West,’ OK?”

Rock got the fancy-dressed attendees on his side quickly but the rest of the evening was slightly less successful. In the not-bad category was a trio of clips that inserted a black character into three of the nominees for Best Picture.  Whoopi Goldberg showed up as a mop-wielding janitor in "Joy," Leslie Jones took on the role of the bear that mauls DiCaprio, attacking him viciously while decrying, “My agent called you twice. I called you 16 times! You should’ve called me back.” Meanwhile, Rock himself showed up as an astronaut in "The Martian" while NASA officials Jeff Daniels and Kristin Wiig debated whether it was worth the $2,500 price tag to bring the stranded black spaceman back to Earth.

But the always-sublime Angela Bassett’s presence was wasted on a lame tribute spoof to the career of Jack Black. Even worse was when black actress Stacey Dash appeared onstage and simply wished everyone in attendance “Happy Black History Month!” Few in attendance seemed to know that she recently caused a ruckus by publicly declaring that there was no need for such a celebration of the past.

The biggest irony of the evening, however, was that the obvious attempt by the Academy to recruit every available person of color and ethnic group to be presenters probably resulted in one of the most diverse gatherings of celebrities ever to participate on an Academy Awards show. Everyone from Lee Byung-hun from “Terminator Genisys” and “An Officer and a Gentleman” Oscar-winner Louis Gossett Jr. to Dev Patel of “Slumdog Millionaire” and Sofia Vergara from “Modern Family” helped hand out the statuettes. Even Sacha Baron Cohen resurrected his obnoxious white rapper Ali G for the occasion. 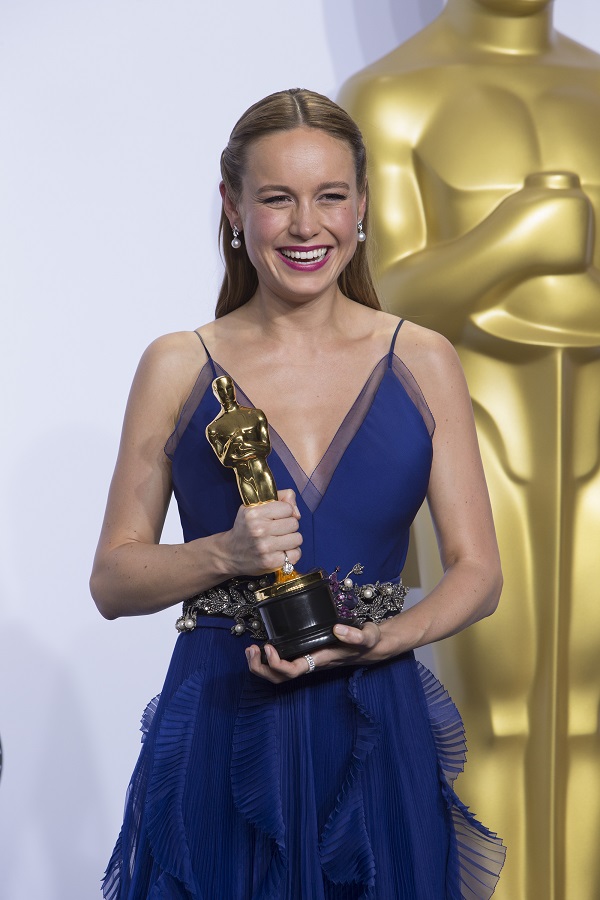 But the most interesting turn of events came via the nominees themselves. Given that at least three were concerned with sexual abuse—Best Picture candidates “Spotlight” and “Room” as well as the nominated song “Til It Happens to You” from the campus-rape documentary “The Hunting Ground”—the topic was front and center most of the night. While it lost to the latest James Bond ballad from “Spectre,” “The Writing’s on the Wall” by Sam Smith, the angry ballad became one of the show’s highlights when it was passionately performed by Lady Gaga, who co-wrote the song with Diane Warren. Not only did Vice President Joe Biden give a special intro that promoted sexual assault activism site Itsonus.org, but survivors appeared near the end of the song alongside the singer, a survivor herself.

Many other issues were aired via acceptance speeches. “Mad Max” costume designer Jenny Beaven, who made an anti-fashion statement by wearing a leather jacket emblazoned on the back with a bedazzled skull logo, warned that the film’s scary resource-depleted universe could become reality if we aren’t careful. Similarly, DiCaprio used his time onstage once again to urge others to care for the environment and get serious about climate change.

Singer-songwriter Sam Smith might have been wrong in his declaration that no other openly gay man has ever won an Oscar before. There have been at least two others in the song category alone: Stephen Sondheim took home the gold for “Sooner or Later (I’ll Always Get My Man)” from 1990’s "Dick Tracy" and Elton John won for “Can You Feel the Love Tonight” from 1994’s “The Lion King.” But Smith, acknowledging he might be mistaken, dedicated his prize to the LBGT community in any case.

Powerful statements were even delivered from winners in the less-glitzy categories. Pakistani director Sharmeen Obain-Chinoy, who claimed her second documentary short Oscar for “A Girl in the River: The Pride of Forgiveness,” declared that the film about a young girl who survives an honor killing has already had impact in her homeland. “This week, the Pakistani prime minister has said that he will change the law on honor killings after watching this film.”

Mexican filmmaker Iñárritu used his time in the spotlight as the first director to take back-to-back Oscars in 65 years to make a plea for more equality and understanding. He quoted a line from his film that is spoken by DiCaprio’s character to his mixed-race son: “They don’t listen to you, they just see the color of your skin.’”

He declared that it was “a great opportunity to our generation to really liberate ourself from all prejudice and … this tribal thinking, and make sure for once and forever that the color of the skin becomes as irrelevant as the length of our hair.”

Throughout the night, despite having the opportunity to acknowledge others in a line of text scrolling on the bottom of the TV screen, many winners still felt the need to ramble through a litany of thank-you’s. But perhaps this protest was just what this too-often stodgy endurance test of a showbiz ritual needed to become more relevant in such evolving and uncertain times.