"So, OK, you're probably like - what is this, a Noxzema commercial? First words of "Clueless" That's exactly what I was like. The hand-held camera was tilting crazily, showing the sun-blessed teenagers of Southern California, and I'm like - what is this, an MTV video? Then Cher says the line and breaks the ice. Not Cher who won the Oscar. Cher, the heroine of this movie. A little later, she explains that she and her friend Dionne "were both named after great singers of the past that now do infomercials." (She adds, "She's my friend because we both know what it is to have people be jealous of us.") "Clueless" is a smart and funny movie, and the characters are in on the joke. Cher (Alicia Silverstone), who lives in a mansion and looks like Cybill Shepherd, is capable of lines like, "Why learn to park when every place you go has a valet?" But she puts a little satirical spin on them. She is one of the most totally self-absorbed characters in a movie since the heroes of "Wayne's World," and yet she isn't a victim, and we get the idea she will grow up tough and clever, like her dad (Dan Hedaya).

He's a big-time lawyer, a litigator who is always working on big cases. In most movies like this, he would therefore be a blundering, insensitive oaf with a microscopic IQ. Not here. He knows everything that's going on, cares for his daughter, is protective of her, and tells a kid taking her out on a date: "If anything happens to her, I got a .45 and a shovel. I don't think you'll be missed." Also looking out for Cher is her stepbrother (Paul Rudd) by one of her dad's earlier marriages. Family trees have many branches in these circles.

Cher and Dionne live in Beverly Hills and go to one of those high schools where the students look like they've posed for the cover of Sassy. They have longsuffering teachers such as Mr. Hall (Wallace Shawn) and Miss Geist (Twink Caplan), who both give Cher bad grades.

She is not discouraged. She knows that happy teachers give higher grades, and convinces each teacher that the other is a secret admirer. "You negotiated your way from a C to an A?" her dad asks.

"Honey, I couldn't be happier than if they were based on real grades." Cher doesn't have a regular boyfriend. Then she gets a crush on a new kid named Christian (Justin Walker) and explains the wiles she will use to capture him. At the same time, she persuades Dionne (Stacey Dash) to help her increase the popularity of a hopeless new girl named Tai (Brittany Murphy). She explains her party strategy: Pretend to be having a good time, pretend not to notice the guy you're interested in, and laugh and dance a lot. Also, "sometimes you have to show a little skin. This reminds guys of being naked, and then they think of sex." The movie was written and directed by Amy Heckerling, who made "Fast Times at Ridgemont High" (1982). This film, about different kinds of kids in a much different kind of school, is much better. But like the earlier film, which introduced Jennifer Jason Leigh, Sean Penn, Phoebe Cates, Forest Whitaker and Judge Reinhold, it may make some stars.

Alicia Silverstone and Stacey Dash display the knack of suggesting that their characters are not limited by their airhead dialogue and teen queen behavior. They talk that way, and do those things, but with a sly humor that suggests they're putting themselves on. ("What'd you do in school today?" "Broke in my purple clogs.") And their motives are essentially pure. They want to help out poor Tai because she doesn't have a clue. After they have completed their makeover of her face and wardrobe and given away all their boy-catching tricks, Tai becomes popular and not very nice. And in the way the girls handle this development, they reveal some quiet insights.

The movie is aimed at teenagers, but like all good comedies, it will appeal to anyone who has a sense of humor and an ear for the ironic.

Heckerling walks a fine line between satire and put-on, but she finds it, and her dialogue could be anthologized. You have to like a movie with lines such as: "Searching for high grades in high school is like searching for meaning in a Pauly Shore movie." Or this excuse in P.E. class: "My plastic surgeon doesn't want me doing any activity where balls fly at my nose." The answer to that, which cannot be printed here, may be worth at least a third of the price of admission, all by itself. 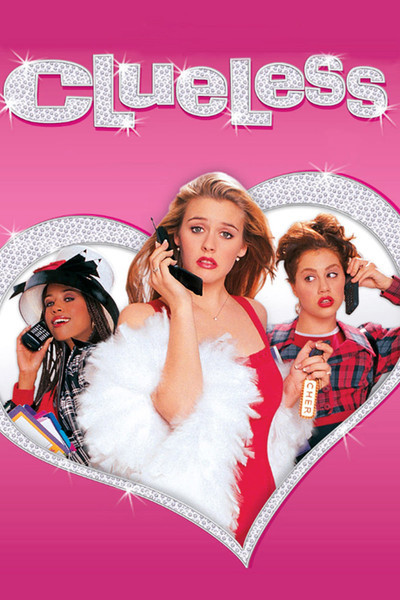