The central thrust of the scattered, clanging and unwieldy “Terminator Genisys” is that the Cloud will destroy us all.

Now, they don’t exactly call it the Cloud, as they do in last year’s “Sex Tape.” But maybe that straining Cameron Diaz-Jason Segel comedy was onto something when it warned us that uploading information and then synching all our electronic devices to each other might be a dangerous thing after all.

Here, this revolutionary but ethereal system is called Genisys. It goes online on a specific day in 2017. (There’s a countdown clock and everything in an effort to magnify the tension.) It’s even a pleasing shade of light blue. And while it promises to link your phone, tablet, laptop, etc., the convenience it offers might come at a cost. It might, you know, mean the end of the world as we know it.

We’re all on our devices too much, anyway – heads down, necks craned, eyes glazed, clueless to our surroundings and careless about other actual people. The corporate behemoth behind “Terminator Genisys” certainly would never suggest that you order your movie tickets online from your smartphone. And you probably shouldn’t tweet or take an Instagram photo or post on Facebook about the movie afterward. Because that’s how the machines will finally win – if they haven’t already.

Director Alan Taylor offers a parable that aims to have its cake and eat it too along the lines of this summer’s “Jurassic World,” a similarly mediocre reboot of a groundbreaking action franchise, which warned us of the dangers of corporate greed within a blockbuster crammed with product placement for Mercedes-Benz and Samsung and Beats by Dre. Great science fiction strives to illuminate our daily lives through fantastical scenarios. “Terminator Genisys” kinda-sorta tries to make a point about our reliance on technology while using glossy, 3-D imagery to milk pop-culture nostalgia: namely, the sight of Arnold Schwarzenegger once again kicking butt and making puns in the role that made him a superstar over 30 years ago.

Admittedly, it’s an amusing return at first. Ah-nuld is older now, but as his Terminator character repeatedly insists throughout film, he’s not obsolete. But watching him revisit the role at this stage in his life and career – the former California governor is nearly 70 now – too often feels like a recycling of greatest hits. You’re sort of happy to hear these tunes, but they don’t sound nearly as fresh as they once did.

Taylor and his team have recreated with great care specific scenes from James Cameron’s original “Terminator,” including the moment when Schwarzenegger’s character arrives naked at Griffith Observatory and confronts a group of punks. But then, this ultimately morphs into a Terminator-on-Terminator showdown, with the younger Schwarzenegger fighting his current self across generations.

Because you see, “Terminator Genisys” messes with the timeline – or, rather, timelines. The script from Laeta Kalogridis and Patrick Lussier indulges in multiple and intersecting time-travel streams with varied and complicated outcomes. It makes sense for a while if you think about it hard enough – and if precision matters to you within the internal logic of time-travels movies in general. But then a character delivers a line to his younger self in the absolute last scene that negates everything that came before it. It breaks the rules, and it feels like a cheat.

“Terminator Genisys” begins, though, in 2029. Judgment Day has happened. Skynet woke up in 1997, the machines started thinking for themselves and three billion people died in the ensuing nuclear annihilation. The leader of the surviving revolutionaries, John Connor (played this time by steely-eyed Australian actor Jason Clarke), sends his right-hand man, Kyle Reese (Jai Courtney), back in time to protect Connor’s waitress mom, Sarah Connor, from the Terminator that’s on a mission to kill her. The basic tenets of the mythology should be familiar to you if you’ve seen the previous four films in the series (and if not, Kyle catches you up in a long opening voiceover).

But something happens as Kyle is being zapped back to 1984: a glitch, both inside and outside the machine, which causes a tweaked timeline upon his arrival. Sarah (“Game of Thrones” actress Emilia Clarke, trying mightily to summon some of Linda Hamilton’s grit) knows who Kyle is and knows why he’s come. Schwarzenegger’s Terminator is now her friend – actually, he’s a father figure, so much so that she lovingly calls him Pops. So now they all must learn to trust each other and work together to stop the apocalypse.

This results in several exciting moments within its elaborate battles and chases and set pieces, as well as some genuine suspense. And the effects are consistently cool, although they aren’t too terribly different from the liquid metal T-1000 effects that dazzled us in “Terminator 2: Judgment Day” back in 1991. (This time, Korean star Byung-hun Lee functions in the Robert Patrick bad-cop role.) The fate of a school bus dangling precariously off the side of the Golden Gate Bridge – and the people within it – might give you vertigo. And man, has San Francisco been getting hammered lately between “Godzilla,” “Dawn of the Planet of the Apes,” “San Andreas” and now this. (There’s a think piece in there somewhere about Hollywood trying to exorcise the demons of instant high-tech wealth.)

Clarke can be genuinely compelling and even a little enigmatic as John Connor – who, intriguingly, is depicted as far less of a Christ figure than he has been in previous installations. Courtney is blandly hunky in a rare good-guy role. And Emilia Clarke is plucky and likable in the warrior princess role of Sarah Connor, but there’s a softness and a sweetness about her – a girlishness, even – which makes her feel like a Muppet Babies version of the character.

But for better and for worse, this is Schwarzenegger’s show. His performance, and his character’s evolution, are the reasons “Terminator Genisys” turns unfortunately jokey and self-referential, to the point that it borders on parody. Schwarzenegger’s one-liners helped define the franchise in its early years. They were a reflection of this flesh-covered machine’s awkward, heavily accented attempts at assimilating with humans, and they provided much-needed comic relief. Here, when he says “I’ll be back,” it’s more likely to produce groans than grins. Schwarzenegger has turned into your elderly uncle, dancing like a goofball at your wedding after a couple glasses of champagne. He knows he’s being silly, and he knows that you know, and that alone is supposed to be good for a laugh. But it’s not. It’s just sad. He has essentially become McBain.

Clearly, it’s time to say “Hasta la vista, baby,” once and for all. 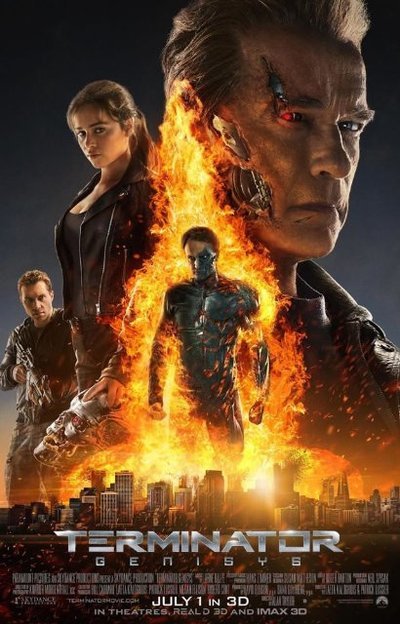