An Officer and a Gentleman

The movie takes place in and around a Naval Aviation Officer Candidate School in Washington state. Every thirteen weeks, a new group of young men and women come here to see if they can survive a grueling session of physical and academic training. If they pass, they graduate to flight school. About half fail. Across Puget Sound, the local young women hope for a chance to meet an eligible future officer. They dream of becoming officers' wives, and in some of their families, we learn, this dream has persisted for two generations.

After the first month of training, there is a Regimental Ball. The women turn out with hope in their hearts and are sized up by the candidates. A man and a woman (Richard Gere and Debra Winger) pair off. We know more about them than they know about one another. He is a loner and a loser, whose mother died when he was young and whose father is a drunk. She is the daughter of an officer candidate who loved and left her mother twenty years before. They dance, they talk, they begin to date, they fall in love. She would like to marry him, but she refuses to do what the other local girls are willing to do -- get pregnant or fake pregnancy to trap a future officer. For his part, the man is afraid of commitment, afraid of love, incapable of admitting that he cares for someone. All he wants is a nice, simple affair, and a clean break at the end of OCS.

This love story is told in counterpoint with others. There's the parallel affair between another candidate and another local girl. She is willing to trap her man. His problem is, he really loves her. He's under the thumb of his family, but he's willing to do the right thing, if she'll give him the chance.

All of the off-base romances are backdrops for the main event, which is the training program. The candidates are under the supervision of a tough drill sergeant (Lou Gossett, Jr.) who has seen them come and seen them go and is absolutely uncompromising in his standards. There's a love-hate relationship between the sergeant and his trainees, especially the rebellious, resentful Gere. And Lou Gossett, Jr. does such a fine job of fine-tuning the line between his professional standards and his personal emotions that the performance deserves its Academy Award.

The movie's method is essentially to follow its characters through the thirteen weeks, watching them as they change and grow. That does wonders for the love stories, because by the end of the film we know these people well enough to care about their decisions and to have an opinion about what they should do. In the case of Gere and Winger, the romance is absolutely absorbing because it's so true to life, right down to the pride that causes these two to pretend they don't care for each other as much as they really do. When it looks as if Gere is going to throw it all away -- is going to turn his back on a good woman who loves him, just because he's too insecure to deal with her love -- the movie isn't just playing with emotions, it's being very perceptive about human behavior.

But maybe I'm being too analytical about why "An Officer and a Gentleman" is so good. This is a wonderful movie precisely because it's so willing to deal with matters of the heart. Love stories are among the rarest of movies these days (and when we finally get one, it's likely to involve an extra-terrestrial). Maybe they're rare because writers and filmmakers no longer believe they understand what goes on between modern men and women. "An Officer and a Gentleman" takes chances, takes the time to know and develop its characters, and by the time this movie's wonderful last scene comes along, we know exactly what's happening, and why, and it makes us very happy. 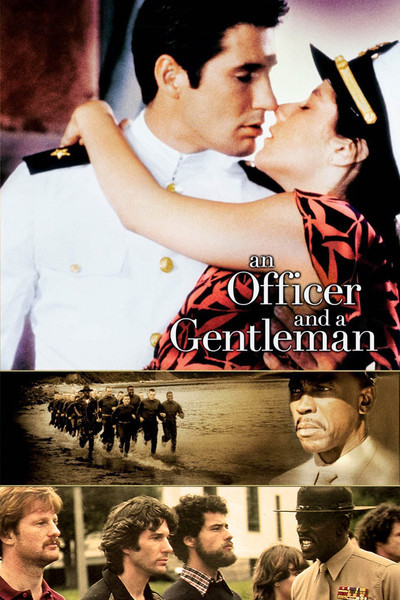