Alfonso Cuarón's "Gravity," about astronauts coping with disaster, is a huge and technically dazzling film. Watching Sandra Bullock and George Clooney's spacefarers go about their business, you may feel—for the first time since "The Right Stuff," perhaps—that a Hollywood blockbuster grasps the essence of  a job that many can't imagine without feeling dizzy. The panoramas of astronauts tumbling against starfields and floating through space stations are both informative and lovely.

But the most surprising and impressive thing about "Gravity" isn't its scale, its suspense, or its sense of wonder; it's that, in its heart, it is not primarily a film about astronauts, or space, or even a specific catastrophe. At times it plays like a high-tech version of shipwreck or wilderness survival story that happens to take place among the stars, and that would fit nicely on a double-bill alongside "Deliverance," "127 Hours," "Cast Away," "Rescue Dawn" or the upcoming "All Is Lost." For all its stunning exteriors, it's really concerned with emotional interiors, and it goes about exploring them with simplicity and directness, letting the actors's faces and voices carry the burden of meaning.  It's a film about what happens to the psyche as well as the body in the aftermath of catastrophe.

Not content to observe the agonizing physical details of the astronauts' struggles, "Gravity" goes deep into the feelings  of one character, Bullock's Dr. Ryan Stone, a first-time space traveller who boards a shuttle alongside Clooney's Matt Kowalski to repair the Hubble telescope. When debris destroys the telescope and their ride home, Ryan finds herself marooned in orbit alongside Kowalski, taking an unasked-for crash course in disaster management, learning all she can from her more experienced partner, struggling to control the anxious heartbeat that flutters on the soundtrack along with her shallow breathing and the sporadic hiss of backpack thruster jets.

"Houston, I have a bad feeling about this mission," Kowalski tells mission control (voiced, in one of Cuarón's only film-buffish in-jokes, by Ed Harris, a veteran of both "The Right Stuff" and "Apollo 13"). We hear Kowalski speak this line for the first of many times during the majestic opening shot. We see space, and Earth—and beyond it, a tiny speck that slowly draws close, revealing the mission, the vehicles, the characters.

In the hands of lesser storytellers, this shot and other, equally striking ones might play like showboating. (The filmmaker and his regular cinematographer, Emmanuel Lubezki, shot numerous films with spectacular long takes, including "Children of Men.") Luckily, Cuarón, who cowrote the script with his eldest son Jonás, roots every moment in a tactile present. The fragility of the body has rarely been spotlit so harshly, throughout the entire running time of a feature. Every time the astronauts move, or don't move, you worry they're going to end up like their colleagues: bodies frozen hard as bricks, faces caved in like pumpkins.

Ryan is our stand-in. The movie makes this notion plain by shifting between points-of-view within unbroken long takes. A lot of the time we're in what you might call third person limited, watching Ryan and Kowalski move through their treacherous environment and taking note of objects drifting with them, some menacing, others oddly poignant: a chess piece, a ballpoint pen, a Marvin the Martian doll, a puff of electrical flame, a lone teardrop. But then, gradually, subtly, "Gravity" will morph into first person, drifting towards Ryan and then seeming to pass through her helmet, edging closer to her face, then finally pivoting so that we're gazing out through her visor, hearing her voice and breath echo inside her suit as she looks for a space station, for Kowalski; for someone, something, anything to grab onto.

Some have already complained that "Gravity" is too melodramatic, too simplistic, too mystical, too something; that once we figure out that it's about the psychology of Ryan, we may write it off as less imaginative than we hoped.  I don't believe such shortcomings—if indeed they are shortcomings—can dent this film's awesomeness. If "Gravity" were half as good as I think it is, I'd still consider it one of the great moviegoing experiences of my life, thanks to the precision and beauty of its filmmaking.

But even if we grant that the movie doesn't have the philosophical ambition of "2001", the space adventure to which it's most often compared, fairness demands we recognize that it's trying for something else. "Gravity" is reminiscent of "2001" mainly because it feels like a feature-length expansion of the sequence in which astronaut Dave Bowman gets locked out of the Jupiter spacecraft without his helmet. Beyond that, it's its own thing, and its storytelling is as simple as its visuals are complex. A surprising number of scenes are theatrically spare: just people talking to each other, telling stories, painting mental pictures for us.

For long stretches, Cuarón trusts Bullock to give us a one-woman show, and she delivers. Her work here constitutes one of the greatest physical performances I've seen, and she's framed in ways that make each moment resonate. The way she twists and turns and swims through zero gravity is a master class in how to suggest interior states with gestures. An image of Ryan curled up womblike in zero gravity packs a primordial wallop: it's a dream image dredged from the Jungian muck. Some of the shots of Bullock's face through her helmet visor evoke Carl Dreyer's "The Passion of Joan of Arc," the film that perfected the emotionally expressive closeup. "Gravity" evokes that silent classic and others—including Maya Deren's experimental short "Meshes of the Afternoon," whose most analyzed sequence, a series of shots boiling evolution down to four gestures, might have influenced the unabashedly metaphorical closing scene of  Cuarón's movie.

If anyone asks me what "Gravity" is about, I'll tell them it's a tense adventure about a space mission gone wrong, but once they've seen and absorbed the movie, they'll know the truth. The root word of "Gravity" is "grave." That's an adjective meaning weighty or glum or substantial, but it's also a noun: the place where we'll all end up eventually. The film is about that moment when you suffered misfortune that seemed unendurable and believed all hope was lost and that you might as well curl up and die, and then you didn't. Why did you decide to keep going? It's is a mystery as great as any in physics or astronomy, and one we've all grappled with, and transcended. 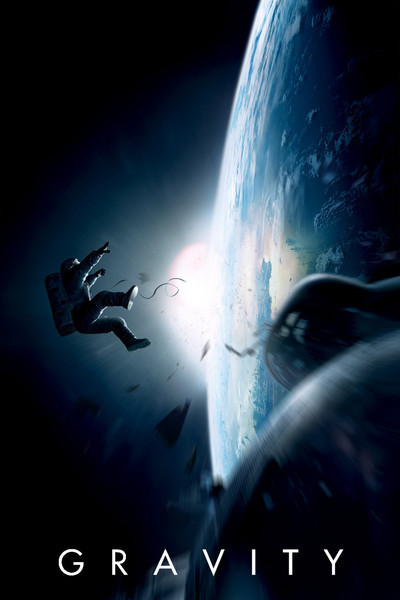